A vast collection of Vivian Maier’s stunning city street photos were discovered after her death and can now be viewed online and in national exhibitions. So who was this talented woman and why did she keep her photography secret? Finding Vivian Maier attempts to answer these questions, though we only get a glimpse of this mystery woman through the eyes of those who knew her. Some hired her as a nanny, some are the grown children who were once in her charge. Many recall her fondly, a few have darker memories, but no one knew her intimately because that was the way Vivian Maier wanted it. 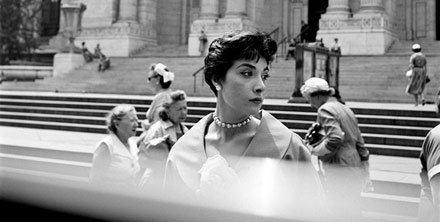 ﻿﻿One of Maier’s street photos in which the subjects had no idea they were being photographed.

Carrying her Rolleiflex twin-lens camera, Maier captured the anonymous faces on the streets of Chicago, New York, and cities overseas, in dazzling and intimate street-scene snapshots. And because her twin-lens camera did not require holding at eye level, it gave Maier the freedom of invisibility to her subjects who mostly seem unaware that they’re being photographed.

Real estate agent John Maloof stumbled on a collection of Maier’s photos, which he purchased at an auction for some historical research. But curiosity about the photographer led him to seek out the rest of Maier’s work, and he’s now the proud curator of thousands of her photos, many of which are still in undeveloped rolls. Together with Charlie Siskel, Maloof created this incredibly well-structured documentary that’s brimming with intrigue and extraordinary images by one of the most talented photographers the world has never known. B+