Julian Lage has been playing guitar since he was five years old. At age eight, he jammed with Carlos Santana and was the subject of the Academy Award- nominated documentary Jules at Eight. He performed at the 2000 Grammy Awards at age 13, and his debut disc Sounding Point was nominated for a Best Contemporary Jazz Album Grammy in 2010. The former child prodigy is currently touring with bluegrass maven, fellow guitarist, and Punch Brothers cofounder Chris “Critter” Eldridge.

I spoke to the duo as they drove in Connecticut on their current tour, which will bring them to CSPS in Cedar Rapids on May 6. Lage did the talking, as Eldridge drove the vehicle, although every once in a while I could hear Eldridge make a comment, such as when Lage called him Chris and he broke in with a chuckle, “Tell him the name is ‘Critter,’ and the name is legendary.” Lage dryly commented, “You heard that, right?” and then continued to discuss how the two musicians got together. 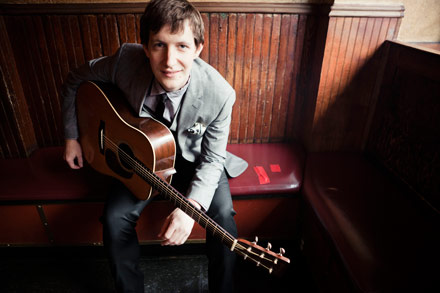 “We met at a Punch Brothers show at the Boston Museum of Art,” Lage said. “I was a friend of mandolinist Chris Thile [of the Punch Brothers and Nickel Creek] and was impressed by the way Critter played. It was sort of love at first sight. We started to play together as if we were just fooling around, but we both felt the spark. That was two years ago, and we were finally able to make it happen.” The duo recently released their first EP, Close to Picture, to critical praise.

The pairing of contemporary jazz and bluegrass may seem odd, but Lage said it seemed natural to them. “They both evolv-ed out of improvised musical styles and flat-picking guitar traditions,” he said. Still, he was aware of the differences, such as the fact that both guitarists share a microphone on stage. The proximity to each other brings a natural intimacy to the performance.

“However, the biggest shift is one of proportions,” Lage noted. “When I perform a jazz set, I might do five songs per  hour plus. That allows one to really extemporize. However, bluegrass songs are only two to three minutes long, or 17 songs per set.” Lage and Eldridge’s songs tend to run around four minutes long. The jazz influence on the mostly bluegrass style can be keenly heard.

When questioned about bluegrass musicians’ ability to ad-lib and invent while the songs are so short, Lage jumped in, “My god, of course they can!” He explained that while jazz and bluegrass depend on impeccable playing, making blunders and exploring them lie at the heart of both genres. “Jazz great Ornette Coleman said something like, the day he realized making mistakes was part of it, that’s when the music opened up to him. That’s what connects all of us musicians and even non-musicians together. It’s the things that we’re not great at. It’s the things we struggle with that we can empathize with each other over.”

He paused for a moment and continued, “On a good day I can capitalize on it. I can transform a mistake into something special. People spend so much energy trying to not look bad. There’s a big difference between investing in not sucking and investing in actually being a musical explorer.” Lage spoke in a firm yet gentle voice, with conviction in the power of music as an agent of discovery and a way to bind humanity. Eldridge grunted agreement from the driver’s seat, and the two were clearly in accord on this point.

Lage and Eldridge both play 1939 Martin guitars. They attribute their connection   in part to their two instruments sharing a common lineage. “It’s just the two of us onstage, and with the acoustic guitars we soak up the space quite comfortably. We don’t need a bass or drums to fill out the sound,” Lage said.

Eldridge also contributes vocals on many of the tunes. The two also play electric guitar but not in this musical incarnation. While Lage and Eldridge may be together for now, they both have future commitments with other bands and artists in each of their respective genres. Audiences should expect an all-acoustic show when the pair come to CSPS on May 6.

For the moment, the two men look forward to coming to the Midwest and performing for mostly unfamiliar audiences. Lage said he had played at the Maintenance Shop in Ames a few times, but spent most of his time touring on the coasts. “There is something special about being in the middle of the country,” Lage noted.

Hoping to avoid speaking in clichés or just hyping his current tour, Lage grappled with finding the right words to say. “Let me just put it this way. We communicate through music. That’s why every time we play, the music is different, because every place is different. The people are different. The music we perform will be distinctive just because we are playing somewhere we haven’t played before, for people who may have never seen or heard us. That can make something extraordinary happen.”

Critter offered no comment, but I am sure he agreed.

Under the Skin: Mysterious & Otherworldly | A Sci-Fi Thriller That's Puzzling ... in a Good Way