Jack (Kiefer Sutherland) hides out from the CIA operatives chasing him in 24: LIVE ANOTHER DAY, airing Monday, May 5. (©2014 Fox Broadcasting Co., Daniel Smith/FOX)

Counterterrorism agent Jack Bauer (Kiefer Sutherland) returns for another season of 24, but not as a hero this time (Monday, 8 p.m., Fox). Bauer has been a fugitive during the series’ four-year hiatus, hunted by the U.S. and Russia for a vengeful killing spree. He turns up in London during a visit by the President (William Devane) and comes to the attention of the CIA. A disgraced agent (Yvonne Strahovski) realizes the significance of his presence before anyone else does. “He’s up to something,” she surmises.

Sutherland barely says a word during the episode, but he makes an impression with his scowling intensity. Strahovski can hold her own in an espionage setting, having cut her teeth on Chuck. And the script delivers an urgent hour of secrets and betrayals, fistfights and fireballs.
Per 24 tradition, the episode is set in real time, complete with a digital clock ticking off the minutes. With most series the clock gimmick would be disastrous, reminding you how long an hour can be when you’re bored. But it’s no problem whatsoever in 24. Time flies when you’re having fun.

Edie Falco is the rare actor who’s created not one, but two unforgettable TV characters. The Carmela Soprano story has run its course, but luckily for us, the tragicomedy of Nurse Jackie Peyton is in full swing. Season six is another parade of grim events, as Jackie slides back into drug addiction. She steals pills from the hospital where she works; she covers up; she embarrasses herself in front of friends and family. I don’t know how, but the episodes still make us laugh.

This week Jackie meets her ex-husband’s fiancée, who just happens to be perfect. Meanwhile, she hits a bump in her romance with Frank (Adam Ferrara) when he makes a shocking confession about his relationship with his ex-wife and kids.

“I cannot be in a relationship that’s based on secrets and lies!” Jackie responds.

Really? If Jackie’s own life were suddenly free of secrets and lies, Nurse Jackie would have to shut down production in mid-season.

Another week, another brilliant episode of the nerd-tech satire. Newly minted CEO Richard (Thomas Middleditch) and his housemates want their startup to be different from all the others in Silicon Valley in terms of corporate culture. That’s why they’re running it out of their living room, with no structure whatsoever. "We are punk rock!" crows one of the coders. But Jared (Zach Woods), a straight arrow who recently joined the company, disagrees. "We need to operate like a business," he insists.

This plot point allows creator Mike Judge to lampoon the workplace-efficiency racket. Before long, Jared has instituted the latest human-resources fad, a system involving "rule-based filtering" and "stories rather than tasks."

Does punk rock stand a chance against rule-based filtering in our new high-tech utopia? Tune in for the thrilling conclusion. 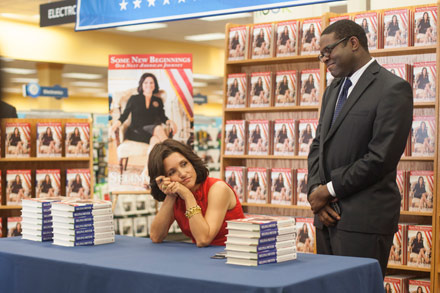 Julia Louis-Dreyfus may well be on her way to a third Emmy with the new season of her cynical political satire. This week, Vice President Selina Meyer launches her presidential campaign with a dysfunctional staff that can barely handle office politics, much less national politics. Selina herself is all smiles in public while stewing in bitterness behind the scenes. With maximum sneakiness, she searches for a campaign manager and tries to talk a political rival into skipping the race.

There’s no milk of human kindness in this version of Washington, D.C., only insincerity, power plays and hostility. But it all goes down easy thanks to the wicked dialogue. Speaking to an aide, Selina casually admits that she set her ex-husband’s car on fire after they broke up.

"I torch cars," she giggles, in a misguided attempt at presidential self-deprecation. "Give me the nuclear codes!"

I’m sure that, in real life, the nuclear codes are in the hands of politicians much more mature that Selina Meyer. Right…?

It’s the fifth and final season of the series about agents who oversee the world’s magical artifacts. Like many supernatural TV shows at the end of their run, it’s entered a silly phase – think of the late-period Bewitched plotline where Samantha traded wisecracks with the Loch Ness Monster in Scotland. In this week’s episode, a supernatural brooch sucks Pete (Eddie McClintock) and Myka (Joanne Kelly) into a TV set, where they become characters in a cheesy Mexican telenovela called Savage Seduction. They speak in Spanish (with subtitles), wear sultry costumes and overact with guest star Sonia Braga.

As I said, silly. But it’s an undeniably fun night of TV – as was that Scottish episode of Bewitched, now that I think of it.