The paintings of Johannes Vermeer are considered masterpieces of color and light that set them apart from all other works of art. How Vermeer managed to capture so much detail onto his canvas in the 1600s, long before the invention of the camera, has been a mystery to art historians. And for inventor Tim Jenison, this mystery became an obsession that he determined to unravel. Illusionists Penn & Teller—friends of Jenison—documented his quest in Tim’s Vermeer, a journey that will boggle your mind, not only because Jenison sheds light on this age-old question but because of the magnitude of the project that not even a team of craftsmen would have tackled. 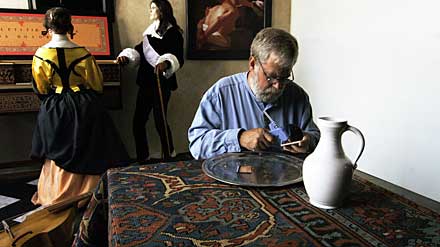 This documentary has two interesting subjects. Vermeer was a scientific pioneer whose paintings capture an infinity of minute details, unlike any other artist of his time. And Tim Jenison is a pillar of determination, know-how, and do-it-yourself spirit who can think big and small at the same time.

Residing in San Antonio, Texas, Jenison is the ultimate renaissance guy who’s been taking things apart since he was a kid just to see how they worked. And as an inventor and successful entrepreneur, he’s even more fascinating than the techniques of Vermeer. Tim’s determination defies the limits of human attention, especially in these digital days of distraction when most of us can barely hold a single focus for a few minutes at a time. Jenison has endless persistence, concentration, and most of all, patience, with little regard for how complex his project became or how many years it took. Jenison demonstrates our human potential, the vast scope of understanding that we’re capable of, and the healthy innate curiosity that spurs us into productive action, which keeps us growing as individuals and keeps civilization moving forward. His brain belongs in the Smithsonian. When he’s done with it. A

Don't Call Me Old! 80-Something Shares Tips for a Full Life