Artist Marvin Cone lived in Cedar Rapids, married, raised a family, and taught at Coe College. Although he never achieved the fame of his longtime friend Grant Wood, he was clearly a skilled artist and an important figure in American painting. His life and work will be explored in a lecture entitled "Marvin Cone: Quiet Integrity" on Thursday, May 15, at the Muscatine Art Center.

Marvin Cone maintained long friendship with Grant Wood. The two met in high school, traveled to Paris, attended the Art Institute of Chicago, and joined forces in the summer of 1932 and 1933 to create Stone City Art Colony. Each followed a different path, but they did influence each other.

After graduating from Coe College with liberal arts degree, Cone attended the Art Institute of Chicago with Grant Wood. Both joined the army during World War I. Because Marvin Cone could speak French, he was selected to attend the University of Montpellier, France, in February of 1919 before returning home. Marvin returned to Cedar Rapids to teach French at Coe College. The following summer Cone and Wood traveled to Paris, London, Liverpool, and Antwerp. Both painted in the Impressionistic style and held an exhibition of their artworks on the ship as they return to Cedar Rapids.

On the same return trip home, Grant Wood introduced Marvin to Winnifred Swift, whom Marvin married in 1921. Winifred and Marvin had one daughter, Doris. 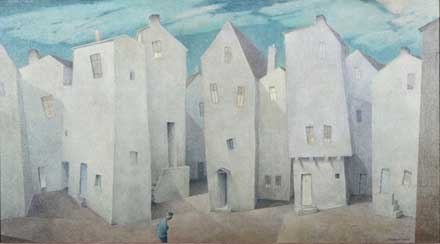 During the 1920s, Cone started the art department at Coe College and kept an active schedule of exhibitions with the Cedar Rapids Art Association. At the time, Cedar Rapids was a thriving atmosphere for the arts, and in 1928, the American Federation of Arts and Carnegie Foundation provided a $50,000 grant to open The Little Gallery, with Edward Rowan hired as a trained museum administrator. Rowan arranged for Cone and his wife to go back to Paris in 1929. In 1930, Grant Wood, received the Art Institute award for American Gothic and became famous.

Throughout his life, Marvin Cone moved through a series of styles: landscapes, haunting interiors, barns, circus scenes, and finally, abstract images. Unlike artists associated with regionalist and American scene painting of the 1930s, Marvin Cone would integrate his firsthand observation and move from realism to abstraction.

Marvin Cone died on May 18, 1965. As a tribute to his forty years of teaching, Coe College established the Marvin Cone Collection. The Cedar Rapids Museum of Art maintains one of the largest collection of Marvin Cone’s works in the United States.

The Lunchbox | A Lovely Little Film, Like a Satisfying Meal