Corey Stoll as Ephraim Goodweather in The Strain (© 2014, FX Networks. All rights reserved.)

Guillermo del Toro (Pan’s Labyrinth) co-wrote and directed the first episode of The Strain, a stylish thriller about a virus with vampiric origins (Sunday, 9 p.m., FX). Dr. Ephraim Goodweather (Corey Stoll), head of a Centers for Disease Control unit in New York City, is called in to investigate the mysterious deaths of 200 airline passengers. We know something he doesn’t: a monster did it, popping out of the cargo hold in the suspenseful opening scene. We meet the spooky characters who do this monster’s bidding, along with an elderly pawnbroker (David Bradley) who fought him during World War II and is prepared to fight him again. The pawnbroker has impressive skills, but he might be no match for gooey tentacles that…well, you really need to see the tentacles in action. My description couldn’t possibly do them justice. 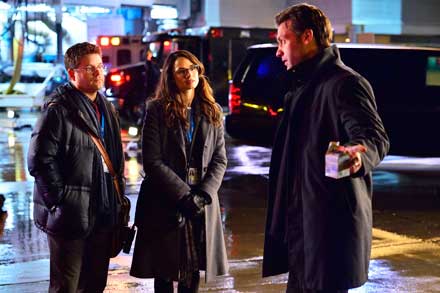 This new series is a superior creature feature. The pilot takes the trouble to characterize Ephraim, a committed professional who struggles to make a commitment to his family. The production deftly manages a large cast while keeping the momentum rolling. Best of all, it mostly uses horror tropes to entertain you rather than to gross you out.

Until The Strain, I thought that was a lost art on cable TV.

Steven Spielberg executive produces this science fiction series, which is so ably written, directed and acted that it hooks you with a relatively understated approach. An astronaut named Molly (Halle Berry) returns from 13 months alone in space, inexplicably pregnant. Molly is married with a son, but she’s haunted by visions of her former lover, a fellow astronaut who died years ago. Meanwhile, she has reason to mistrust the space bureaucracy, which may not have her (or humanity’s) best interests at heart.

Berry graces Extant with her movie-star presence, using subtler acting techniques than we’re used to seeing on the small screen. She’s particularly affecting in the subplot about her son (Pierce Gagnon), who turns out to be a lifelike robot created by her husband (Goran Visnjic). His company has developed a line of empathetic machines, and critics are demanding that he create a backup plan to neutralize them in case they rise up against humans. Having gotten to know the cute little-boy robot, I was horrified at the idea of coldly exterminating him.

Then comes a scene in which the boy gets mad, runs away from Molly and kills a bird in the woods, unable to comprehend how creepy he’s acting.

Okay, maybe he should be exterminated. Immediately. I sense grave danger ahead in Extant.

In this fish-out-of-water sitcom, sad-sack accountant Bruce (Greg Poehler) follows beautiful Swedish girlfriend Emma (Josephine Bornebusch) back to her homeland. The problem is, there’s nothing very funny about being a fish out of water in Sweden. Poehler’s script struggles to make comedy out of saunas and Scandinavian drinking traditions. He doesn’t hold the screen as a comedian, and the fact that he brings in funnier sister Amy as a special guest only highlights the fact that he needs help. Furthermore, you’ll find that squinting to read expository dialogue in subtitles does not put you in a mood to laugh.

I wonder how you say “lotsa luck” in Swedish.

“So many people hate you,” a barmaid tells Harry after he’s ticked off yet another character. “What’s one more?”

Make that two more, including me.

This reality series announces “a radical new social experiment”: allowing a panel of experts to arrange marriages based on scientific methods. Six singles will put their faith in empirical techniques and go through with marrying a complete stranger.

Given the emphasis on cutting-edge science, you might expect the experts to be wearing white lab coats and inputting psycho-biological data into a super-computer. But the series is more dependent on traditional matchmaking methods than it lets on. A sociologist is dispatched to the singles’ apartments to get to know their strengths and weaknesses for the purpose of pairing them up.