A neighborhood where floodwaters raged six years ago has become a Cedar Rapids hot spot, due in part to a new venue with broad appeal.

Since opening in October 2012, the NewBo City Market has become an anchor of New Bohemia, centered along  revitalized Third Street SE, with events like this month’s BBQ & Brew expected to draw thousands of people.

NewBo spokesman Preston Moore noted that last year’s BBQ & Brew attracted more than 8,000 people and was one of the first large-scale events after the market’s opening day, where crowds packed the indoor market—built in a renovated warehouse—from wall to wall.

The warehouse had been a part of the Quality Chef site in Cedar Rapids before the June 2008 flood devastated the neighborhood and other core districts along the Cedar River, including the downtown and Czech Village, across the river from New Bohemia.

Since then, the New Bohemia neighborhood—named for the Czech immigrants who built a mix of homes and businesses here more than 100 years ago—has experienced a resurgence.

While dozens of the historic district’s structures were demolished after the flood, key buildings were renovated and reopened, such as CSPS, a performing arts venue just across from the market at 1103 Third St. SE, and the Cherry Building, 329 10th Ave. SE, which houses a variety of small businesses in loft-style spaces.

NewBo City Market entered the mix to serve as a business incubator for cupcake bakers, budding restaurateurs, and others who vied to open anchor spots inside the market. Outdoor farmers’ markets also are held on-site during the growing season.

More than 350,000 guests have passed through the market’s doors since opening day. A shake-up of the anchor merchants, of sorts, happened last winter, with the market not renewing leases for five of the original businesses, including the sole fresh-produce vendor.

Moore said new vendors are filling that void. Originally open just three days per week, the market has added a day and is now open Thursdays through Sundays.

BBQ & Brew is one of a number of events to attract crowds that spill out to new and old restaurants, bars, and other businesses in the pedestrian-friendly district. Among those events, Moore cited Deck the District, a holiday festival that includes free trolley service throughout the New Bohemia and Czech Village neighborhoods; Eco Fest, an annual Earth Day celebration; New Bo Arts Fest; and the Iowa Humane Alliance Animal Adoption Event in which more than 100 pets were adopted this year. 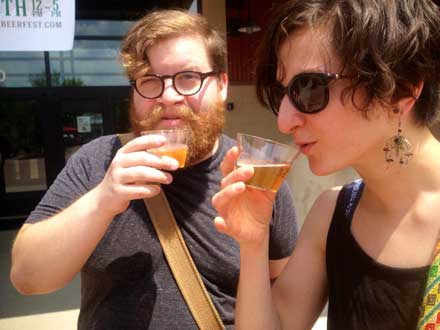 This year’s BBQ & Brew is set for 11 a.m. to 6 p.m. on Saturday, July 19, at the market at 1100 Third St. SE. Panels of judges evaluate the homebrew beer as well as the barbecue, while attendees also cast ballots for their favorite brews.

“This contest is really unique,” said Kent Ball of Solon, a home brewer who won one portion of the contest in the inaugural BBQ & Brew last year. “It’s a fun event.”

Beer-tasting tickets are capped at 500 to make sure everyone who purchases a ticket is able to sample the beer, said Moore, who is coordinating BBQ & Brew. “We are on track to sell out of those tickets by the day of the event,” he said, pointing attendees to purchase tickets at newbocitymarket.com/bbqandbrew.

Moore said besides homebrew beer, this year’s BBQ & Brew will feature commercial craft beer, along with up to 20 Iowa barbecue vendors.

Several Midwest craft breweries will be featured, including Kansas City-based Boulevard Brewing Company, which is sponsoring the event and bringing beer from their “beer cave.”

“This type of beer usually never leaves the brewery, but we’re very fortunate to have it at our event,” Moore said, adding that the homebrew competition, with 24 participants likely, is a Beer Judge Certification Program-sanctioned event, which adds “a bit more clout.”

Kent Ball, a member of the Cedar Rapids Beer Nuts, took top judges’ honors last year with his Haeley’s Hefeweizen, a German-style wheat beer, but he equally enjoyed serving samples to the attendees and talking up the craft of brewing.

“The public doesn’t care about style guidelines, they’ll just pick the best-tasting beer,” Ball said, adding that he plans to enter the contest again. “This is a good opportunity to serve the public and have it judged on its own merits. We’re doing it for fun.”

Catching Your Death of Cold: The Strain | A Virus Creates Vampires in Guillermo del Toro’s Exciting Thriller The Strain

Take My Husband ... Please in "Married" | A Woman Orders Her Spouse to Fool Around in Married