Kevin Costner (center) and fellow actors attend the 25th anniversary of the movie Field of Dreams in Dyersville.

Every quarter century or so, moviemakers remember Iowa and decide to film this or that blockbuster in our backyard. Hollywood perennially misunderstands the Midwest and its people, of course, so it’s no big reveal that so many of these tall-corn epics have pulled the old bait and switch—flattering us with their attentions before ultimately caricaturing us all the way to the bank, or the box office. Bridges of Madison County and A Thousand Acres come to mind, unless you think adultery, abuse, dread diseases, poisoning, madness, jealousy, and treachery are quintessentially Iowa traits. Against such a maudlin cinematic backdrop, Field of Dreams, which this year celebrates its 25th anniversary, offers a bright contrast. It’s fair to say the flick gets us right, or at least as near to right as any big-studio film shot in Iowa, about Iowa.

In mid-June, I and 1,000 or so other Hawkeyes set down our folding chairs and picnic blankets smack-dab in centerfield on a corn-knee-high night of moonshine to participate in the 25th anniversary screening staged at the legendary ballpark outside Dyersville. As the full moon rose over the old Don and Becky Lansing farm and the title sequence began to roll, the film’s ultimate rightness struck me in ways it surely hadn’t back in 1989, when I had just entered high school.

I wasn’t alone in my belated appreciation. To kick off the under-the-stars showing, Governor Terry Branstad read a gushingly lengthy State of Iowa proclamation declaring Field of Dreams Day. Kevin Costner was cozier, but no less grandiose, in retrospect, telling us of the film’s enduring resonance:“I don’t think there’s anything more American…I don’t think there is any bigger miracle, for me…than this movie that was made 25 years ago here on this field.” 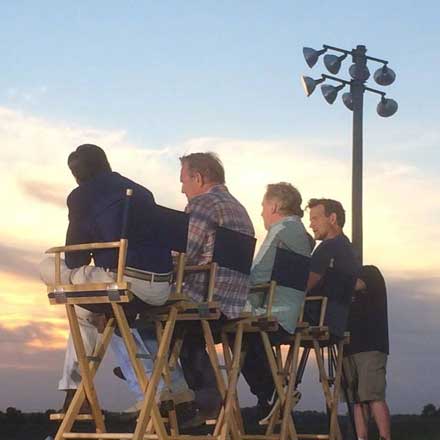 Panelists at the 25th anniversary of the movie Field of Dreams in Dyersville.

In the 25 years since “If you build it he will come” became a cultural mantra not just in the Hawkeye state, but everywhere else dreams are grown, we Iowans who were still greenhorns back in 1989 have grown into our own alongside the iconic flick—the one to which we’ve had to answer however far from home we’ve roamed. Now, hoeing the long row into middle age, I’ve come to a deeper appreciation for what made Field of Dreams ring so true to the Iowa experience when it first graced our movie screens. Here, for me, are five anniversary take-aways:

Granted, Field of Dreams isn’t perfect movie magic—it indulges in too many rural and small-town stereotypes for that (witness the way we’re repped in the PTA, Terence Mann book-banning scene)—but its sins are venial, and it comes as near to getting us right, respectfully, as any blockbuster to reach full leaf and tassel in my lifetime.

So no…it’s not quite heaven, but it’s close. And if you haven’t yet been to the Field of Dreams in person, it’s worth listening to the persistent voice inside your head this July telling you to go the distance.