Rich or not, kids just wanna have fun: #Rich Kids of Beverly Hills.

In the reality series #RichKids of Beverly Hills, the rich kids aren’t icky in that Kardashian way (Sunday, 9 p.m., E!). They’re smart and self-aware, even self-mocking at times. As a result, you don’t laugh at them, but with them. It’s fun to hang out with Dorothy, Morgan, EJ and the gang as they make snarky conversation, take ironic selfies and, in the second-season premiere, plan a fabulous trip to China. Season two also delves into real emotions as Dorothy tries to make sense of her relationship with reluctant boyfriend Cooper.

Meanwhile, the screen fills with social-media-style graphics and sound effects as the friends obsessively text each other, finding the perfect hashtag for every occasion. I’d call #RichKids of Beverly Hills a guilty pleasure, but the series is so fun that I feel no guilt whatsoever. 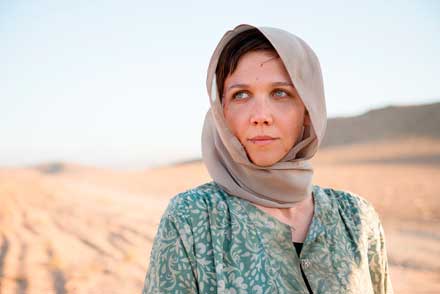 Maggie Gyllenhall in The Honourable Woman.

“We all have secrets. We all tell lies,” coos the narrator in the languid opening sequence of this new miniseries. As if in a dream, we watch a man assassinated by a waiter in a luxurious dining room with his two young children by his side.

Fast forward 29 years. The children have grown up and taken over their father’s business in London: supplying arms to Israel. It’s the kind of work that can get a Jewish zealot killed, but the kids have changed the focus to reconciling Israelis and Palestinians. Nessa (Maggie Gyllenhaal) is the brains of the operation, a smart, driven, articulate woman who has just been appointed to the House of Lords. She has many enemies, though, from Israelis to Palestinians to English protesters. A sense of menace hangs in the air.

Dreaminess and menace are the keynotes of this eight-part spy thriller — an intriguing combination. Director Hugo Blick is an esthete with a taste for fluttering white curtains and mournful violin music, but he also hooks you with potboiler elements like kidnappings and suicides. Most of the characters have secrets, as the narrator suggests, and by the end of the first episode we haven’t quite figured out what they’re hiding.

I can’t wait for The Honourable Woman to reveal more of its own secrets.

In Houdini’s day, magic was on the cutting edge of mind-blowing spectacle, and magicians in puffy-sleeved shirts passed as sex symbols. In the era of Google Glass, driverless cars and other real-life sorcery, magic shows are more of a quaint curio, but I’m still excited that the CW is reviving Masters of Illusion. The magic variety show, now hosted by Dean Cain, will roll out the classics: levitating, walking through walls and vanishing, complete with beautiful assistants and lots of silky fabric. It’s nice to know that, even in a time of digital miracles, there’s still a place for artfully concealed wires and hidden compartments.

Bring on the puffy-sleeved shirts.

This miniseries preys on our paranoia about deadly creatures encroaching on our cities and suburbs. We watch footage of snakes, scorpions, bats and even leopards sneaking ever closer to humans. “Could they be coming for us?” the narrator asks ominously.

Urban Jungle unexpectedly changes tone at the end of the first episode, during footage of a sad little sloth trapped in traffic in Rio de Janeiro. The narrator notes that thousands of species go extinct every year, trying to enlist our sympathy.

I’d be a lot more sympathetic if the series hadn’t scared me silly during the previous 55 minutes. By portraying these critters as out to get us, Urban Jungle makes extinction seem like an attractive option.

ABC rounds up a bunch of contestants from The Bachelor and The Bachelorette and plops them on a beautiful beach in Mexico, where they once again look for true love with photogenic strangers. Expect hookups, breakdowns and lots of explosive fights – in other words, everything we’ve come to expect from this franchise, but with fewer clothes. Here’s the kind of analysis we get from contestants as they pursue their new relationships: “It was so insane, it was so weird, it was so, like, bizarre….”

I’d actually welcome insane, weird or bizarre plot twists, but Bachelor in Paradise is really the same-old same-old. Mind you, I’m not complaining. If even one bikini-clad hottie convinces herself that she’s found a soul mate in a bare-chested beefcake, I’m going to root for their romance. In August, I’ll root for anything that’s not a rerun.

Cafe Paradiso: Come for the Coffee, Stay for the Jive