﻿﻿Jeremy Renner in Kill the Messenger.

After several castings as a superhero action figure, Jeremy Renner (The Hurt Locker, American Hustle) stars in the real life character role of Pulitzer Prize-winning journalist Gary Webb, a reporter for the San Jose Mercury News who risked everything to break a story that ultimately broke him. Kill the Messenger tells the story of Webb’s investigative reporting that resulted in the 1996 controversial series called Dark Alliance, implicating the CIA in the nation’s crack cocaine epidemic of the 1980s, and of using the profits to arm the Nicaragua Contras rebel army. Webb’s unwavering conviction takes him into California courtrooms and prisons, to Washington, DC, and even into Nicaragua. But the same exposé that wins him praise and fame draws a tsunami of criticism for lack of evidence, while a smear campaign by the CIA and L.A. Times destroys his career and ultimately his life.

Kill the Messenger is about a lone reporter for a local daily newspaper who gets way in way over his head. And to this day, the debates still continue about everything from how Webb gathered his information to the question of how “two shots” to Webb’s head could have been ruled a suicide. Webb defended his own investigation in his book Dark Alliance. And the CIA seemed to confirm Webb’s story in a 400-page document that went unnoticed thanks to the Monica Lewinsky scandal. Yet in an October 2014 opinion piece by The Washington Post assistant managing editor for investigations, Jeff Leen describes Kill the Messenger as fiction, insisting that Webb’s investigation did not meet journalistic standards because “an extraordinary claim requires extraordinary proof.” 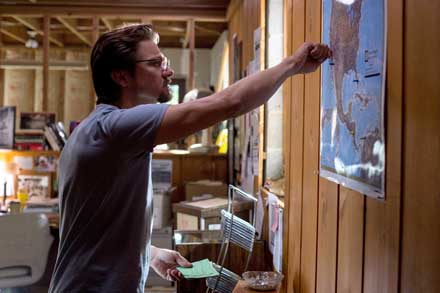 ﻿﻿Jeremy Renner in Kill the Messenger.

Kill the Messenger is an important story that somehow gets dampened in the process of being told. Even with Renner’s reliable delivery,the film feels a little flat. But the bottom line is that this piece of history carries a familiar theme. It’s about the people who know something important they need to tell, even when the risk is great. Woodward and Bernstein, along with Washington Post editor Ben Bradlee, risked everything when they broke the Watergate scandal, but their reporting toppled a Presidential administration. Gary Webb’s efforts take a much more tragic trajectory, the kind we associate with insiders like Jeffrey Wigand (The Insider), who blew the whistle on big tobacco and all but lost his life, and Edward Snowden, who’s been hiding in Russia since exposing the practices of the NSA, and whose story is told in a documentary called Citizen Four. So here is the takeaway, though it sure isn’t pretty: When you risk everything to do what you believe is right, sometimes you lose everything. B