Author and screenwriter Gillian Flynn and director David Fincher steer us through the murky, uncharted tale of the enigmatic couple  Nick (Ben Affleck) and Amy Dunne (Rosamund Pike) in Gone Girl. Nick is celebrating—no, contemplating—his fifth wedding anniversary and how their lives have changed since they married, and especially since they left New York for Nick’s hometown in Missouri. Flashbacks reveal the mutual sense of cool that first drew the couple together, and then they married and lived happily briefly after. It seems their jobs dried up and Nick’s mom got sick, so they surrendered their trendy urban life for the Midwest, where Nick now owns a bar with Margo (Carrie Coon), his sister and confidante.

On their fifth anniversary, Nick enters his house to find shattered glass and blood stains, but no Amy. Then he calls the police and our task as viewers is to wonder: Where is Amy? Who took her? Is Nick involved? And wondering is something we do long and well. Weighing in at 149 minutes, Gone Girl delivers a sustained mystery, all the while tossing us clues that fuel both answers to the question: did Nick do it or didn’t he?

Equally mystifying is Nick himself, whose personality continues to escape us, and who continues to avoid showing us who he really is. Ditto for Amy, another unquantifiable entity, whose disappearance ensures her invisibility.

Director David Fincher delivers everything that he and this fine cast have to offer, especially Affleck, whose acting style can be awkward, but so be it. Here his awkwardness is well placed. 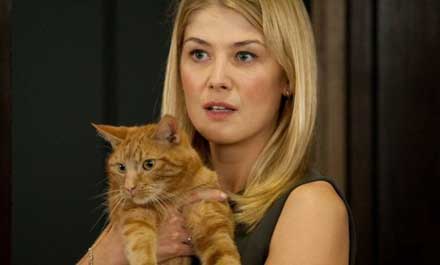 And finally a word about the ending, which left me deeply unsatisfied until several days later when it all sank in, along with the realization that Gillian Flynn was way ahead of us and knew which way to steer this unexpected story that, like me, you will continue to ponder for days.   A