Melinda Fishel and her son Brayden walked their dog Rico at the 2014 Give a Dog a Bone 5K.

Dogs can count, research tells us (though you probably wouldn’t want them to do your taxes). They can also learn an average of 165 words and are hardwired to respond to human emotions—which makes them good at obeying commands and comforting us when we’re upset.

Given their many fine qualities, it’s hard to imagine how anyone could ever abuse or abandon dogs, but when it happens, those animals have a safe harbor in Fairfield-based Noah’s Ark Animal Foundation. If you’d like to support the organization, mark your calendars for June 6, Phys-Emp’s second annual “Give a Dog a Bone” 5K run/walk at Chautauqua Park.

Community members of all ages are invited to lace up their sneakers, leash up their pups, and head down to the park. Those without a “significant canine other” are welcome to come too.

Lending a Paw to Down-on-Their-Luck Dogs

PhysEmp.com, a local company that connects physicians with recruiters, held the race last year for the first time to raise funds for Noah’s Ark. The event generated $1,500 in generous donations from the community—enough for plenty of kibble in the shelter’s friendly, no-kill facility.

“The donations will be put to very good use to purchase food, medication, treats, toys, kennel-cleaning supplies, and cat litter, to name just a few items,” says Dawn Hauck, executive director of the shelter. “We’re grateful to PhysEmp for thinking of the dogs and cats at our shelter.”

This year’s race will build on last year’s event, and hopefully raise even more funds and awareness for the shelter, accoridng to PhysEmp Customer Service Representative Melinda Fishel, who is organizing the event. “The 2015 race is going to be bigger, with more community involvement now that the word has gotten out,” she says. “Noah’s Ark will have adoptable dogs on site this year too, so people can see just how loveable they really are.” 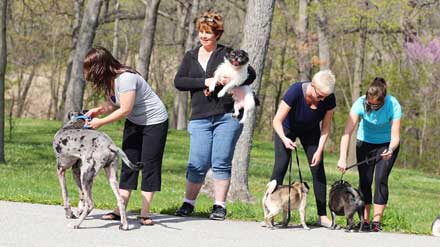 Dogs, friends, and a beautiful spring day—what could be more fun that that?

Some members of the PhysEmp team have experienced this lovability firsthand after adopting dogs rescued by the shelter.

“The community is so lucky to have a place dedicated to the well-being and protection of animals,” says PhysEmp Account Manager Paul Strubell, whose family adopted Blue, an Australian Blue Heeler mix who nearly died in a ditch before being brought to the shelter. With a little love, Blue became an integral part of Paul’s family and traveled with them across the U.S. and several other countries during her healthy, happy decades.

“Shelter cats and dogs wear a chip on their shoulder, but they can grow to embody an optimistic spirit after they get adopted—especially if they knew a life of abuse prior to ending up in a shelter,” Paul says. “When you show them that they deserve better than the way they had previously been treated, they will return that attention tenfold.”

“Maisie is just an absolute ray of sunshine,” she says of the Corgi-Spaniel mix she adopted after volunteering at Noah’s Ark one day. “She is incredibly affectionate, such a little pistol, full of piss and vinegar. She gets me outside every single day, no matter what. She makes me laugh, she imparts her wisdom—oh boy, does she impart her wisdom—and she keeps my heart open.”

If you’re curious about exactly what sort of wisdom a vanilla-butterscotch Corgi might have to impart, you can visit barks atstrangers.com, where Shapter chronicles her adventures with Maisie in essays like “The Omivore’s Nonexistent Dilemma” and “Have Dog, Will Travel.”

In addition to dogs being good blog fodder and excellent company on their own, research shows that man’s best friend can also lead to more human friendships. A study published by the British Psychological Society found that when you go for a walk with a dog, you get about three times more social interactions than when walking solo.

In light of all the positivity that canine companions can bring into our lives, it’s a bit hard to swallow the fact that about 2.4 million healthy, adoptable dogs and cats have to be euthanized in U.S. shelters each year due to lack of space and adopters, according to the U.S. Humane Society. To put it in perspective, that’s about one every 13 seconds.

Often, these animals are the offspring of cherished family pets, which is why Noah’s Ark places such a strong emphasis on spaying and neutering programs.

“We started our annual Big Fix Campaigns over five years ago, and it has been responsible for spaying and neutering hundreds of cats and dogs in Fairfield and the surrounding communities,” says Hauck. “Lowering pet overpopulations means less animal suffering and less expenses for tax payers. It’s a win-win situation.”

Speaking of winning, Fishel says that winners of the “Give a Dog a Bone” race will receive special prizes for making the best time in their category. Everyone who participates in the event will go home with a T-shirt. And you never know—if you find the right fit for your family, you just might go home with a dashing, devoted, four-footed friend as well.

Find A Baby Bird Out of the Nest? No Need to Intervene!

True Story | The Journalist and the Murderer