About six years ago I received a phone call from Greg Reitman, a Hollywood filmmaker who wanted to interview David Lynch and Donovan for a documentary film he was making about world peace. It wasn’t his first. His previous documentary, Fields of Fuel, was a Sundance Audience Choice Award winner. Distributed as FUEL, it tells the story of a Louisianian who was trying to save the planet by encouraging the use of biodiesel over imported oil.

Greg has been making a reputation for himself as Hollywood’s “Green Producer.” He is also the creator and executive producer of the webcast program On The Green Carpet. His current documentary feature, which contains footage from his Fairfield visits, is ROOTED in PEACE. The film asks viewers to look within and seek avenues to promote peace.  Greg will be returning to Fairfield on Sunday, August 2, for the Iowa premiere of ROOTED in PEACE, with a question and answer session afterwards.

During our many phone conversations, Greg tried to explain the kind of film he was making. He was on a serious quest to  create peace in a violent world and to reduce global warming. As a student at UMass Amherst, he came up with the idea of planting trees to save the planet.

Greg was marching for peace, planting trees, yet personally he was suffering from PTSD and didn’t know it. He had been traumatized as a film student in Israel during the Gulf War.

The Beach Boys in Fairfield

What eventually brought Greg to Fairfield was a Beach Boys concert on Labor Day in 2009. Greg’s girlfriend, Britta Peterson, was from Iowa, and they seized the opportunity to come out together for work and play. Greg brought his camera and hired local videographer Brian Smith to film the interviews, including one with Mike Love. 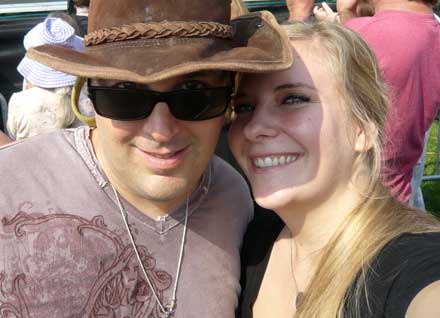 Greg Reitman and Britta Peterson at the Beach Boys concert in Fairfield, Iowa, in September 2009.

Mike later invited Greg to interview him in California, and loaned him historical footage and the song “Pisces Brothers,” which he wrote for George Harrison when they celebrated their birthdays in Rishikesh, India.

Greg also interviewed Fred Travis, director of MUM’s Center for Brain, Consciousness, and Cognition, who showed him how the brain becomes more settled and orderly during TM practice.

After his visit, Greg had more questions. He still wanted to interview David Lynch and Donovan, so he returned for the David Lynch Weekend the following November. Donovan agreed to participate in a tree planting for peace on the MUM campus with students and faculty from the Sustainable Living department. Donovan sang songs and told stories, and gave Greg his interview.

David Lynch had heard about Greg’s  documentary FUEL, which includes interviews with musicians Neil Young and Willie Nelson about their biodiesel vehicles. David met Greg in the Green Room of the Sondheim Theater during a concert featuring Donovan and James McCartney, and agreed to be interviewed for the film.

Greg also learned TM during that weekend. He descried the experience as “the beginning of a new way of life for me. The power was in me the whole time; I just didn’t know how to activate it!”

International film producer Joanna Plafsky, who is on the board of directors of the David Lynch Foundation, says, “Greg’s film beautifully takes us on a transforming journey from fear and stress to an experience of inner peace—the basis for real change in our world. It gives audiences valid solutions to today’s challenges.”

ROOTED in PEACE continues to play at film festivals this summer, and theatrical releases in North America and Europe are being organized for the fall. It will also be available for online streaming and on DVD.

For tickets to the 7:00 p.m. screening on Sunday, August 2, at the Sondheim Center for the Performing Arts, see fairfieldacc.com.

Ken Chawkin is a publicist and poet. You can follow him on Twitter @kenchawkin, and visit his blog at theuncarvedblog.com.