Albums released by Rhiannon Giddens and Pops Staples this year celebrate the contribution of African Americans to traditional roots and blues music. Well known for his blues guitar work, Pops Staples took the microphone and sang with daughter Mavis while recording his final tracks in 1999, but it took 16 years to release the CD Don’t Lose This. Rhiannon Giddens is one of the founding members of the Carolina Chocolate Drops, an old-time Americana band based in Durham, NC. Her album called Tomorrow is My Turn beckons listeners to remember the roots of contemporary American music. Both 2015 albums should fit easily into any Americana playlist for Fringe Toast listeners.

A member of the Grammy-award winning band Carolina Chocolate Drops (CCD), Rhiannon Giddens was born in Greensboro, NC, and majored in opera at Oberlin Conservatory. With CCD, she plays banjo and violin while leading most vocal tracks. Her debut solo album is the 2015 release Tomorrow is My Turn, featuring songs from legends such as Patsy Cline, Odetta, Dolly Parton, and Nina Simone. Producer T Bone Burnett asked to collaborate on this album after hearing Giddens sing in a public performance.

On the Irish folk song “O Love is Teasin’,” Rhiannon’s melancholy violin provides the perfect muse for her plaintive vocals. The song ends with an unexpectedly delightful electric guitar fade. On the 1930 song by Geeshie Wiley called “Last Kind Words,” banjo and guitar frame a minor-key lament. Then the classic “Shake Sugaree” written by Elizabeth Cotton sparkles as a familiar song many will recognize. Some still debate the meaning of the title, while the lyrics tell tale of a person giving up all possessions.

Finally, Giddens brings a new interpretation to Nina Simone’s “Black is the Color (of My True Love’s Hair)” by offering an upbeat jazzy version of a song traditionally sung downtempo, as Nina did. Burnett’s stamp can be clearly appreciated on this track through the weaving of percussion, piano, and harmonica behind Giddens’s confident vocals. This album begins to etch her place in music history.

Roebuck “Pops” Staples recorded Don’t Lose This in 1999, the year before his passing. It has taken 16 years to release this exquisite collection of songs, which include religiously inspired and blues songs from his early solo years and with the Staples Singers. The original recordings were co-produced by Pops and Mavis Staples. Final touches and production were added by Mavis Staples and Wilco’s Jeff Tweedy, whose son Spencer also plays drums. Towards the end of his life, Pops told daughter Mavis, “Don’t lose this!” And so here it is. 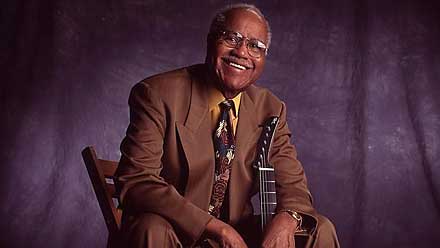 Pops is generally recognized for his pivotal contribution to gospel music of the ’60s and ’70s era as a guitarist, singer, and patriarch of the Staples Singers. He was born in 1914 on a cotton plantation in Winona, Mississippi, into a family of 14 children. As a young man he played with local musicians that included Robert Johnson and Son House. He moved to Chicago in 1935, where he worked in steel mills and construction. In 1948 he and his wife formed the Staple Singers.

Don’t Lose This is a straightforward, swampy, electric blues- and gospel-inspired feast featuring a combination of live tracks and studio recordings. Tweedy has delicately added modern elements while preserving the simple soulful elegance of the man and his family. In a review published on pitchfork.com, Evan Minsler writes that Pops “sang about darkness, and he sang about light. . . . it’s a total gift to hear one of the greats completely owning his lane.”

The best live tracks include “Better Home” and Bob Dylan’s “Gotta Serve Somebody,” which have never sounded better. On Blind Willy Johnson’s “Nobody’s Fault But Mine” and also the downtrodden “Somebody Was Watching,” Pops’s distinctive guitar tremolos and baritone voice place us firmly in Mississippi swampland, a wonderfully unique American signature.

By the time you sample these two outstanding 2015 CD releases, you will understand both the historic significance of Pops Staples and the forward-looking elegance of Rhiannon Giddens, who is certain to make her own mark on American music history.