Laos is the Paraguay of Southeast Asia. It’s terribly poor with awful roads, and the public transportation system tests the mettle of anyone brave or foolish enough to use it. The bus we rode on from Vientiene to Luang Prabang was proudly marked VIP in letters three feet tall, but the air-conditioning was no match for the temperature outside and it had no bathroom. Most of our time we could not ride buses but rather found ourselves crammed into 12-passenger minivans, and these had no air conditioning at all.

Mostly mountainous, Laos is thickly forested (at least for the time being), which made the lack of birds all the more puzzling. In my week in Northern Laos, I never heard a bird call or sing. There simply weren’t any, for they had all been eaten long ago. In order to add poultry to their diet, they now raise plenty of chickens and ducks. I saw a man happily herding about 20 ducklings down the highway, laughing while traffic stacked up behind him. As in most of the countries I visit, roosters began crowing before dawn, but there were no bird songs, calls, or tweets. I suppose they keep ducks because of the rice paddies. 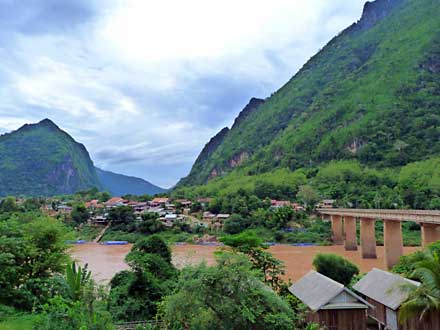 The mountains of Laos are profusely forested.

The people I met in the countryside seemed happy and relaxed. Lots of young mothers with babies. Intact, large families, eating meals together with both men and women taking turns holding the baby. Like Northern Thailand, Laos is home to any number of ethnic groups, what we call “hilltribes” in Thailand, living in impoverished villages in houses that looked like chicken coops, but they seemed pretty happy, too. Children would wave and laugh as we drove by on our rented motor scooter.

In such a tranquil setting, it seems hard to imagine that Laos is the most heavily bombed place on earth. We dropped more explosives on Laos than were dropped by the Allies in all of the Second World War. For eight years we spent about eight billion dollars in dropping explosives onto what we called the “Ho Chi Minh trail.”  We were not at war with Laos (for that matter, we weren’t officially at war with Vietnam either) but nevertheless we bombed them daily. Even when truces caused us to pause our bombing of Vietnam, we continued bombing Laos. As we drove through one area, I noticed that each farmhouse had a fish pond nearby. The little ponds were scattered about randomly. I imagined hard-working farmers digging these ponds until I realized they were bomb craters!

There is still a lot of unexploded ordinance around, especially cluster bombs, which resulted in shiny little balls that Laotian children have been warned not to play with. There are even a few 500-pound bombs lying in the mud, waiting to detonate when a farmer plows his field or walks through the woods. The mechanics of explosives resist corrosion. Heck, there is unexploded ordinance from the First World War still giving French farmers trouble in fields near Verdun.

When our campaign of fiery persuasion finally ended, Laos became a communist state about the same time Vietnam did, in 1975. Vietnam has since prospered, but I’m afraid Laos has not been as lucky.  Vietnam has the ocean, but Laos is land-locked and extremely mountainous. The Chinese are encouraging the Laotians to cut down their forests so they can practice monoculture, and to dam their rivers so they can build hydro-electric dams and sell the energy to China, but I’m hoping these measures will meet some resistance.

Out of my eight days in the country, I think we spent 22 hours in travel. I seem to have a knack of picking the worst itinerary possible when planning my trips. I look at a map and think, “Well, it only looks like 60 miles. Can’t take more than a couple of hours.” Then I find that it takes half a day to go that distance, and inside a hot, crowded mini-van, that half-day is spent lurching from side to side down roads so irregular they defy description.

One such morning our companions were two girls, aged about 14 and 11, who were headed back to their hometown because their 35-year-old mother had just died. After a preliminary and obligatory display of sadness, the sisters entertained all of us by shrieking with laughter each time the van bottomed out on an especially deep pothole.

It’s a wonderful thing when people can hold onto joy despite their problems. And it was a joyous moment the afternoon we crossed the border back to Thailand, where buses were air-conditioned, the roads paved, and my ATM card started working again. The next morning at our hotel in Chiang Rai, I heard birds in the tree outside our window welcome the dawn.