Members of the Emerald Knights Alumni Corps rehearse for the Tournament of Drums.

Roy Gongwer was just 10 years old when he became a charter member of a Cedar Rapids musical tradition.

The formative event happened July 12, 1965, at Robbins Lake Park in Cedar Rapids. Gongwer vividly recalls, “We had a potluck meal, and the parents held their meeting while us youngsters played. When the meeting was over, [corps director] Bill Matus called us 28 boys to form a line on the south side of the pavilion. He called us to attention and said, ‘So this is where we start with these boys: The Emerald Knights Drum & Bugle Corps.’ ”

Fast forward 50 years. Gongwer, now living in central Iowa, is joining together with some of the friends he and others have made in the past half-century as the Emerald Knights celebrate the corps’s 50th anniversary. 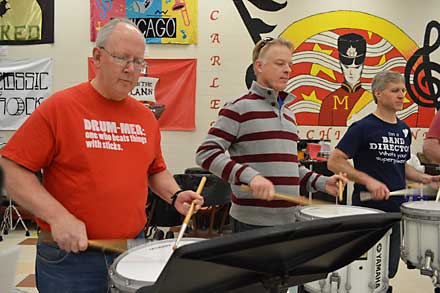 Roy Gongwer (left) became a charter member of Emerald Knights back in 1965.

As part of the celebration, alumni from Emerald Knights, as well as the corps under its other names (including Nite Express), are rehearsing for a single show.

The Tournament of Drums, a long-standing tradition in Cedar Rapids, returns to Kingston Stadium after an absence of nearly a decade. The Alumni Corps, consisting of horn players, color guard, and drummers like Gongwer, will perform at the pre-show on July 27, in which six other corps from across the country and Canada will compete. 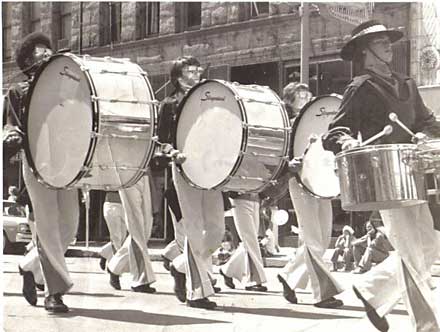 Members in drum and bugle corps are generally ages 12 to 21 and spend the summer perfecting their shows in competitions throughout the United States and beyond. Corps competing on July 27 will include the Vanguard Cadets of Santa Clara, California; Les Stentors of Sherbrooke, Quebec, Canada; Genesis of Austin, Texas; Coastal Surge of Myrtle Beach, South Carolina; River City Rhythm of Anoka, Minnesota; and the Colt Cadets of Dubuque. 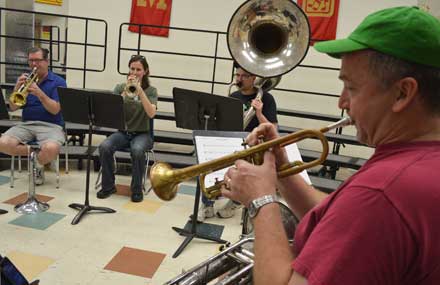 The horn section of the Emerald Knights Alumni Corps rehearses for the Tournament of Drums.

The Alumni Corps, which has been rehearsing together since April, will perform in exhibition. Former members in their 20s to those in their 60s will feature music that the Emerald Knights and Nite Express played in years past. Gongwer and trumpet player Lloyd Paulsen of Cedar Rapids are two of the charter members who plan to perform.

Nancy Andreasen of Cedar Rapids, a former color guard member of the Emerald Knights, is especially excited about the Tournament of Drums. Her daughter, Katie Andreasen, is closely following in her mother’s footsteps. Katie, 15, joined the Colt Cadets this year as a member of the Dubuque corps’s color guard, and both she and her mother will perform at the show. 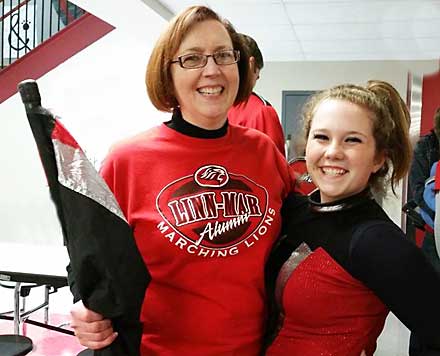 Mother and daughter Nancy and Katie Andreasen will both perform at the Tournament of Drums.

“It’s really serendipitous that Katie was able to march this year when we brought a corps show back to Cedar Rapids,” Andreasen said.

Over the years, other corps were started in Cedar Rapids, including the Musketeers, the all-girl Cavaliers (later renamed the Cedar Rapids Moose Girls, with sponsorship by Moose Lodge No. 304), the Cadets, and the Grenadiers. 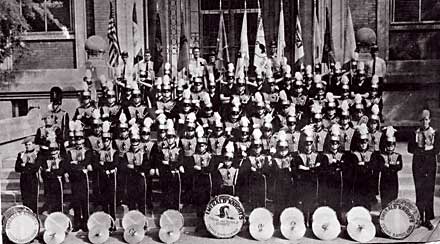 Former members of all of the corps are invited to Alumni Corps rehearsals. The final practices will be July 25 and 26, the weekend before the Tournament of Drums.

“While the Emerald Knights have been inactive since 2002, we still have a long history to celebrate,” said Jenifer Vick, chairwoman of the Tournament of Drums.

“Even alumni who can’t perform will have a chance to socialize and catch up with their drum corps friends at reunion events, and of course, anyone who enjoys watching musical performances is invited to the show at Kingston Stadium.”

Tickets to Tournament of Drums, on Monday, July 27, 2015, at Kingston Stadium in Cedar Rapids, are $12 in advance and $14 at the gate. The Alumni Corps will be the pre-show entertainment at 6:30 p.m. Find more details at emeraldknightsreunion.com.

Laughter Amid Hardship: Laotians are Poor, But They Still Find Joy in Life

The Gods of Randomness