Winter. Such a beautiful, horrible time of year. Here in Southeast Iowa we may not have it as bad as, say, parts of Canada. Or the North Pole. But there aren’t very many of us who, come January, aren’t ready. To. Be. Done. Speaking for myself, my already-pale skin starts to develop a bluish-green tinge, my eyes glaze over, and my brain turns to mush from too many episodes of (insert BBC show here). If we are getting really honest, I’ve also been prone to slipping into the cracks of depression from time to time. Most of those times are when I’m trying to date someone. All of the other times are in the winter. Ugh. Winter.

How do we get through it?

The holidays certainly help. Be it Solstice, Chanukah, Christmas, Kwanzaa, or Festivus, preparing for a holiday (and gleaning as much gratitude, joy, and entertainment out of it as possible) helps us forget that our hydrangea shrubs are uglier than sin and that we haven’t felt our toes for several days.

Yep. I like me some Christmas. Even though my family upbringing wasn’t very religious, it was very musical, and there are a couple Christmas carols that, when sung aloud, tap into something sacred inside and get me all teary-eyed. I’m also a total sucker for twinkling lights and wrapping paper, and have recently discovered that the smell of balsam fir brings me to ecstatic delirium. When my time comes, I hope they bury me in a pile of balsam.

Nothing says Christmas to me like some good old-fashioned mushroom cookies. Now, before you jump to conclusions, rest assured there are no hallucinogens or fungi in these holiday treats. They are Lithuanian spice cookies that the neighbor lady (thank you, Betsy Schafer!) gave to my mom in 1979, which we have made every December since. And they happen to be shaped like fat, little mushrooms. If ever a cookie was adorable, this is it. Now, imagine a soft, doughy explosion of ginger, clove, citrus, and poppy seed in your mouth. Something about those ingredients is like crack to me. 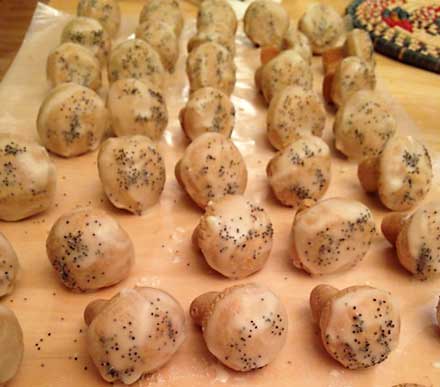 I will say, however, that five-eighths of the fun is in the making of them. It’s an elaborate, precise, and sometimes hilarious process that requires several hands, several hours, and a good soundtrack. (I recommend Vince Geraldi’s A Charlie Brown Christmas. This album is so good it’s even tolerated by Abram Siemsen, who gets downright nauseous around Bing Crosby or Nat King Cole Xmas classics.) Back to the ’shrooms. I’ve made these crowd-pleasing cookies with family, and I’ve made them with friends. It’s always a wintry Sunday afternoon well spent.

Christmas aside, there are a few other inherently seasonal happenings that make me giddy. There is an excitement in my heart when a fresh snow falls (I hope I will always have a friend who will do donuts in the junior high parking lot with me), and I am blessed with a mother who can knit a mean pair of wool stockings. Every chilly day that I get to put on a pair of those socks is a good day.

What simple delights and rich traditions will buoy you up this season?

I bumped into Yvonne Koopmans walking her dogs on the Fairfield square the other day, and I asked her about her wintertime traditions. She was inspired to share with me a few memories from her winters in Roermond, Holland. “I had a friend, Marcel, who I’d see once a month. We were reading the same books, so he would come over and we would have a big feast of food and talk endlessly—exchanging ideas of how we were experiencing the books we were reading. That combination with putting log after log on the fire. . .”

Her eyes have a faraway look. “My father had a garden, and once he had to cut down the cherry tree. That wood on the fire would last the longest and smelled very nice. Made it more special.” She smiles. “Yes, the fireplace is central in my experience of winter.”

Apparently, Fairfield troubadour Tom Morgan is on the same wavelength. When I inquired about his favorite cold-weather tradition, he said, “Romantic scenes on a bear rug in front of the fireplace . . . with hot toddies.” I’m not sure what I expected to hear, but that was not it. “Is that really a tradition for you?” I asked. “No. But I would like it to be.”

Ho, ho, ho, all kidding aside, Tom is a big fan of the winter walk. He’s done some serious trekking in the Himalayas, so comparing the Fairfield Loop Trail seems a little unfair, but he does have a favorite section of the trail through Lamson Woods, which is most beautiful in the snow.

Tom, who plays old-time country blues and ragtime on guitar, adds, “Playing music is a particularly cozy thing to do in the winter. . . . I find it’s a good time to work on new music.” If you are lucky enough to have him at your holiday gathering, you can bet that he’ll bust out his ol’ six-string. “It all comes down to music and food and friends.”

But don’t forget about family. I work part-time at the At Home store on the Fairfield Square, and I meet interesting family folk there every week. One of our regulars—a mother (and grandmother) who thrives on creating festive experiences for her kin—recently came into the store. Her son has married into a British family, and she is all about adopting a few new traditions from that culture. She was thrilled to find a new pudding bowl from the U.K., and mentioned she was also on a quest to create the perfect Christmas “cracker.”

Don’t be fooled—the brits call their crunchy conduits for cheese “biscuits,” but Ye Olde English Christmas cracker is something else entirely. She explained: “We are saving up our empty toilet paper tubes to fill with candies, coins, and jokes—the joke is very important. I’m going to order the little snaps you put inside that make them go “crack!” when you pull them open and everything flies out. My grandsons will just love them.” Such fun!

Peter’s Christmas tree, in particular, was like none that I’ve known. Get this: His mother always chose not to buy a “cut” tree, but to bring home a living tree in a pot, which was then decorated with (real) candles, sparklers, glass ornaments, and “Szaloncukor” candies. When the weather began to warm, the tree would be planted outdoors. (What a revelation!) The benefits of having a living Christmas tree, of course, being: no tears shed over killing a perfect specimen of nature; no unsightly dry needles shed on your carpet; and vital, green branches that will not burst into flame when the candles and sparklers are lit for five precious minutes on Christmas Eve. “Believe me,” Peter said, “special care was taken to make sure the tree was not placed too near the curtains.” 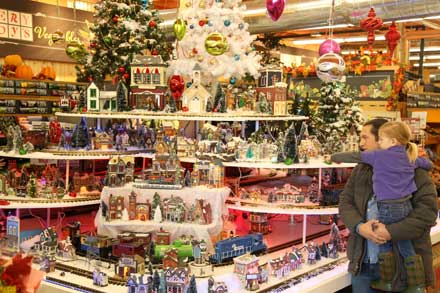 Peter Hodak and his son Yadu take in the massive train display at Everybody’s Whole Foods in Fairfield. The ever-growing display appears shortly before Thanksgiving each year and stays up for visitors to enjoy through the end of December.

I asked Yadu, who was looking, wide-eyed, at various pictures of colorfully wrapped Szaloncukar candies on Peter’s smartphone, “What do you like most about Christmas?” This kid, who I’d rarely heard put two words together, said with a faint Hungarian accent, but with total clarity, “Remember all the trains they put at Everybody’s!?” Ahhh, yes, there is a very fine annual display at our local whole foods grocery. Trains, tunnels, winter villages galore. It’s pretty magical.

Later that morning I asked local card shark Greg Gasaway, over a cup of his phenomenal chai tea, what he likes to do in the winter.

“Leave town!” He may have laughed, but he wasn’t kidding. “You need to break it up, especially if you’re my age. The holidays are nice, but then comes January. If you leave town for three weeks—India or Europe do nicely—you can actually enjoy the good parts of winter here.”

“Getting out the snow plow!” Boys and their toys. Greg also informed me that “anytime after November 1st, but not a day sooner, you can start making Vanillekipferl!” He showed me a picture of the sugar-dusted, horse-shoe-shaped German pastry. “It looks like winter and it smells like Christmas.”

“Yes, well, have you actually made them?” I asked. “Of course,” he said. Coming from a dude who has his own outdoor wood-fired pizza oven, this should not be a big shocker.

Greg’s chai-sipping friend, Frank Wintroub, chimed in. “Going to see the Southeast Iowa Chamber Singers is a must. . . . And whenever the ice is suitable on Bonnifield Lake, I get out my skates.” Frank and his wife also love having friends over to watch movies and make soups. Frank says, “For me, winter is really about the richness of the relationships I have with people I’ve known for years.”

Make Your Own Fun!

Of all my friends this lifetime, my old Chicago pal, Scott Borchert, is one of my favorites. Apart from being easy on the eyes, Scott has an absolute gift for turning an ordinary day into an excuse to celebrate. And when it comes to winter events and holidays, he knocks it out of the park. From chili cook-offs to ugly sweater parties to a traditional Irish breakfast on St. Pats, he knows how to bring people together and create music-filled, laughter-filled, belly-filled fun. He’s a man who makes his own traditions, ones that become beloved by all who know him.

Scott lives in Astoria, NY, now, but even from afar he inspires me to hold onto the few traditions I have, and keep creating new ones. If they can be shared with other people, even better. (Snowshoes, anyone?)

Winter can be challenging, but it comes with its own opportunity. We can choose to cherish what little daylight we have; find ways to appreciate the cold—and the golds, blues, and browns of Mother Nature at rest; and on the days when we’re stuck inside, we can embrace our own creativity and the company of the others.

Let’s make a pact. Let’s put on a pair of wool socks and enjoy the heck out of this winter.

DEAR READERS: For events scheduled to take place in person,…