“As long as you can still grab a breath, you fight. You breathe … keep breathing.” These words, spoken by fur trapper Hugh Glass (Leonardo DiCaprio), teach his Pawnee son (Forest Goodluck) how to be a survivor. And they explain how after being mauled by a bear and left for dead, Hugh Glass endured. Inspired by the real-life American trapper whose tales were captured in the 2002 novel by Michael Punke, The Revenant tells the hair-raising adventures of a fur-trading expedition in the early 1800s, a life on the move filled with hardship and danger. It takes us to the unspoiled wilderness of the New World with its unforgiving conditions, deceitful teammates, and routine attacks by French trappers and Indian tribes.

If this topic makes you glaze over, don’t be misled. This spectacular film drops us into some of North America’s most mesmerizing land- and waterscapes and delivers a raw, potent story that twists and grips and follows you home.

One of Hollywood’s most ambitious films of the decade, The Revenant contrasts the struggles for daily survival against the serene visual expanses. Pristine scenery of snowy vistas, blue-gray mountains, cascading rivers, and windblown forests all gets captured in its natural light as the omnipresent character of Nature, under the direction of Alejandro G. Inarritu.

In addition to his keen eye, Inarritu is a musician and a maestro of sound. He fills each setting with zen stillness where the sounds of wind, water, and human breath are magnified for an intimate effect that captures the solitude and isolation of a trapper’s life. 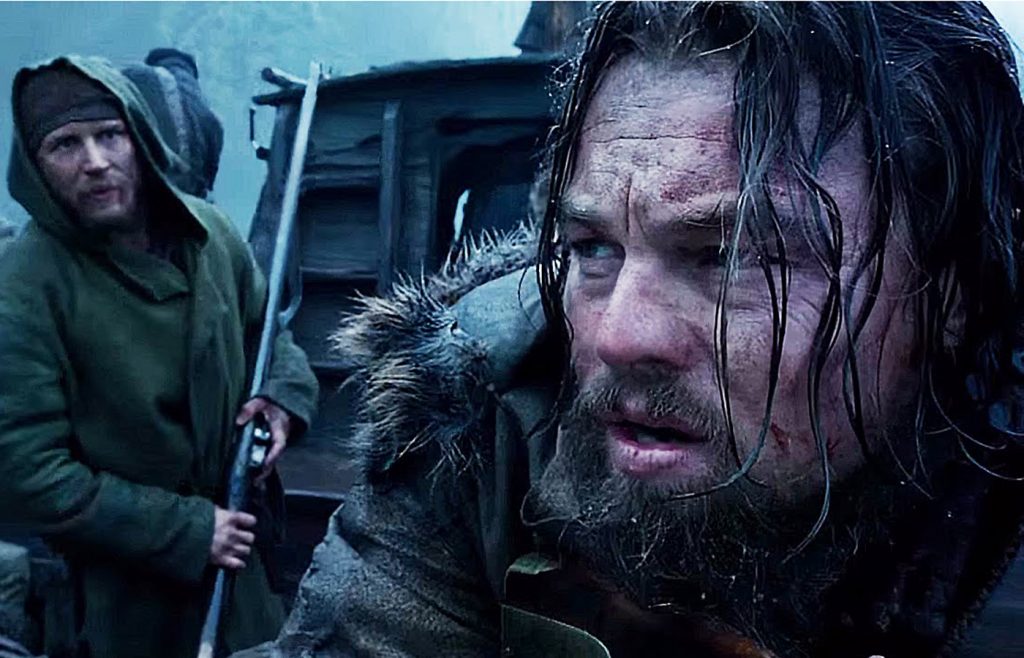 Leonardo DiCaprio in The Revenant

Like the film’s characters, the persevering film crew and skilled cast members—led masterfully by DiCaprio and Tom Hardy—are no strangers to hardship. In addition to long daily commutes to filming locations across Canada, the U.S., Mexico, and Argentina, they weathered frigid temperatures, floods, snowstorms (or lack of snow), and hypothermic scenes in icy waters. DiCaprio spent several hours per day in makeup adding a body layer ridden with bleeding wounds. And he wore a bearskin weighing over 100 pounds.

“Suffering is temporary but a movie is forever,” says Inarritu, who was anointed by Rolling Stone magazine as “Hollywood’s King of Pain.” The director, whose Oscar nomination comes on the heels of his 2015 win for Birdman, admits to taking some big chances while pushing his team to the limits of endurance. He filmed almost entirely outdoors with a shooting schedule limited to as little as 90 minutes per day to capture the fleeting winter daylight without tainting the scenes with artificial illumination. Ultimately, the director’s creative vision stretched production to eleven months, along with the budget. The film, he says, “is a happy accident of a very bad decision.”

While members of the cast and crew may consider this project their most grueling, at least it’s a worthy cause. Winning three Golden Globes and a whopping 12 nominations for the pending Academy Awards, The Revenant will be one of the more celebrated feature films for its artistry and storytelling power. The Revenant is the film of 2015 that lingers and is worth a second viewing.   A