Lisa Santiago discovered on a vacation that dancing was a good way to lose weight.

Have you noticed that every once in a while you come across one of those people that you just want to be around? Because despite the ups and downs in life, what they manage to exude—quite naturally—is joy? Meet Lisa Santiago. By day, she teaches online art and psychology classes. By night, she’s fabulous.

One of Lisa’s many passions is dancing—and sharing her joy of movement with others. She teaches a low-impact dance fitness class in West Burlington “to help women feel great and stay fit.” The quote she posted on her Facebook page sums it up pretty well: “Life may not be the party we hoped for, but while we’re here we should dance.”

Santiago’s background in jazz, Afro-jazz, ballet, Latin dance, and gymnastics  have given her the technical vocabulary to be an awesome Zumba dance fitness instructor, but what qualifies her the most is her ability to get people moving . . . and keep them in the game. Her enthusiasm for having fun while getting fit is simply contagious.

Don’t be scared by the word Zumba. In fact, Lisa avoids using that word for the most part because it has connotations that freak people out. “This is low impact! I keep it safe and protect our knees. We don’t jump around . . . we dance.” Also, if the word “dance” intimidates you, rest assured. “No dance skills needed.”

When I spoke with Lisa a month ago and she was describing her dance fitness class at West Burlington Christian Church, I couldn’t quite put my finger on what kind of class it actually was. So it’s Zumba . . . but not really Zumba. It’s low-impact dancing. With a seven-minute chair routine. In a church. I decided there was only one way to find out if this class was just a cluster of octogenarians sitting in chairs moving their arms and legs around to music. Believe me, it wasn’t.

In fact, the seven-minute “chair routine” kicked my [abs]! About two minutes in, I started to feel the burn and tried to casually look around to see if anyone else was, well, dying. The ladies around me, including 61-year-old Linda and 57-year-old Barb were gracefully getting the job done—full movements, not cutting corners, with smiles on their faces. I decided that, even though I was still in my forties, I’d give myself a tiny break. They were both regulars. They had been doing this a while. Lisa had made it clear—I could modify anything that I needed in order to make it safe and comfortable. I decided to go for it and enjoy the burn.

Apparently I was not the only one who was initially skeptical about the chair routine. About a year ago, a mother and her teenage daughter showed up at class. When they entered the room and saw the chairs, they thought to themselves, “Ohh, this is going to be soooo easy.” Reportedly, they changed their minds pretty darn quick. Truth be told, it was the teenager who had to make repeated trips to the water fountain. 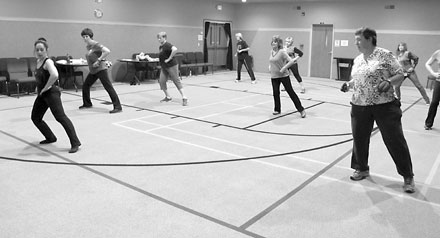 Chair routine aside, for the majority of the class we were up on our feet, stepping, moving, and definitely dancing to songs that Lisa had carefully choreographed to incorporate lower body, core, and upper body muscles in a way that didn’t feel like a chore or a bore. Yeah. We were shakin’ our booties.

Lisa’s easy-going teaching style was a welcome breath of fresh air. Being a newbie, she walked me through the basic sequence of movements before each song, so that when it was time to hit the play button I had some idea of what I was doing. And enough repetition was used throughout the songs that if I screwed up my arm movements during the first and second choruses, by the end of the number I had it down, baby.

“She makes it a point to show the steps,” said Barb Blow, a four-year participant who has become good friends with Lisa over the years. “I’ve gone to other Zumbas. They basically put on the music and it’s like Simon says, you know?”

It’s important to Lisa that no one is left behind. “I took a tap dancing class once, and I felt completely lost,” she said. “I walked out with my self-esteem in shreds every time. I’ve never forgotten that feeling, and I work hard to make sure that everyone feels secure and happy when I teach [my] classes. I make sure everyone has fun.”

Fun indeed! With Puerto Rican roots, Lisa uses a lot of Latin dance steps in her workout (salsa, cha-cha, etc.), but she’s good about breaking the steps down into their basic components. At one point she said, “To start this song out, we’ll Merengue to the right.” She clarified while showing us, “It’s just a step . . . and drag, step and drag, step and drag.” Look, Ma, I’m doing Merengue!

Clearly, once you join the fold, you tend to stick around. A few of the ladies I met at the church that night, Sallie, Nancy, and Barb, had been coming to Lisa’s classes for years. Years!? If that’s not a testament, I don’t know what is!

It’s not just the fun and shared laughter that brings a lot of repeat participants through the church door. People see results.

Barb has noticed huge improvements in her flexibility. She said, “I couldn’t even touch the floor—or put socks on or anything. And now it’s like . . . ” She doesn’t finish the sentence; she demonstrates instead by effortlessly bending at the waist and putting her palms flat on the floor.

Linda Hicks, who started driving over regularly from Middleton a few months ago, has also experienced some major benefits. “I’ve had lower back problems, so I was pretty ginger about some of the moves at first. I had trouble just touching the back of the chair.” She twists her body to demonstrate. “Now I can do it and I don’t even think about it.”

Other participants mentioned how they often feel totally zapped by the end of the day, but that the class seems to give them a second wind. I overheard someone say, “It’s so nice because it’s not like a big part of your evening. It’s just enough to get you out of the house, get you moving, and helps you get through the rest of the evening. It feels good to move parts that you don’t normally move. I look forward to coming next Tuesday.”

Lisa herself says the class keeps her going. “Some days I feel so drained . . . but by the time we’re done, I can do anything!”

Lisa is a firm believer in the merits of dancing. Self-admittedly, she loves food and hates diets. She recalls the day she realized how effective dancing could be to burn off calories. Years ago, her entire family had taken a vacation to visit her grandma in Puerto Rico. “The food was fantastic and I ate non-stop. But I was going salsa dancing with my uncles every night. Guess what? When I returned home a week later, even though I had eaten more food than I could remember, I was seven pounds lighter!”

During her grandmother Bessie’s final years, Lisa became her caregiver and continued to discover more and more about the benefits of dance. “My grandmother loved to dance, and I could see that influence in her body. There were times when she would trip . . . but she seemed to fall in slow motion and land in the most safe manner possible. She never broke a single bone. I attribute that to the automatic sense of balance that kicked in as she fell.”

Lisa has now started introducing new ways to improve balance in her classes. The evening I attended, she dedicated a portion of one song to moving “free form” while standing on one leg—and then the other—for long periods of time. It was surprisingly enjoyable. (Put on your favorite tune and try it some time. Great for improving balance—as well as your gluteus maximus!)

Lisa has also started taking her class on the road. In March she gave a presentation at a conference in Sioux City for college instructors who teach online, and “they just had a blast!” She focused on ways to keep the body engaged when sitting in a chair. “You sit all day, and you want to work out, but you don’t have time? Slide forward in your chair . . . it forces you to use your core muscles instead of just relaxing. If you want to add another element of exercise, put something between your knees and don’t let it fall. Try that even for three minutes and you’re gonna be like, ‘Okaaaaaay, I got a workout!’”

Participants at the conference practically begged her for videos they could watch online, so she’s working on creating her own YouTube channel with exercises set to music that people can use when they need a three-minute break at their desks. She also recently started planning a series of fitness videos (in her grandmother’s honor) for people who use walkers. You can bet money there will still be dancing involved.

It’s a workout that doesn’t feel like work. It’s more like a party, and you’re all invited!

Neighborhood Forest: Get a Tree and Watch It Grow!