Cece picks up points for her team after breaking through a line of skaters. (Photo by Danforth Johnson)

If you’re a parent, you know that kids are wildly impressionable, excitable, and full to the brim with all the possibilities that life has to offer. A child can be captivated by an experience and decide on the spot, “That’s it for me, I’m going to become, do, be that when I grow up!” For the parents, it can be both fantastic and exhausting, because kids look to their mom and dad to help them achieve these dreams, some of which may be more practical than others.

Veronica and Brian Ferreira have had many such experiences with their four children, but the wildest one yet came when their youngest daughter Cece became enamored with roller derby.

It all began in 2009 when the family went to the Rocket City Rumble for the Dixie Derby Girls in Huntsville, Alabama. Six-year-old Cece became obsessed with all things derby on that day, and began a campaign that would change the lives of everyone in her family. “I looked up to these people who were on skates,” she says. “They were all super tall and looked really cool and they all just seemed really brave, and I wanted to be like them. And so I decided that I wanted to be a derby girl.”

This was not a passing craze for Cece. In fact, it persisted for five years. “For the next few years,” she recalls, “I dressed up as a derby girl for Halloween because I wanted to be a derby girl so bad.” The family attended many more adult league games, and the more Cece saw, the more she knew she simply couldn’t wait to turn 18 to be a derby girl. She wanted, no, needed to play junior roller derby.

Like all parents, Veronica and Brian want to support their kids’ dreams, but this idea seemed out of the question, since the closest junior league was 90 minutes away. “We looked around, we thought about taking her to the Quad Cities,” Veronica says, “and that was just too much of a drive for us.” Next they checked into the possibility of a junior division of the Old Capitol City Roller Girls, the Iowa City adult team. “They just said, we don’t have the time and the resources—why don’t you start one?”

The Ferreiras had a good laugh over that one. After all, Brian works full time, Veronica is a full-time grad student, and they have four kids! How could they possibly make the time to organize and run an entire junior roller derby league? But Cece was not to be deflected by mere practicalities, and finally her parents relented. 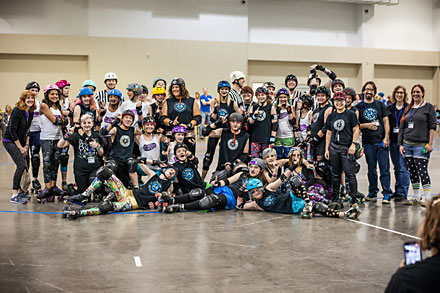 So on June 2, 2014, Cece’s fondest wish was realized as she participated in her very first junior roller derby practice with her brand new derby name, Rainbow Assassin. Brian and Veronica, now Beezer and Madame Paperwork, supposed that a couple of kids would show up, maybe enough for a team. “She’ll get it out of her system over the summer,” they assured each other. But once the league got started, it became a magnet for kids like Cece—kids who were longing to have a place to be brave, fast, and self-defined.

“They just feel that they don’t fit in well in traditional school settings, or they’re victims of bullying,” Veronica recalls. “Among our league, especially among the kids over 12, over 60 percent identify on the LGBT spectrum somewhere. A major part of what adult and junior roller derby advertises is that we are all inclusive and you don’t need to have any prior athletic experience or knowledge of the game. I think that brings in people who are looking for a place to fit in, and people who aren’t used to having safe places.” 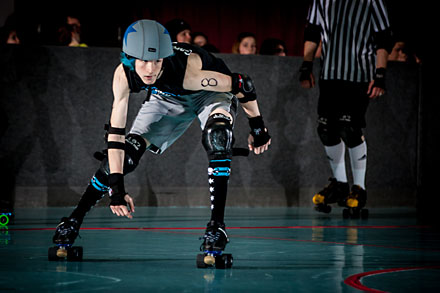 Many of the kids themselves were painfully aware of their outsider status, and Cece’s teenaged brother was among them. Garden Gnome, as he is known in the derby world, remembers how difficult things were before he became a Bruiser.  “Before I joined the team I was very socially inadequate,” he says. “When I joined, I gained a bunch of friends that actually accepted me for who I was, and that’s one of the best things that ever happened to me.” 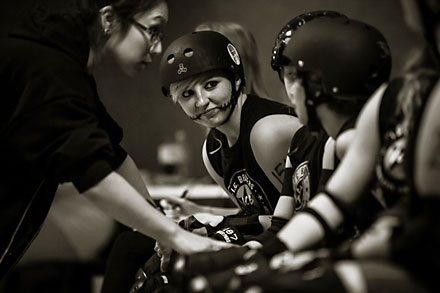 Collide A Scope talks strategy with teammates on the bench.. (Phto by Danforth Johnson)

Collide A Scope, another high schooler, can relate. “I have a history of depression, cutting, and anorexia, so I had spent time in the hospital for it—suicidal,” she says. “Then I joined derby and I had this family that was going to love me unconditionally, and it gave me a reason to keep fighting. I started going to therapy, and now whenever I get hit by a wave of depression, it’s much easier to handle because I know I have that support system. As long as you can cooperate with your team, you belong.” 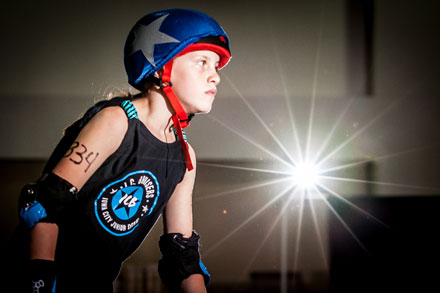 Even Coach Beezer realizes that he’s getting as much out of coaching as the kids are from finally being part of an inclusive group. “With me being in the service, I had PTSD and I didn’t have anything to concentrate my efforts on,” he says. “I needed and wanted to do something good, and coaching makes me feel great. To see the smiles on the faces, the hugs that you get, people just happy to see you—and I’m so happy to see them. It makes me feel like my family keeps growing.”

In addition to feeling like they finally belong in a group, many of the kids are feeling, for the first time, that they belong in their own bodies. They are trimmer and fitter than ever before due to the warm-up laps, stretches, and rigorous skating at the twice weekly, three-hour practices.

“I’ve become healthier than I was before,” Cece says. “Most of the weight we all have now is just muscle. Some teams don’t do all the exercise we do, which is really good for your stamina.  When we compete, we don’t get tired right away. We played a team where at the end of the game we were ready to skate another bout, but they looked like they were dying!”

Although fitness is heavily emphasized among the Bruisers, appearance is not, and that has helped many team members with a negative body image to embrace their own build. Collide A Scope explains, “I wasn’t all that confident with my own body. And now I realize I’m not a stick, but that’s okay, because my figure will help—it’s easier for me to block. It doesn’t really matter in derby because no one is pressing you to be someone certain—it’s all body types.”

Cece agrees. “People who are bigger are proud because that can come in handy. So while they’re getting in shape and losing weight that is technically unhealthy, they are helping their team, and that makes everyone happier.”

Beyond the appeal of an accepting community, there is one very important factor that makes the Iowa City Bruisers a remarkable place for kids: it is the only free, non-government-supported junior roller derby league in the world. There are no fees, and equipment is provided to anyone who can’t afford to buy their own.

Over the course of the last two years, the Iowa City Bruisers have grown to over 60 skaters ranging in age from 6 to 18, all supported by donations and parent volunteers. The size of the group and range of ability levels have necessitated a three-way split, with kids breaking off to work on various skills and goals. The Misfits are the older kids, ready for full contact. Next are the Black Hearted Bruisers, staying no contact as they work to learn more skills and techniques. Finally there are the Bug Bites, the young kids who are just learning to stay vertical on their skates.

“If you have different groups, different levels, it allows you to give each kid a place to move up to,” Beezer explains.

Cece is, of course, a Misfit, and revels in the opportunity to block, jam, and pivot at bouts. She looks forward to joining the adult league when she turns 18, but for now is grateful to her parents for making her dream a reality so that she didn’t have to wait. “I want to stay with it until I physically can’t do roller derby any more, because it’s a big part of my life now. Most things in my life are related around derby, actually.”

Beezer, too, has become consumed by the derby world, in the best way possible.  “It’s pretty much all I think about. As a coach I think, what do I do to get these kids better, and not just their skating lives, their personal lives? All the kids, their confidence level has just gone through the roof—they feel like they can take on anything, any adversity. It instilled a sense of pride in themselves and who they are. They don’t care what other people think about them, it’s what they think of themselves.”

And all this from the dream of one little girl.

Learn more and donate at icbruisers.org.