Known for showcasing stellar musical talent, FAIRfest is one of the coolest music festivals in Iowa. A multi-day, multi-genre event featuring national and local entertainment, FAIRfest draws thousands of people from across the Midwest for one of the richest music experiences in the region.

Attendees will experience “mind blowing performances by Rock and Roll Hall of Fame inductees as well as several Grammy-winning musicians and one of the youngest, most talented guitar proteges to ever hit the circuit,” says festival organizer Erika Richards. 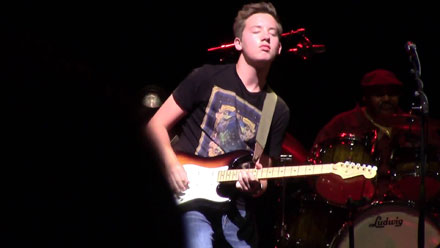 In addition to delivering an unforgettable musical experience, organizers are working with Fairfield Parks and Recreation, festival partners, and volunteers to offer an array of family activities including a fun run, monster slip-and-slide, Mega Farmers’ Market, scavenger hunt, canoe races, full-scale obstacle course, and many other exciting activities—all free of charge, outside the gate.

FAIRfest 2016 will also include the Local Food Summit, featuring a world leader in food rights, Dr. Raj Patel. He will guide listeners through a Symposium on Food Rights, Quality, and Equitable Distribution. FAIRfest and 1st Fridays Art Walk will partner over the entire weekend to oversee art and food vendors for the street-festival portion of FAIRfest.

New to FAIRfest 2016 are a series of speeches given by entrepreneurs at the Fairfield CoLab. The weekend will culminate with the second annual Business Pitch Competition. Contestants can win over $3,500 in cash and financial planning services provided by Libertyville Savings Bank, free accounting services, and 75 percent off a year’s membership at the Fairfield CoLab. “We hope the end result of the contest is more jobs and new economic growth in Fairfield,” says Adam Plagge of the Fairfield Economic Development Association. Applications are available online through gust.com.

Produced in a full partnership between FAIRfest and the Fairfield Arts & Convention Center, the festival is now a ticketed event, with all proceeds to benefit the FACC. Event passes and daily passes are available for purchase at fairfestiowa.com and on the FACC website, fairfieldacc.com.

While historically FAIRfest has been free, changing the 2016 festival into a ticketed event creates a baseline of funds to ensure future festivals. According to FAIRfest founder Rick Sarnat, they have created a “paid admission festival as a way to start building the annual festival’s sustainability going forward.”

Also new this year, the entire festival has been designated a benefit for the FACC. “We are excited to be part of the team that will be promoting this star-studded line-up,” says Rustin Lippincott, executive director of the Fairfield Arts & Convention Center.

Full partnership with the FACC also provides a weatherproof event, with guaranteed indoor performance space in case of rain. Problematic weather is one of the main reasons the festival was rescheduled from late June to Labor Day weekend. In each of the past three years, rain affected some concerts. One especially memorable performance by the Shook Twins and Sam Llanas took place in the candlelit Sondheim Theatre during what was later ruled a tornado.

“This year, with our free wi-fi and social media presence,” Richards says, “we’ll make sure that people know we can comfortably move the festival inside and still have a good time, whether we have lights on or not.”

Lodging is available at local hotels and campsites. Camping locations are posted on fairfestiowa.com.