The first beer I remember really—and I mean really—enjoying was after a harrowing adventure in rock climbing at the Shawangunk Ridge in New York State. “The Horseman” proved to be a treacherous route up a slippery rock that my friends and I had begun waaaaay too late in the afternoon. (I do not recommend rock climbing in the dark, people, especially when your belay partner is above you over the top of a cliff where you can neither see nor hear them.) My terrifying ascent was followed by a rage-filled, fetal-position meltdown at the top of the rock, and a horrendous, stumbly, half-mile hike back down to the parking lot in the pitch black. The only part of that climb that had been planned correctly was the celebratory refreshment waiting in the trunk of the car. That ice-cold Sierra Nevada was heaven.

Born into a family of total teetotalers, raised in a community of absolute abstainers, and educated at an Illinois university with a “dry campus,” I took a long time to discover, and then admit, that once in a while I liked a good beer.

What makes a good beer? If you are my mother, then there is no such thing; it’s all disgusting. “I don’t know how you can stand that stuff.” I feel the same way about kombucha. To me, it smells like someone’s stinky feet. Now why would I go and put that in my mouth?

Beer is an acquired taste. A “good beer” may also be a matter of opinion. And even a matter of mood. In the middle of winter I can enjoy a little-bit-bitter India Pale Ale (IPA), but this past June, as the weather took a turn for the horrid, the hops-heavy menu at my otherwise favorite local joint just wasn’t cutting it. Thus began my quest for a perfect summer beer—the kind that quenches your thirst, puts a zing on your tongue, and leaves a big fat smile on your face. I’d heard tales of microbreweries in Southeast Iowa; it was time to branch out.

My comrades and I, the rosy-cheeked, up-for-anything, and utterly amiable Judy, Bill, and Sean Hickey, decided Kalona Brewing Company was destination numero uno on our mission to explore what our region had to offer by means of grains, hops, yeast, water, fruits, and herbs—the basic ingredients of beer. I had stopped in to KBC once before to enjoy a hot wood-fired pizza; this time I was looking for a hot-weather brew.

One thing KBC definitely has going for it is an impressively extensive selection of craft beers. But even more impressive is that they will happily let you sample away until you find the beer that you want a whole (or half) pint of. The Hickeys and I felt like plunging right in, so we ordered some cheese plates and flights of four craft beers—served in small glasses on a wooden board and accompanied by a handy list of our personally selected brews. If a clever name means anything to you, you also might have been tempted by the ones we settled on: Good Day Sunshine, Raisin’ Cain, and Tango Lemon, to name a few.

Sean was quite happy with his Belgian-style Brew Wit. Bill had found a winner in the Belgian abbey ale Raisin’ Cain. He declared affectionately through a mouthful of Brie, “This one reeks of what you would find in France or Belgium.” (Judging by the amount of beer left in his glass, I knew he meant that as a good thing.) Judy, a proclaimed Scotch drinker, came at the challenge with an open mind. She liked the citrusy Sunshine Honey Wheat ale, but kept coming back to the Tango. “That lemon is so refreshing.”

I was, unfortunately, feeling such pressure about making the perfect recommendation for you lovely readers that my taste buds were becoming confused. I expressed some concern to my research team that the more I sampled, the less I was able to discern the nuances of the beer—and the less I cared! (Whoops! Oh, beer.) Said Bill at 7:40 p.m., “All semblance of scientific inquiry had disappeared by 8:00!”

Luckily we had reinforcements. A couple latecomers arrived to the party toward the end of our first flight. One of them was a bright and brainy young man, Gaelyn, who was a beer maker himself, so, compared to li’l ol’ me, a bit of an expert. After hearing his finely tuned critiques of the Coconut Abbey and Sucha Much IPA, I asked Gaelyn if he would please write this article for me. Sadly for you, he declined. But he did inspire me to try a few more samples. At one point, he slid a small glass toward me and said without apparent agenda, “Try this.” I took a sip, paused a moment, and set down my glass, eyes wide. “Now that is good.” It was a small batch, limited release wheat doppelbock called Lewbricator. Though deeper in color than what I originally had in mind for a summer beer, its malty, rich, caramely flavor was still a revelation.

Kalona Brewing Company, the home of “Heavenly beers, brewed by mere mortals,” also offers several of its brews as take-home six-packs, kegs, and growlers. And seriously, don’t leave that place without trying the baked Brie. 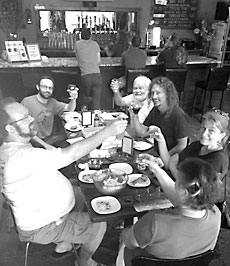 People from all over the U.S. know Knoxville, Iowa, as the “Sprint Car Capitol of the World!” But if you’re ever cruisin’ the town square, you’ll want to stop at Peace Tree Brewing Co., a small but dedicated establishment of craft brews. The Hickeys and I had a couple more friends in tow upon our visit—Helen and Steven. After all, it’s no fun drinking alone.

For Judy, Sean, and Steve, the front-runner was the No Coast, an American IPA with a soft, grapefruity tang. There was a similarly summery Belgo Orange pale ale, but we all agreed the grapefruit had a better balance of sweet and sour.

I was particularly curious about Helen’s take on the offerings. She proclaimed not to be a beer drinker, but was a good sport about it, and was up for tasting. Steve ordered her a smattering of samples and we all watched with curiosity as she sipped, taking plenty of time (and bites of popcorn) between tastes. “The red one makes my ears tickle!” she said. We tried not to laugh as she squinched her eyes shut and shuttered involuntarily.

“Got a favorite?” I asked, after she’d tried them all. “The Blond,” she replied without hesitation, referring to the Belgian Blond Fatale. “The others . . . it’s more like I have to fight with the taste. This one is like . . . it slides right down. It’s easy to drink.”

Gaelyn, our choosiest drinker, liked it too. “It has the most nuanced flavor.” I was in the same camp. The Blond Fatale was sweet and earthy, managing to be complex without being complicated.

Even though I would have been perfectly happy with the Fatale, my experience in Kalona made me wonder about the darker beers on the menu. “I may as well try the Rye Porter while I’m here, right?” Available only in bottles this time of year, I got one anyway, and boy howdy, it was spectacular! A Belgian-style porter with malted rye and chocolate rye, “delicately hopped so as to not overpower the malt flavors,” it was a great taste for the end of the night. I made Helen and Gaelyn—our beer novice and beer expert, respectively—try it. They were both enthusiastic yeses. Good. I wasn’t just imagining things.

Peace Tree doesn’t serve food, per se, but they encourage their customers to order meals for delivery from a handy-dandy local restaurant book they’ve put together. If you just need a light snack, however, they do have salty treats and local Iowa cheeses on hand.

Gaelyn left with four different bottles of brew to enjoy at home, and I’ve since learned that I can buy Peace Tree beer at our local Fairfield grocer. (Way to go, Hy-Vee!) 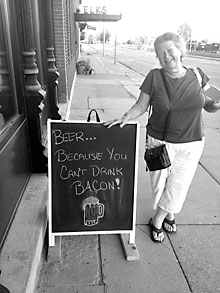 Judy Hickey keeps pace with the team in Fort Madison.

If you are looking for a beautiful view and a good meal, head over to Lost Duck Brewing Company in Fort Madison. The joint, located inside an old brick building with charming stained glass windows and warm interior woodwork, looks out over Fort Madison itself and the wide Mississippi.

We genuinely enjoyed the food—the jicama slaw was so refreshing and zingy that we immediately tried to deconstruct its ingredients. Jicama, ginger, red peppers, lime, and honey? Delish!

But the beer? Two of us got flights of every beer in the house, eight brews in all, and after tasting them all several times, desperate to find one we loved, we just never did. Perhaps the most notable of the bunch was the Raspberry Shandy. (A shandy is typically beer mixed with a soft drink or juice). I imagine this lighter beer with a bright berry kick would quench my thirst after a blistering afternoon in the garden.

Bill shrugged and said, “Where’s the beef?” It was true; all in all, the flavors had little depth. Had I become a beer snob all of a sudden? Maybe, but I’m reminded that a full-bodied brew experience may not be what all beer drinkers are looking for, particularly in the summer. If you want a no-frills flavor, this brewpub could be your thing.

Here’s some exciting news, especially for those in the vicinity of Fairfield: there’s a new microbrewery in town. Doubling as a music venue, the Depot Brewery, located right next to the railroad tracks, has been four years in the making. The place is a work of art, and word on the street is that their beers will be, too. Heath Hoadley, originally from Fairfield, who became a brewmaster while living in Germany, was most recently developing brews for Millstream in Amana, Iowa. When Bob and Judy Bernards offered him a job at the Depot, he jumped at the chance to return to his hometown and do what he loves best. The Hickeys and I are waiting with bated breath (and pint glasses) for word that the Depot Brewery has been federally approved to start serving its full line of ales, IPAs, and stouts. “Could be any day now,” says Bob. Customers can currently enjoy a full bar and live music Thursdays through Sundays.

Here are a few things I learned on this spirited adventure.

1. If you’ve got an already fiery personality, better to stay away from red ales. The Hickeys religiously avoid the stuff. Something about that roasted barley. “Want to get a bunch of Irishmen fighting? A six pack’ll kill ya!” says Bill.

2. When ordering a sampler—a super fun way to explore your beer preferences—don’t order a “float” or a “fleet.” The bartender might look at you cockeyed. It’s a “flight.”

3. For me, when it’s done right, there is nothing like a malty doppelbock or porter. Dark and rich, without being bitter. Exactly how I like my men. And apparently my beer, summer or not!

If you feel like having your own brewpub adventure (with an appointed designated driver of course), there are dozens of microbreweries in Iowa, and more are popping up each year. Check out a full list at IowaCraftBeerTent.com.

And although they’re not a brewery themselves, the Cellar (a.k.a. the “Peanut Pub”) in Oskaloosa has hundreds of beers, many of which are Iowa made. The Hickeys recommend it as the perfect place to start your journey. “Awesome beers!” says Bill. Just don’t get him started on their Bloody Marys. That’s a whole different article.

The Five Teachings of Tomatoes | Musings on a Murky History