At the end of the afternoon, the winning cheeses were brought out for everyone to sample.

Every year, over 40 judges—technical and aesthetic—come together behind brick-thick doors to confer for two long days. These judges hail from as far away as Australia and from the upper echelons of food science programs at Ivy League universities. They are professors, magazine owners, researchers, retailers, and authors. And they are judging cheese.

This year, the American Cheese Society’s annual conference and competition took place in the heart of the Midwest at the Iowa Events Center in Des Moines. The weekend program featured workshops and seminars for members on topics ranging from “Retelling the History of Quebec through Cheese” to the Safe Cheesemaking Series’ “Pathogen Behavior in Cheese.” The conference also served up some cheese-oriented trivia nights for its “curd nerds.” The program’s grand finale: the Festival of Cheese, an opulent, artery-clogging experience open to the public.

An Astounding Array of Cheese

For a $60 admission fee, non-ACS members received access to a gymnasium-sized hall piled high with artfully arranged fromage and lined with vendors peddling wine, beer, cured meat, and artisan oils. The sheer volume of cheese is staggering: the displays feature every one of the contest entrants, which this year reached a record total of 1,843 cheeses submitted by 260 cheesemakers from across the Americas. All available for the nibbling. And if you don’t want to pay the $60 admission (or if you just really want to spend a lot of extra time with the cheese), you can sign up for a seven-hour volunteer shift and receive a complimentary ticket.

My shift begins at 9:30 a.m. the day of the festival. When I check in, I’m given a volunteer T-shirt that reads, “I’m with cheese,” a statement I suspect more can get on board with than most political affiliations in this country today. The woman in front of me in the volunteer line—Kathryn—is a cheesemonger from Dubuque. She works for Hy-Vee and has recently received their Level 3 Certification, which elevates her from the level of “Cheese Specialist” to “Cheese Master.” 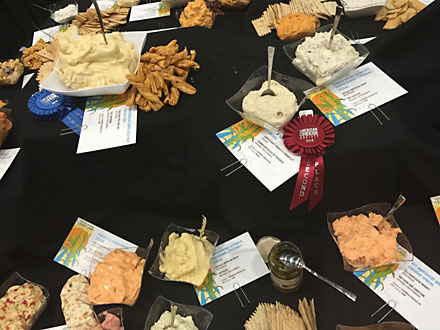 Participants could choose from over 1800 different kinds of cheese to taste.

Kathryn is a fighter. She woke up with a hyperemia—a (visually striking) excess of blood—in her left eye that her doctor tells her is serious, but she has still come to do her seven-hour shift. “I just can’t lift anything heavy,” she tells me.

It’s because of Kathryn that Ilene, the volunteer coordinator, never bothers to ask my level of cheese-handling expertise. Ilene is a pediatrician by day, cheese enthusiast by night. “I’ve never seen a hyperemia that bad!” she exclaims when her eyes land on Kathryn. “That’s some crazy internal thoracic pressure! You two stay together and head over to Fresh/Hard Goat/Sheep,” she tells us, pointing to one of the larger table clusters.

Fresh/Hard Goat/Sheep is exactly what it sounds like. There are five other volunteers already setting up the display tables when we arrive. Thirty-plus varieties of goat and sheep cheese lie stacked in a multi-tiered service tray, awaiting us. Renee, a sassy blue-haired cheesemonger from Saint Paul, is our captain. “All right!” she tells us, picking up a surprisingly large butcher knife from the cutting table. “Let’s cut some cheese!”

Renee has just taken her CCP (Certified Cheese Professional) exam—a grueling assessment conducted by the ACS that requires nine months of study and a $600 registration fee. Renee explains to me that the test requires not just the ability to identify cheeses and their attributes, but a chemical understanding as well.

The Science Behind the Flavors

“You need to know the bacterial cultures, the enzyme reactions, the making process,” Renee explains. “It’s actually pretty satisfying: you start to understand why each cheese has the flavor it does.” She closes her eyes and close-sniffs the cheese she’s about to cut.

“Are you identifying it?” I ask.

“This? Oh no, I read the label on this already. I’m just experiencing it.”

The first cheese Renee has me prepare is “Pecorino Punta” (which Renee thinks sounds dirty) from Hook’s Cheese Company in Wisconsin. I surreptitiously nibble some of the shavings left once I’ve plated the melon-balled mounds; it’s delicious. I’m not a goat/sheep fan, but this one has a soft, nutty flavor that almost disguises the familiar musty-old-farmhouse-basement tang of sheep.

Renee allows me to cut the next two cheeses with her 11-inch-long butcher knife and agrees to my plan to plate them in a ying yang. One of these cheeses will become my favorite from the festival’s 1,800-plus offerings: a saffron-infused goat’s milk number named “Mellow Yellow,” from Yellow Springs Farm in Pennsylvania. With a rich, smooth saffrony flavor, it lives up to its name. 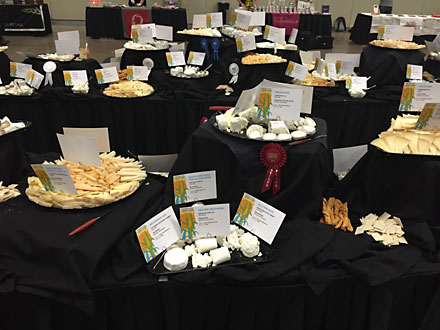 Over 200 cheesemakers from across the country submitted their cheeses.

By this point, Renee is openly nibbling broken fragments, so I follow suit, offering some of the excess tidbits to my other cheese compatriots. In addition to Renee and Kathryn, I meet Andrew, another Hy-Vee cheesemonger who recently helped open a cheese department in the Twin Cities. Andrew bemoans the illegality of Valençay, a raw goat’s milk cheese traditional to the French province of Berry.

“You know,” Andrew says, “the USDA is just a bunch of fussbudgets.”

“Mimolette just got back in though,” Renee reassures him.

“It’s a bright pumpkin-orange cheese made with cheese mites,” Andrew says. “It was banned in the States because the cheese-mite count was too high.”

“They didn’t actually have a number for it, though,” says Renee. “They just said, ‘No, this is too many!’ Because they don’t know what they’re talking about.”

At lunch I get to know another volunteer, Alice, a college professor in the field of Health Science at Northwest Missouri State University.

“Do you go around volunteering for events like this often?” I ask her.

“No, I don’t get much time off,” she says. “This is actually my vacation.” My curiosity piques. I ask Alice how she found out about the cheese festival.

“There’s this cheese shop—here in Des Moines—that I’ve been wanting to visit but haven’t had the chance to. They sent out an email.”

After lunch (which no one really had room for), things heat up: the more delicate fresh cheeses are brought out, and in lieu of cleanly cut cheese, we’re all busy knife-wiping and pulling and prodding pale pastes.

Finally, the winners are brought out for us to plate. I help Andrew with what Renee deems a “sushi-like design” for the final three blue-ribbon recipients on our table, and suddenly, we’re done. The conclusion of our shift is anticlimactic. Gradually, we all disperse.

I return that evening when the official festival begins. I’m handed a wine glass and a small eco-friendly kraft plate as I walk in. The room is alive with chatter and cheese.

I mill about, noting some of Iowa’s own winners: Frisian Farms’ Young Gouda, a third-place recipient whose rich, buttery flavor immediately wins me over, and 50/50 Feta from Reichert’s Dairy Air, another third placer that pleases the palette by conquering the middle ground between vinegary and nutty. I find my favorite regional cheese: Prairie Breeze  by Milton Creamery, made here in southeast Iowa. Though not wearing a ribbon this year, Prairie Breeze has received four blue ribbons in the past, two from the ACS.

By the time I leave, I’m uncomfortably stuffed. I can’t even bring myself to take advantage of the cheese sale—which Renee has told me is an odd mixture of amazing bargains and mediocre deals (“You really have to know your cheese”)—once I discover the Mellow Yellow is already gone.

I run into Alice, who’s drinking water from her wine glass and laughing with her husband. We exchange emails, and she says she’ll forward me her newsletters so I can get on the lists. I ask her for the name of the cheese shop here in Des Moines, the one she’s on mailing list of. “Oh,” she says with a smile. “It’s the Cheese Shop.”