Pranav was born with one piece of the puzzle already in place: mission. His parents run a nonprofit that sets up schools in some of India’s most destitute areas. From the age of three, Pranav worked in those schools every summer. The lack of basic resources these children suffer deeply affected Pranav, and he wanted to do more. He decided that instead of having a birthday party every year, he would redirect those resources to an orphanage.

“The kids have only a bun each day for lunch, and no breakfast,” Pranav explains. “So I thought one day I want to give them a full meal.”

The next step for Pranav on the road to purpose was passion, and his turned out to be an unusual one. “A few years ago, when I was too lazy to brush my teeth in the morning, my dad had me spit into a petri dish just to see how much bacteria is in my mouth,” he said. “I was amazed to  see the bacteria, and then my interest grew in oral hygiene and its importance.” 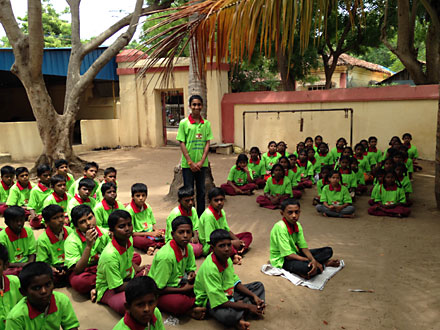 Pranav does service work at schools in India each summer.

“I realized that all these people in slums and people who can’t afford health care, they basically rot,” he says. “So I thought there could definitely be a dental hygiene method everybody could use regardless of economic status.”

Pranav began his research on a small scale, testing some of his classmates and teachers to see how bacteria levels in the mouth change before and after tooth brushing with commercial toothpaste. He also incorporated dental hygiene into his volunteer work by offering dental awareness camps to children.

Then he noticed something. “The kids were using totally different cleaning methods, like oil swishing, neem twig rubbing, and herbal mouthwashes,” he recalls. “So I thought, okay, let’s see about those methods.”

Pranav expanded his experiment to 88 subjects in 8 different groups: tooth brushing, toothpaste brushing and tongue cleaning, oil swishing, neem twig rubbing, and a method he created called the GIFT method (Gum Inner Finger rubbing and Tongue cleaning). The GIFT method is a cost-free cleaning system, because a finger, rather than a toothbrush, is used to scrub the teeth, tongue, and gums. Attempting to innovate further, Pranav even made his own mouthwash. “That turned out to be really bad, actually, taste and effect wise,” Pranav laughs.

During the course of experimentation, Pranav developed a form of activated charcoal, a substance his Indian ancestors have been using to clean their teeth for 12 generations with great success. Pranav’s activated charcoal is derived from rice husks, a product typically considered waste material. The technology is simple, cost-effective, and eco-friendly.

This product is particularly important for developing countries, where people may not have access to commercial toothpaste. Pranav has applied for a provisional patent on different methods to activate charcoal that not only remove bacteria and whiten teeth, but also absorb tooth-damaging acids produced by bacteria.

“I notice that I like to do one thing and take it to a higher level,” Pranav says of his work. This passion for excellence has led Pranav to a profession—science. He won the Grand Championship at the Eastern Iowa State Science Fair in grades seven and eight, the Grand Championship at the state fair in grades eight and nine, and attended the Intel fair as an observer for the last two years. For the last three years Pranav won a trip to the Intel International Science and Engineering Fair in Phoenix, Arizona, and this year, as a high school student, he was at last able to compete with the other students, not merely observe. In his first year of competing, Pranav took fourth place in the Microbiology category.

It remains to be seen what Pranav’s vocation will be, since he’ll only be a sophomore next year, but he plans to continue with his research. “This year I’m planning on expanding my project. I want to make some technology,” he explains. Pranav is also sharing his knowledge with the children in India. “I teach science through Skype most mornings from 7:00 to 7:30, and I’ll still give my dental awareness camp every summer.”

An additional volunteer project has also presented itself. “Four months after I left India last summer there was a very, very bad cyclone that destroyed the whole school,” he says. Pranav wants to rebuild the school bigger than before, and include modern bathrooms and a science lab. He is currently fundraising towards that effort, and has started by donating the entirety of his own savings, $1,100, to get the site cleaned and a temporary shelter erected.

Interviewing Pranav was a pleasure, and has given me ideas for raising my own children. I think what his parents have done by regularly including him in volunteer work from an early age is brilliant. If mission is an integral piece of finding one’s purpose in life, what better way to begin? Seeing how that mission—caring for children in slums—led to an interest in science makes me very excited to see how Pranav will develop in the future. So far, I think we can all agree he is off to a good start.

The Maker Space at Maharishi School: A Creative Springboard for Kids