Anu Ghimire (center), an engineer at Cambridge, is the volunteer teach for Fairfield’s Girls Who Code club. (photo by Juliet Jarmosco)

DID YOU KNOW THAT  fewer young women graduate with computer science degrees today than in the 1980s? The percentage has dropped from around 37 percent in the early ’80s to only 18 percent currently. When Deborah Pogel saw that statistic in a Wired article about Girls Who Code clubs, she leapt into action. She joined forces with Bonnie Hilger and Diana Seibert to organize a Girls Who Code club in Fairfield, one of three in Iowa. “Women are a minority in computer science,” says Pogel. “I’d like to be helpful in changing that.”

Young women are often subtly discouraged from pursuing careers in math and science, and there’s a dearth of female role models for them in the computer science industry. Girls Who Code (GWC) works to fill that gap by offering education and support. Pogel says that starting at an early age really helps girls secure a place in the computer science arena.

To get the GWC club going, she dispatched a flurry of emails looking for a volunteer teacher, and was rewarded by a quick response from Anu Ghimire, an engineer who works at Cambridge. “I jumped at the opportunity,” Ghimire says. “I’m always passionate about inspiring other women to code.”

Girls Who Code is a national non-profit for sixth to twelfth graders that was started in New York in 2012. Clubs are now found in every state, with a goal of teaching one million girls to code by 2020. These free after-school clubs, staffed by volunteers, offer a supportive space for girls to explore computer science and learn skills such as coding, app design, and web design. A core component of the program is the CS (Computer Science) Impact Project, in which students use computer science to solve a problem in their school or community. Girls are also inspired by learning about top women in the field. 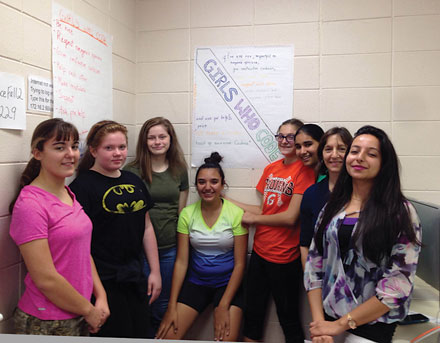 In Fairfield, the six enthusiastic girls who form the local Girls Who Code Club—Emma Clubb, Hannah Clubb, Catherine Lowe, Sarah Lowe, Danae Miller and Shristi Sharma—meet once a week in the evening at the Fairfield High School Library.

Sarah Lowe joined the club because “I really wanted to learn to code and I thought it would be fun to be in a group of girls that would support each other.” She says she’s learned a lot about teamwork and inspirational women in the industry. She’s excited about what she’s learning,  she says, “because in the modern world, it’s going to be really helpful to me, especially since a lot of jobs require” knowing how to code.

Her sister, Catherine Lowe, says she wanted to learn to code “because I didn’t know anything about it and it intrigued me a lot.” She adds, “I wanted to try something new that could be applied to a lot of situations and could be really helpful later on.”

Danae Miller had already been interested in coding. When she heard that Ghimire would be teaching, she immediately signed up. She’d met Ghimire previously and been impressed by the app that she had designed. “It looked really cool,” she says, “and I thought coding could be really fun.”

Emma Clubb heard about Girls Who Code from her 4-H leader. She’d learned some basic coding in school but wanted to learn more. And she really enjoys the group dynamic. “I like how we all communicate and talk stuff through,” she says. 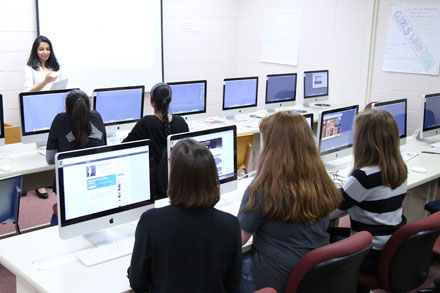 Club members learn new skills and support each other.  (photo by Juliet Jarmosco)

Her sister, Hannah Clubb, is also in the Robotics Club. “I need to know coding to help program a robot,” she says. Although Hannah wants to be a rancher when she’s older, she thinks “coding is something I can fall back on to help support myself later—ranching doesn’t make enough money.” Her favorite thing about the club is the camaraderie, and how easily they all get along. “I like everyone in here—that’s what I like most.”

That also appeals to Shristi Sharma.    “I wanted to be in a community—or what we like to refer to as a sisterhood of girl coders,” she says. Sharma has previous coding experience and thought “it would be really fun to have other girls for support, and to do things together as a team.”

She’s excited to start working on their CS Impact project, an anti-bullying website. “It’s a really big issue for us and we want to do something to help.”

Not only does Girls Who Code provide tech training that equips girls for the future, it also supplies a support network for job experience. Internships and job opportunities are available to Girls Who Code alumni. The organization has partnered with 60 top companies, including Dell, Deloitte, ESPN, Infosys Foundation USA, Prudential, and Target.

Many in the tech industry agree that having more women coders benefits everyone, by allowing the creation of products that are relevant to all types of people.

“I think it’s really cool we’re doing this,” says Sharma. “Technology is the future and I really want to be a part of it. I don’t want to be left behind. I think it’s awesome if you start at a younger age—you can plan for your future and get involved more. That’s just really cool.”

Membership in the Fairfield GWC club is closed at the moment, but will reopen for new members next semester and next school year. No prior coding experience is necessary. For more information, contact Deborah Pogel at dpogel@gmail.com or Anu Ghimire at anughimire@gmail.com.