The Mind Travelers’ Aquarium is an enchanting fiber arts installation in the Fountain Lobby of the University of Iowa Hospitals and Museums.

STEP INTO the Fountain Lobby at the University of Iowa Hospitals and Clinics and you encounter a fantastical undersea world. Brightly colored fabric-art jellyfish showcased in seven glass cases throughout the entryway beckon your attention. These vibrant imaginary sea creatures are multidisciplinary artist Sayuri Sasaki Hemann’s new project, Mind Travelers’ Aquarium, a changing, interactive installation that transforms the space with unexpected charm.

The artist, who now lives in Iowa City, began her ongoing Urban Aquarium project in Oregon in 2009, with an installation at the Portland International Airport. Since then, her fiber-art creations have traveled throughout the U.S. The UIHC installation will be on view until November 25. 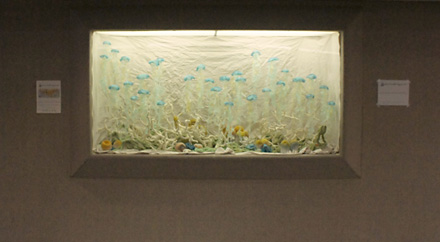 Aquarium installation in the lobby.

As you enter the lobby, the jellyfish are artfully suspended in small aquariums as if swimming through them. Each case contains a different species, with a name placard and environmental origin, just like in a real aquarium. But the names and descriptions are full of whimsical humor, like the Electric Moss Jelly, Moonlight Parade, and Magic Jelly, which “likes ice cream.”

“Some people don’t realize it’s all from my head until they read that this guy likes ice cream,” Sayuri laughs. The intricate creations are made of tulle, organza, silk, and cheesecloth, with felted sea beds, barnacles, coral, and seaweed completing the environment. 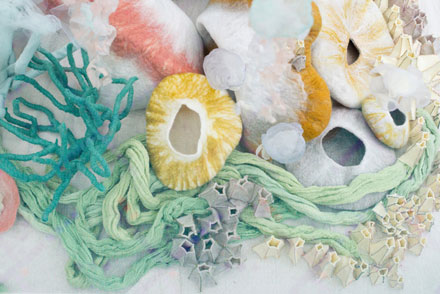 Aquarium detail with coral and seaweed constructed of fabric.

Sayuri created all the jellyfish that populate six of the cases. The seventh case, titled the Possibility Tank, started out empty when the show opened in September. It has gradually filled up with jellyfish and barnacles created in the free workshops Sayuri hosts. There have been a few jellyfish-making workshops in the hospital, with upcoming barnacle workshops on November 4 at UIHC and November 7 at the Iowa City Public Library.

“I like to incorporate public participation in my work, and public engagement,” she says, “because it adds a lot more value to the artwork. The audience doesn’t have to be passive—people are empowered to be part of a bigger project.”

Sayuri fell in love with jellyfish while making props in the art department of a TV station. “I learned so much from it, but it was very stressful,” she says. Looking for a place to decompress, she “happened to go to the aquarium and looked at the jellyfish. It just took me to another world. The way they move is so calming. It’s just magical.”

She’s also intrigued by the duality inherent in a jellyfish. “It’s so beautiful, but it stings. There’s a dark side to it, which is kind of exciting and mysterious. I think that lends itself to making myths and stories, to opening up possibilities.” 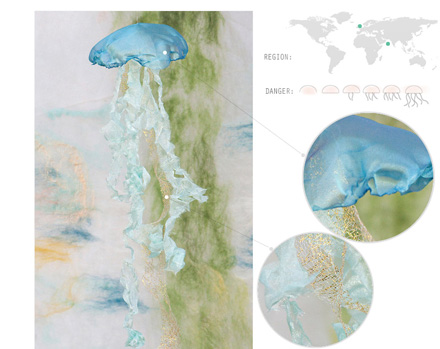 The artist created new jellyfish species with whimsical histories, like the Midsummer Night’s Dream jellyfish: "The sparkly golden tentacles produce splashes of dreams on a hot summer night in the moonlight. The longer the tentacles, the more dreams it can splash!"

Sayuri started making individual jellyfish and thought it would be more dynamic to have schools of jellyfish in different spaces. Her Urban Aquarium project was born. Starting out in a small space in Portland, the installation has evolved as it moved to new locations. “Each place it went, it had a different interaction with the environment. That’s very exciting to me.”

Her installation explores ideas of displacement and context, with sea-loving jellyfish displayed in artificial containers. “The jellyfish in the wild are displaced when put in an aquarium. Likewise, the jellyfish in the aquarium are displaced when put in front of public passersby. In this particular environment at UIHC, where people from all over Iowa come to receive specialized care, this project is charged with another layer of meaning: the aquarium becomes an oasis, an escape, for those in that intense, high-stress environment, whether it be for patients, families, healthcare providers, employees, or visitors.”

Sayuri also likes that people have to move through the space to see each different jellyfish species, just like in a real aquarium. Each species has its own intricate variations and quirky personality, and people have to walk from case to case to get the full experience. This voyage through imagination is one of the goals of the installation. Sayuri says she “seeks to create a shared experience that lets all minds travel through water, waves, and light, imagined or real, or somewhere in between.”

Sayuri will be giving a talk at the Iowa City Public Library on Thursday, November 17, 7 p.m.

For more information, see Sayuri’s World on Facebook, mindtravelersaquarium.com, or Sayurisworld.com. The Mind Travelers’ Aquarium is supported in part by the Iowa Arts Council, a division of the Iowa Department of Cultural Affairs, the National Endowment for the Arts, and the Iowa City Public Art Program.

Weird Thanksgiving Side Dishes: The Bizarre Evolution of Holiday Favorites