A historic barn is the home of the new Rapid Creek Cidery north of Iowa City.

Overlooking the gently rolling hills of Wilson’s Orchard stands a century-old barn surrounded by tidy rows of apple trees and native oak forest. Reconstructed just as it stood on its original farm property, this historic structure is destined to take on a new life as the home of Rapid Creek Cidery—the latest endeavor of Wilson’s new owner Paul Rasch, his daughter Katie Goering, and James Beard-nominated chef Matt Steigerwald.

Rapid Creek Cidery is an enterprise that merges tradition with innovation. Part taproom, part gastropub, part event center, it celebrates the flavors of the land and expands upon Wilson’s offerings, serving as a vibrant indoor community space in which to gather, sample handcrafted specialty brews, and savor locally inspired seasonal fare all year round.

The cidery builds upon the legacy of the orchard. “Our goal is to create the same feeling of community that exists among orchard visitors at the cidery,” says owner and event manager Katie Goering. “Just as the orchard allows visitors to have a direct connection with where they are getting the fruit, the cidery menu will use local produce and livestock wherever possible.”

Fourth-generation orchardist Paul Rasch and his wife Sara Goering purchased the orchard in 2009 from the founders, Robert and Joyce Wilson, who planted over 100 varieties of apples on their 88-acre plot of land north of Iowa City. As their trees grew, they sampled the fruit from each and selected the best-tasting varieties—carefully crafting a diversified orchard bursting with flavor. Wilson’s Orchard quickly became one of Iowa’s most-loved u-pick destinations.

The Rasch family also owns Fox Ridge Farm, another commercial apple orchard just down the road from Wilson’s. With both sites under unified management, Paul Rasch has steadily developed a variety of products such as “take and bake” pies, apple cider vinegars, apple butters, preserves, and both sweet (unfermented) and hard (boozy) apple cider.

Wilson’s Hard Apple Cider made its debut in September of 2015 and now bottles four fermented brews to grocers and bars around Iowa. The cidery bar will afford visitors the opportunity to taste some truly unique flavors, crafted in small batches fresh from the land. 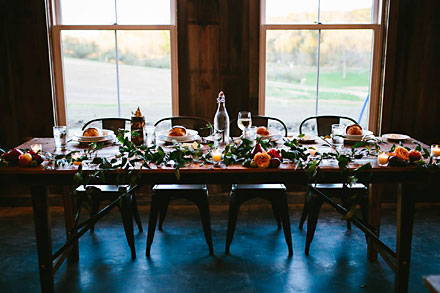 Orchardist Paul Rasch is a firm believer in sustainable systems. He aims to use everything that comes off the orchard to fuel some other component of the business. Along these lines, he recently began raising heritage breeds of sheep and pork—sourcing a portion of their feed from apple pumace, the nutrient-dense “waste” product of their cider press. Not only does this elevate the flavor profile of the meat, but it also recycles nutrients from the trees back into the soil via onsite composting.

Matt Steigerwald moved to Iowa in 2000 and quickly gained fame as chef of the much-loved Lincoln Winebar and Lincoln Café in Mount Vernon—named by the Chicago Tribune as one of the 10 best restaurants in the Midwest.

Upon closing Lincoln Café, he helped  open the Cedar Rapids location of New Pioneer Co-op in 2014. Then in October 2016, he found a home for himself in the Rapid Creek Cidery team.

“There are some great chefs around,” Steigerwald says, “and I think most of them weren’t here the last time I was running a kitchen. I’m looking forward to being part of that community again.”

As for the menu of Rapid Creek Cidery, Steigerwald wants the food to be relaxed.  “Nothing too fussy, but very cared for,” he says. “The style follows a trajectory I’ve been on for several years . . . a move toward simplicity on the plate. Gutsy, strong flavors that reflect what we’re hungry for and hopefully what our guests are hungry for as well.

“Obviously, we’ll be focusing on local and organic produce and product wherever possible,” he adds. “Wilson’s has both sheep and hogs that we will incorporate into the menu for sure, and we have great relationships with places on the coasts and the Great Lakes for fresh fish and shellfish as well.

“I’m also excited about pushing some really cool vegetarian dishes. We have great local tofu right in Iowa City now, so making that a part of what we do sounds exciting.”

Steigerwald envisions a relaxed, communal experience at Rapid Creek Cidery, a restaurant filled with happy conversation and hungry bellies. Goering describes a special feeling of place: “I think two of the things that make the space so unique are the setting [overlooking the orchard, pond, and willow trees] and the actual barn building,” she says. “We have some large communal tables in the cidery [built by local craftsman Ryan Krafka] that fit with our vision of creating a community gathering place and helping to build a cider culture.”

The restaurant and taproom will open later this spring, serving dinner Wednesday through Saturday and brunch on Saturday and Sunday. To stay in the loop, follow along on Facebook or Instagram: @rapidcreekcidery.

Disrupter in Chief: Investing During the Trump Presidency