Whitney Rose is one of country-rock music’s rising stars. She has taken the scene by storm ever since moving from her native Canada to Austin, Texas, in 2015. Her latest release, the extended play disc South Texas Suite (2017), is a love song to her new home. Rose said that there’s something magical about the Lone Star state that compelled her to emigrate.

“Oh, I love Iowa, too,” Rose gushed over the phone, although she admitted she hasn’t spent much time around the place. Rose played Davenport back in August 2016 but had to leave for the next show soon afterwards. She hopes to check out the area this time around before she leaves the country on a two-month European tour. Her Iowa stop comes right after South by Southwest this year, where she is scheduled to perform several times. Her performances were highlights of last year’s SXSW and helped give her the impetus to tour around the country.

Rose turned the Daytrotter stage in Davenport into a honky-tonk last August with a wild set of self-penned numbers, including “The Devil Borrowed My Boots,” “The Last Party,” and “Lasso.” She riled up the crowd through her energetic singing, playing, and stage maneuvers. She hopes there will be many “repeat offenders” at her March 21 gig at Davenport’s Village Theater.

“I like to put on a rocking show,” Rose said. “I will have a new set of accompanists and be part of a four-piece band with a drummer, bass player, electric guitarist—and me on acoustic guitar and singing lead.”

While there is a strong element of fun in her presentations, Rose is resolute about her art. She always strives to learn and develop, and she takes her performances seriously. “My goal is always to get better, so I hope people who saw me the first time will see how much I have improved!” Rose spoke with a laugh in her voice.

Rose released one of 2016’s finest albums, Heartbreaker of the Year, to much critical acclaim. Produced by the Mavericks’ Raul Malo, the disc also includes a duet with the velvet-voiced Malo on the old Ronettes’ tune “Be My Baby.” The single made many year-end “best of” lists. “Working with Raul Malo was like a dream come true,” Rose said. “He knows how to make things seem simple and effortless even when they are not.” Rose claimed she absorbed a lot from Malo and felt comfortable producing herself and others on her new EP. 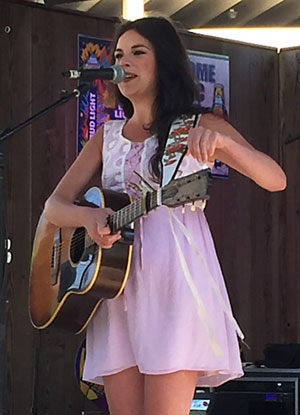 “I signed with my new label, Six Shooter, and was told there was no room on the release schedule until fall 2017,” Rose said. “That album is scheduled to be recorded in Nashville, probably again with Malo. But I knew I also wanted to do something in my newly adopted home in Texas. The label gave me permission to put out an EP, so I gathered up my friends and whatever Austin artists I could convince to help me and made South Texas Suite.”

The disc was recorded in hard-country artist Dale Watson’s North Austin studio with local legends who have backed up some of best, such as Redd Volkaert (Merle Haggard), Kevin Smith (Willie Nelson), and Earl Poole Ball (Johnny Cash). Watson enjoys a reputation as a wild man whose own records can veer from the weird and zany to the dead earnest and sincere and back on a dime.

“He’s crazy,” Rose confirmed, “and he’s beautiful. His passion can lead to extremes in the best ways possible.” Rose is no shrinking violet herself. Her musical persona powerfully asserts her own self-worth and declares her individuality and strength.

Take the first single from her new EP, “My Boots.” Rose proclaims she’s ready to meet her boyfriend’s mother, but she’s not about to change to make a good impression. Rose is going to wear her cowgirl boots and secondhand clothes and drink whiskey, just like she always does.

Speaking of boots, Rose has several pairs, including a couple of custom-made ones from Liberty Boots that are “incredibly intricate and simply beautiful at the same time.” Rose said that when she goes back to Canada, people stare at them, but she doesn’t care because she’s comfortable in what she’s wearing.

“Dressing myself up is something I enjoy and helps keep me sane,” Rose admitted. “It makes me feel good. One of my favorite activities is shopping in small-town thrift stores and antique shops for outfits. It’s cheap therapy.”

Rose still hasn’t seen the central or western part of Iowa and asked what it was like. Her tone of voice suggested she has wanderlust and wants to see every place in an effort to make herself and her music richer with experience. The rest of us would benefit by her company.