Quick, name three famous Asian-American rock and rollers. Give up? There are plenty you could name—Karen O from the Yeah Yeah Yeahs, James Iha from Smashing Pumpkins, or William Hung of the off-key American Idol audition. But the stereotype is that while Asian Americans are good at classical music, they can’t rock.

That’s one of the primary reasons Andrew Choi changed his stage name to St. Lenox. “I’ll be honest, it’s a difficult market in America for an Asian American musician,” Choi says. “I’ve had a lot of experience with people telling me up front that they expected me to be awful because I was Asian.”

In case you’re wondering who he named himself after, it’s not a person. He took the name from a sign on the New York subway terminal in Harlem: “148 St.—Lenox Terminal.” The musical act St. Lenox is an individual and sometimes a band (think John Darnielle and the Mountain Goats as another example) in the indie-pop tradition.

St. Lenox has been critically acclaimed by NPR, PopMatters, Consequence of Sound, Stereogum, and other hip publications. His two albums (Ten Songs About Memory and Hope and Ten Hymns From My American Gothic) were featured on many “best of the year” lists in 2015 and 2016. He’s been compared to artists as different as Motown’s Stevie Wonder, freak folkie Joanna Newsom, country singer Chris Stapleton, balladeer Billy Joel, and singer-songwriter Paul Simon, which indicates how hard it is to describe his music. The one thing critics agree on is just how good he is!

Choi’s parents left Korea when his dad got a teaching job at Iowa State University in Ames, and Choi grew up there until sixth grade, when he moved to pursue violin studies. He won several national and international competitions and returned to Ames for high school. In Iowa, he performed with the Des Moines Symphony and served as the concert master of the Iowa All-State Orchestra.

After high school, he went off to Princeton but came back to live with his parents in Ames for a year. He then went on to earn a doctorate in philosophy from Ohio State University, followed by a Juris Doctorate (J.D.) degree from New York University. Besides being a musician, St. Lenox is a practicing attorney.

“When I was younger, I didn’t necessarily think of myself as Asian,” he said. “I mean, I did,obviously, but I think being a child and not really understanding the ways of the world can be a kind of buffer when it comes to issues like race. It wasn’t until maybe high school that difference in race was more of a ‘thing’ that I noticed, if that makes sense.

“I’ve talked with classmates lately about our shared high school experiences, and I think, looking back, many of us didn’t realize the extent to which we might have been treated differently because of race.

“That said, one thing I’ve noticed is how much I’ve retained some connection with people that I knew in high school—especially compared to my college years,” Choi explained. “I think it’s something about the character of people in Iowa. I consider them more like family.” 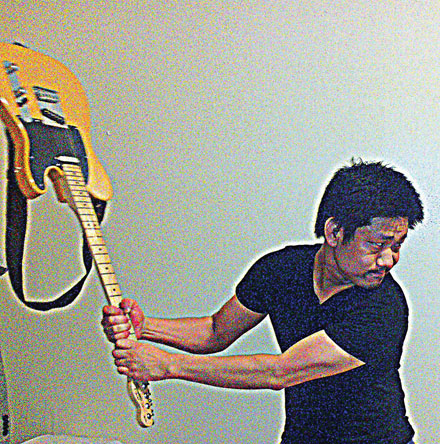 This is clearly evident in his music.  “The song ‘The Public School System’ is about Ames High School—with some creative license thrown in to keep it from being too descriptive. The song ‘Fuel America’ is also set in Iowa—a kind of manifest destiny piece in the context of American wanderlust. The song ‘To Be Young Again’ is also set in Ames, and recounts moments from my high school years.

“I mean, there’s almost too much for me to say when I think of the state,” says Choi. “That’s part of why Iowa serves as the backdrop for so many different songs that I write—to capture it all, I’d have to keep writing I guess, right?

Although there are no definitive dates set, St. Lenox hopes to tour Iowa this summer and in the fall. His next official gig will be in July at the prestigious Knitting Factory club in New York City. His most recent project, completed in April, was making videos to go with each of the songs on Ten Hymns From My American Gothic.

“It was a really good way to work out my thoughts ever since the election in November,” he says. “Part of the reason I do music is I can say a lot of things that people generally don’t say. I mean, you look at indie music and the subject matter ends up being something equivalent to young-adult narratives—young ambition and passionate love. I think you have the same thing with video. Music videos are all about art-house backdrops, experiments with video technology, or people hanging out with their friends. I think I’m providing something more complex and thoughtful, or at least different.” You can find St. Lenox videos on YouTube.

The songs concern a range of topics: his relationship to his parents, what it means to be a second-generation American, the resignation of Richard Nixon, and Supreme Court Justice Thurgood Marshall, whom he considers to be his hero.

“I think I write a lot of songs as sort of memory capsules, to help me remember something important in the future,” he says. “I want to try and capture what I’m feeling at a given time, and then when I listen to it again in the future, I can remember that feeling.”

Welcome to the Fairfield MakerSpace: Access to Tools & Training