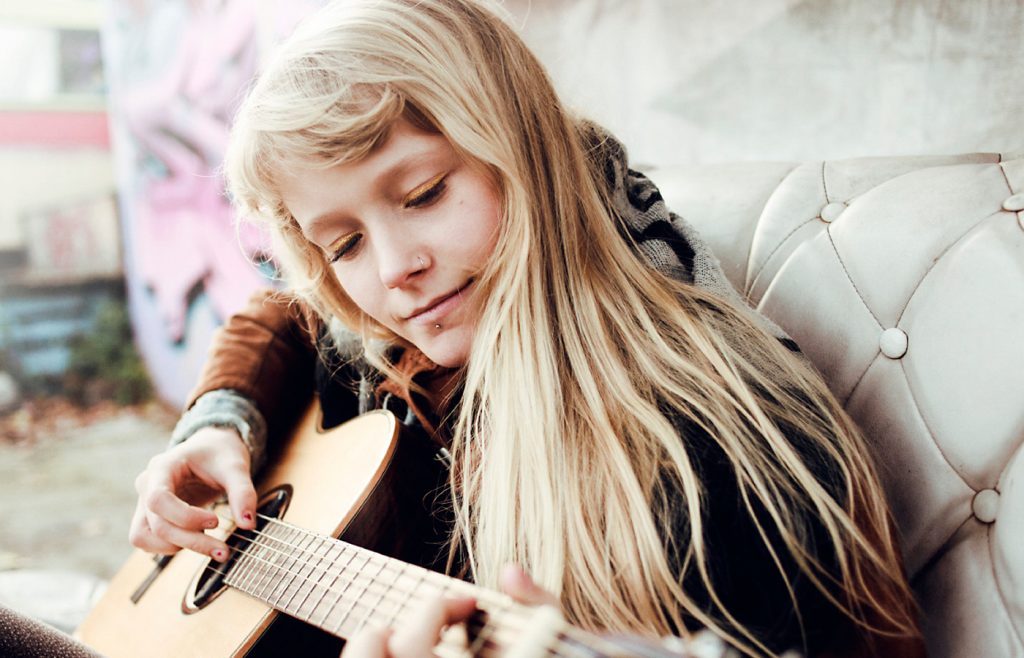 At age 16, Alice Phoebe Lou left her home in Cape Town, South Africa, to live with her aunt in Paris before she journeyed to Spain and Italy. She ultimately settled into the street music scene in Berlin. In 2013, Alice had been singing on the streets of Berlin when her TEDx performance encouraging social and environmental responsibility went viral.

Now this 23-year-old appears to be emerging onto the world stage. After contributing lead vocals to the 2014 house music song “Man on the Moon” for the German DJ and electronic composer KlangKuenstler (a.k.a. Michael Korb) on the CD That’s Me, she released her first solo CD, Orbit, in 2016.

Here are my recommended tracks:

“Man on the Moon” has been remixed several times, but I prefer the original version from the CD That’s Me. This upbeat song shares the experience of taking a hot air balloon ride at “far o’clock in the afternoon” and rising to greet the man in the moon. The instrumental backdrop tickles endorphins from listeners’ brains as it moves across keyboards, rhythm and bass, synthesizer, echo chambers, percussion effects, and a trailing organ solo.

The CD title track “Orbit” begins like a street performance, with acoustic guitar and vocals, then violin and piano interplay delicately shape the song in a way that seems influenced by her exposure to European music. The last three minutes drift through a dreamlike fade, with soft horns, twinkling piano, and whispered electronic effects that lift the earlier lyrics: “One foot on the pavement and one foot in the Milky Way. I am soaring . . . soaring.”

“Walking in the Garden” reminds me of the swanky, jazz-tinged vocal journeys of Rising Appalachia, a sister duo from Asheville, NC. The lyrics at the beginning of the song come back at the end of each verse, expressing Alice’s desire for political change: “We got footsteps moving slow, we got less power and more control, we got a man up there who’s so big and bold, it’s getting old.” Through the purity of Alice’s voice, the message is expressed through subtle shifts and slides into phrasing and note changes. Like the previous song, the ending instrumental is magnificent.

“Girl on an Island” is a great companion piece to “Walking in the Garden.” It feels very much like 2005’s “My Room Is White” by Mia Doi Todd. Both songs are gently delivered reflections about finding a better space for life to unfold.

In a May 2016 review of Alice’s performance at a pub in Dublin, Ireland, reviewer Marta Geesing observed: “The mix of seeing this tiny singer come up on stage and wow you with her both incredibly loud but gentle voice—which no matter how many times you see her perform, still gives you goosebumps—and the fact that there’s no false pretenses surrounding the singer, she’s all open, honest, and truly down to earth—even swearing on stage but sweetly apologizing for it after—that just makes one happy.”

A fresh air of sparkle and serene satisfaction accompanies Alice Phoebe Lou.  Take the time to appreciate her joy of life and anticipate more good music from her rising light.

Welcome to the Fairfield MakerSpace: Access to Tools & Training

River Getaway in Bentonsport | Kayaking, Canoeing and Other Summery Sports