It seems like only yesterday that Wayne Coyne was walking over our heads in a giant hamster ball—but it’s been a full 10 years now, and look how far Des Moines has come. 80/35 Music Festival came out with a bang in year one with the Flaming Lips’ groundbreaking set, proving that large-scale outdoor events in the heart of downtown Des Moines were not only viable but also downright magical.

Each year the organizers at Des Moines Music Coalition and their partners have skillfully tweaked and refined the festival, adding new elements to engage an ever-broader Iowa arts scene. And the music scene itself has grown along with 80/35.

“I think we’ve seen our smaller venues mature and more bands take chances to hit the regional and national scene,” said festival organizer and founder Amedeo Rossi. “Our bigger venues and the arena have really taken off, and we are seeing more and more top bands.”

The music market’s dramatic expansion—aided in large part by events like 80/35—has allowed the festival to secure top-flight bookings, which this year include hit-makers MGMT, the Shins, and Action Bronson. But the festival has also been careful to nurture and celebrate the local community along the way. One way they do this is by featuring top Iowa bands who’ve managed to grow to regional and national acclaim.

“Quality acts are always a prize, and it’s important to bring in the acts which have reached that larger audience outside of Iowa,” Rossi said. “We’ve been able to provide a larger stage and crowds for these sorts of bands.”

80/35 has also devoted resources and platforms to the next generation of local musical talent with their well-executed Generation Z stage at the festival, as well as with music camps and rock/hip-hop school programming throughout the year. “Lots of seeds are being planted,” Rossi said. “It’s a hopeful time for Iowa music.”

So as you prepare your weekend and parse the thick schedule of events on three stages that will take over downtown Des Moines July 7–8, let me make a few recommendations from below the top billing that show the range of talent that has made 80/35 into Iowa’s signature outdoor musical event. 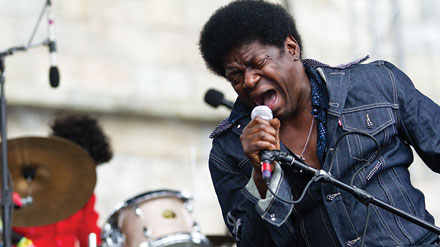 Rock ’n’ roll as ecstatic spiritual experience. That’s what you’re in for at a Charles Bradley concert. The storied performer began as a James Brown impersonator, and the Godfather of Soul’s influence on Bradley’s moves and vocal techniques have been carefully honed through his decades in music. Bradley’s active touring schedule was disrupted last year by illness, but now he’s back, providing a musical transcendence that few artists can offer. His three releases on Daptone Records have been increasingly excellent, but it’s in live performance that we witness the vital beating heart of soul.

Modern Life Is War may be the most renowned Iowa act to ever play the festival. 80/35 has done a great job incorporating Iowa “legacy” bands over the years, including House of Large Sizes, William Elliott Whitmore, The Envy Corps, Leslie & the Ly’s, and the Poison Control Center. But MLIW is in a category of its own when it comes to Iowa music. The band was a volcanic presence on the national hardcore punk scene in the early to mid aughts, representing their hometown of Marshalltown every step of the way. Their classic albums Witness and Midnight in America became influential hardcore records of the era. After going on a galvanizing farewell tour (capped by a legendary “final” show in Marshalltown), the band took five years off before mounting a triumphant surprise comeback in 2013 with the blistering new record Fever Hunting. Their return to live shows has been met by impassioned fans around the world. MLIW’s place in Iowa punk history, plus their sterling record for madness-inducing performances—especially before their home audience—make this one of 80/35’s all-time must-see sets.

The inspiring harmonies will catch your attention first, but be sure to key into Elephant Revival’s superb rhythms, too, anchored by the masterful washboard work of Bonnie Paine. A vaguely spiritual aura surrounds this band, their subtlety and gracefulness inducing a dreamlike feeling. They are a regular on the bluegrass festival circuit, but you don’t need to be barefooted to appreciate these players; their raw musicianship is more than enough.

This Minneapolis trio has a knack for going to the heart of a melody with a refreshing clarity, uncluttered and to the point. It’s one of those acts that will not only impress you when you see them, but will also linger in your mind for days afterward, when their songs are still playing in your head.

On the strength of her phenomenal new record That’s All I Wanted, Iowa City’s Elizabeth Moen is distinguishing herself as a masterful guitarist, with songwriting and vocal power to match. Her album (recorded at Flat Black Studios) captures the commanding presence of her music: Check out the spacious, three-dimensional sound of the new track “Catch You,” for instance. Just wow. In live performance, she earns close attention with the immense control she has over her instruments. Don’t miss this set.

The Des Moines duo of Catherine Lewin and Louise Bequeaith transmit the pure pleasure of playing music with a friend (they’ve been close since they were children) while delivering strong pop tunes featuring often biting lyrics. Their self-released record Make Ya Mother Proud is packed with memorable songs that thrive on smart craft. If any two-piece at 80/35 can cut through the heat and make an impression, it’ll be Glitter Density.

With a few exceptions, the 80/35 bookers stayed away from metal in their first few years, but in recent editions representatives from the heavier side of Iowa sounds have made their way into the lineup, such as Green Death and Druids. But sets from Iowa acts Closet Witch and Traffic Death will up the ante with brutal, brief sets that traverse the metal, hardcore, and grind genres. Closet Witch has become a hit in the Midwest DIY scene with a ferocious live performance centered on kinetic vocalist Mollie Piatetsky. Traffic Death is the latest incarnation of Des Moines frontman Nate Fetus’s long-running string of extreme musical acts, dating back to his Haunted Basement days.

Fronting what is easily one of Central Iowa’s best bar bands, Jim Enos leaves an impression with his remarkable baritone blues vocal chops and his willingness to open up about his personal story. The sturdy pocket playing of the Goosebumps is the perfect accompaniment to a singer who truly embodies and celebrates the expressive power of music.

Dan is on a major career upswing right now on the strength of his powerful and dynamic original tunes, which conjure the bracing narrative touch of Bruce Springsteen or John Prine. He backs up his lyrical chops with a convicted presence that makes each song register dramatically. He  also recently self-produced a documentary about the underground touring circuit, a subject he certainly knows from the inside.

River Getaway in Bentonsport | Kayaking, Canoeing and Other Summery Sports