In the Figge Museum’s Message in a Bottle Collection, specially constructed boxes display the bottles, and a map shows where they were found.

In 1560, Queen Elizabeth I created the official position of “Uncorker of Ocean Bottles” to ensure that naval secrets sent through the ocean’s currents were not seen by undeserving eyes. She meant business. Any man, woman, or child caught opening a message from the sea was risking life and limb. Literally. Ew.

Chad Pregracke, by pure happenstance, is a modern-day finder of secrets gone adrift. In this age, capital punishment no longer applies for the uncorking of bottled messages, thank goodness, because Chad has found, read, and safeguarded scores of them over the past few decades.

Chad grew up working on the waters of the Mississippi River as a shell diver, commercial fisherman, and barge hand. As a teen he became well acquainted with the ailing health of the river, specifically how much human trash it had been forced to consume.

In 1997, after a repeated stream of “sorry, can’t help you” responses from various Illinois government entities, Chad took it upon himself to start cleaning up his dear Mississippi. “There’s no blame there,” he says. “They didn’t know the extent of the problem, they didn’t know who I was and how serious I was. . . . But I knew it needed to be done.” 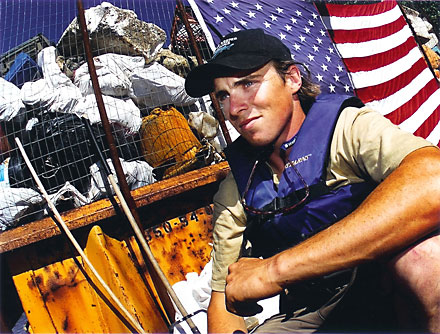 Chad Pregracke has collected over 9 million pounds of trash from our waterways.

You gotta start with what you have, and even though all he had was a flat-bottom boat and a dog, Chad got moving. His parents’ backyard became a staging area for trash, large and small, that he began pulling out of the water. He loved the work; it was satisfying. He could look at the pile he pulled out of the river and see a fine day’s efforts. He could look back at the river and see it was more beautiful. But it was slow going.

He needed help. Inspired by a NASCAR race he watched in college, Chad had the idea to seek corporate support for his efforts, and began calling large industrial companies in the area. “One of the first ones I called was ALCOA . . . because they were one of the biggest polluters, and they started with an A,” Chad says. He got a meeting with the company’s vice president, who was appalled by the pictures Chad showed him of the river garbage. At last, Chad’s S.O.S. was answered. With ALCOA’s sponsorship, Chad went back to work and removed 45,000 pounds of refuse that season from the Quad Cities’ river waters.

After working his entire adult life removing—and cataloging in great detail—trash from the river, Chad Pregracke and his crews have stumbled on some pretty bizarre trappings. Moneybags (empty, of course) and a video surveillance tape from a bank robbery found downriver from St. Paul are among the weirdest. A live mortar shell from a Civil War-era canon (I kid you not) nearly put the crew in harm’s way. But the sheer numbers of the stuff they’ve dredged from the water is incredible—and incredibly depressing: 1,000 refrigerators, 5,000 55-gallon barrels, over 100,000 rubber tires—the list goes on and on. “You never quite know what you’re gonna find,” Chad says.

Nevertheless, he probably didn’t expect to find a fascinating collection of written messages. 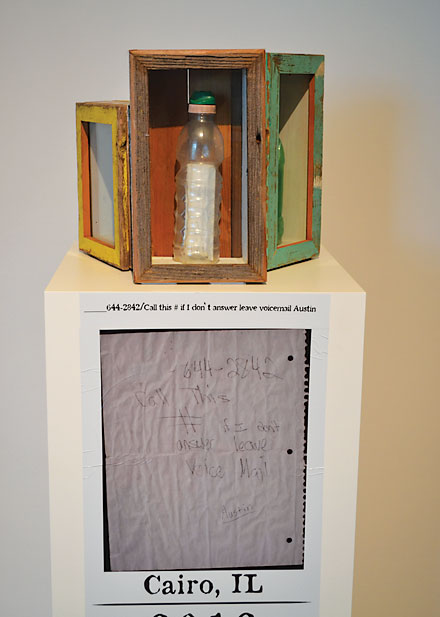 Some of the bottles on display are classified according to where they were found.

Secrets from the Deep

A rolled-up letter in a bottle is something most of us learned about from a Warner Brothers cartoon, a Dickens novel, or a song by the Police, but the tradition of these floating capsules goes back thousands of years and crosses many cultures. A bottled message has been—and apparently still is—a call for help, a quest for love, or a scientific experiment. A desperate prayer, a tawdry secret, a cry, a goodbye.

Now on exhibit at the Figge Art Museum in Davenport is an assemblage of Pregracke’s most precious finds: Message in a Bottle Collection. Of the 80 or so Chad has on hand, about 50 bottles were chosen for display, pulled from rivers in Iowa, Illinois, Missouri, Pennsylvania, Louisiana, Kentucky, and the D.C. area.

Chad laments, “There are a lot of them that have, unfortunately, been lost over the years.” He explains, “My houseboat sank a couple different times—and that’s where I was storing them. . . . Still, it’s one of the largest collections in the world.” And perhaps one of the strangest.

Is Anyone Out There?

Upon viewing the collection, I was first struck by how many bottle tossers had cast their message to the river as a simple experiment. Human curiosity had compelled young school children, teens, and seemingly normal adults to toss a bottle in the water just to see if someone would ever find it. How quickly would it be discovered? How far would it travel? The notes inside these bottles were some variation of “Hello, my name is (X). If you find this bottle, call me at (Y), or send me a letter at (Z).” A girl named Krissy considerately included a dollar for her finder’s postage.

Some even attempted a chain letter of sorts. One tattered note included separate scribblings from a handful of people—each had presumably found the note, read it, and added their own names and messages before throwing it back to the waves. Another kid attempted something similar, and his innocent script had me in stitches: “Put this boat in a different river and make your own note. If you find it tell the news.” No name, no date. Just “tell the news.”

But some of Chad’s finds will just about break your heart. A couple phrases stick in my head, like “Give up life, love, blood, and soul it does not belong to you,” and “I feel like dying . . . you might be the one who will help me.”

Others offer hope. “If it weren’t for me meeting Tommy, I would probably still be living life in hell. I pray that he’ll be mine forever.” And some are even a blessing. “If you ever retrieve this bottle know that this message is for you. I love you.” Let that one sink in, if you can.

The bottles contain human ashes, voodoo hexes, Bible pages, and obituary poems. Letters of forgiveness, treasure maps, and love songs. It’s truly a moving and intimate experience, like none I’ve had before at an art museum. Chad says it perfectly in his collector’s statement: “Hidden within are all the diversity, goofiness, spirituality, perplexity, and darkness ever stamped upon the human heart.”

He adds, “Human voices haunt and inspire the collection,” which remains at the Figge through September 17.

When you are done being haunted and ready to be inspired again, remember the resilience that also runs in our veins. Just look at Chad. He deserves a major award for the good works his nonprofit is doing. Oh, wait. He got one. Just a little ol’ thing called the CNN Hero of the Year award. Despite his many well-earned awards and accolades, this Quad Cities native swears he’s just an “average type of guy.” No different than you or me. He just happens to be persistent.

If you see a task at hand but feel overwhelmed because it feels much bigger than you can hold, take a look at LivingLandsandWaters.org. Ten minutes is all you’ll need. You will find no shortage of inspiration and motivation as you view the photographic timeline of Chad Pregracke’s work and life on the river. The only shortage you’ll find will be a shortage of Kleenex. Wipe your eyes, blow your nose, and take one step forward. Even if all you have is a dog and a boat. (Bring some paper and a bottle just in case.)