The Hub’s interior is spacious, stylish, and inviting. (Photos by Dan Schwalm)

When I was in downtown Ottumwa recently, in search of coffee, I was told there was a new coffeehouse inside the old YWCA. I was skeptical, as 1) I thought the building was condemned and slated for demolition, and 2) quality espresso is a rare commodity in this region.

I was mistaken on both accounts. When I walked in to the tan brick outpost on the corner of 2nd and Washington, I was gobsmacked by what I found. The coffeehouse, called the Hub, is so urban chic you would think you were in, say, Chicago or Seattle, not Southeast Iowa.

I grew up in Ottumwa in the ’60s and used to take dance lessons at the YWCA. I remembered it as being slightly dark and dingy, with yellowing walls and bad lighting. Which is why it was such a shock to find the first floor had been opened up into a light and airy space with polished concrete floors, exposed brick walls, tall arched windows, beam ceilings, and a glass and rock fireplace in the center of it all. My jaw had already dropped—and I hadn’t even tasted the coffee yet.

The space is filled, in a Zen-like sparsity, with sleek, contemporary furniture artfully arranged in groupings—spacious all-white booths, tables by the big windows (where customers with laptops gravitate), high-backed armchairs by the fireplace, velvet loveseats intimately arranged around coffee tables, and pounded copper lampshades hanging overhead. 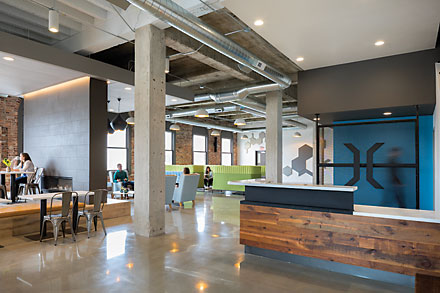 “This is so sophisticated,” I kept thinking. “What is this doing here, in Iowa?” It was hipper than most places I’ve seen in Des Moines.

My question was answered when I approached the coffee bar, an oversized kiosk dominated by a chrome espresso machine.

Beth Dierking, manager of The Hub, noticed my awe and said, “A lot of people have that reaction when they come in.” She explained that the building was bought by a church called The Bridge to create a community center—not just for the church, but for the entire community. Religious undertones aside, this struck me as an admirable all-inclusive attitude in today’s divisive world. They could have built a new building, and had raised the funds to do so, but they saved the old Y as a way to contribute to the gentrification of Ottumwa’s downtown, because it fit with the church’s mission to “rebuild, repair, and restore.” It was designed by a local architect, and the interior design firm Studio BRiNK in Omaha was responsible for the finishes, fixtures, casework, and furniture. 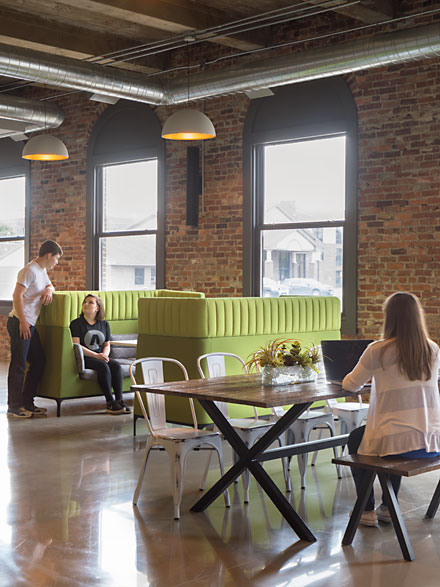 Comfortable and inviting seating areas are sprinkled throughout. (Photos by Dan Schwalm)

Beth wanted to talk about the coffee she was brewing. She pushed a cup toward me. “Taste this and tell me what you think.”

I swirled it around on my tongue. “South America?” I asked.

I learned from talking with her—and later with Kerry Van Hemert, executive director of operations and fellow coffee aficionado—that educating customers is a big goal. “People are used to big drinks and burnt-tasting coffee,” Kerry said, referring to the Starbucks inside HyVee. “We want to show another side of coffee that’s more flavorful and lighter. Coffee beans themselves are vastly different, depending on their origin.”

“We want people to try the coffee first, before adding milk and sugar,” Beth added.

They buy their beans from Messenger Coffee, a fair-trade, artisanal roaster in Kansas City, and send 10 percent of their proceeds directly to the coffee farm of their choice.

I asked about a book on the counter—The Blue Bottle Craft of Coffee—by the celebrated roastery in San Francisco.

“We studied that book,” Beth said. “We did extensive research to hone our skills.” That these baristas take their drinks seriously is apparent, from the leaf designs on the lattes to the brewed coffees and teas delivered to your table on stylish wood boards.

As for the bubble tea, after I asked if anyone ever ordered it since it didn’t seem to fit Ottumwa’s demographic, Beth said it was becoming popular through word of mouth. “I lived in Cambodia for two years. That’s where I learned about it, and I wanted to bring it here. We make it with fruit-flavored black tea and agar boba [clear tapioca pearls]. And we have a special machine for sealing the lids onto the cups.” She demonstrated with a full cup of water, turning it upside once it was sealed, proving that you would never spill in your car again. “We also use it for iced lattes and other cold drinks.” 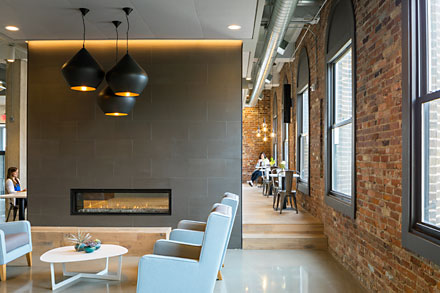 Because I was still gushing over the building’s extreme makeover, Beth offered me a tour. “Hearing everyone’s memories is one of the charming things about using this building,” she said. “So many people say they learned to swim here.” The swimming pool, however, is now a state-of-the-art 400-seat auditorium. The rest of the building is still undergoing renovation in phases, with the gymnasium to be completed next, by September. The second floor, where I had my dance lessons, will eventually be turned into activity rooms for youth groups, meeting spaces for small groups, and for child care. The third floor will be used for the church’s offices.

Beth’s third-floor tour included picking up a sledgehammer to whack at the brick and plaster walls being removed to make way for the new open floor plan. I took a few swings and it was excellent therapy, especially during this tumultuous political time. Blow by blow, with volunteers pitching in (even coffee customers like me), the demolition will eventually end so the rest of the rebuilding can begin.

I asked Main Street Ottumwa’s executive director, Fred Zesiger, what he thought of The Hub.

“Anytime you have a community gathering space it’s fantastic, especially if it’s downtown,” he said. “It’s nice how the building has circled back to its original intent as a gathering space for young women, but now it’s for the whole community. I’m excited for them and for Ottumwa as I think it will spur more development.”

I asked Kerry if any part of the building could be rented for events. The ground floor is such an obvious venue for a party or reception, I’m sure I’m not the first or last to ask. “No,” he said, but longer term they may open it up to community classes.

It’s a toss up as to which is more impressive, the YWCA’s new chic design or the third wave coffee, but all combined makes a trip to The Hub well worth the drive, even if, like me, you live over an hour away.