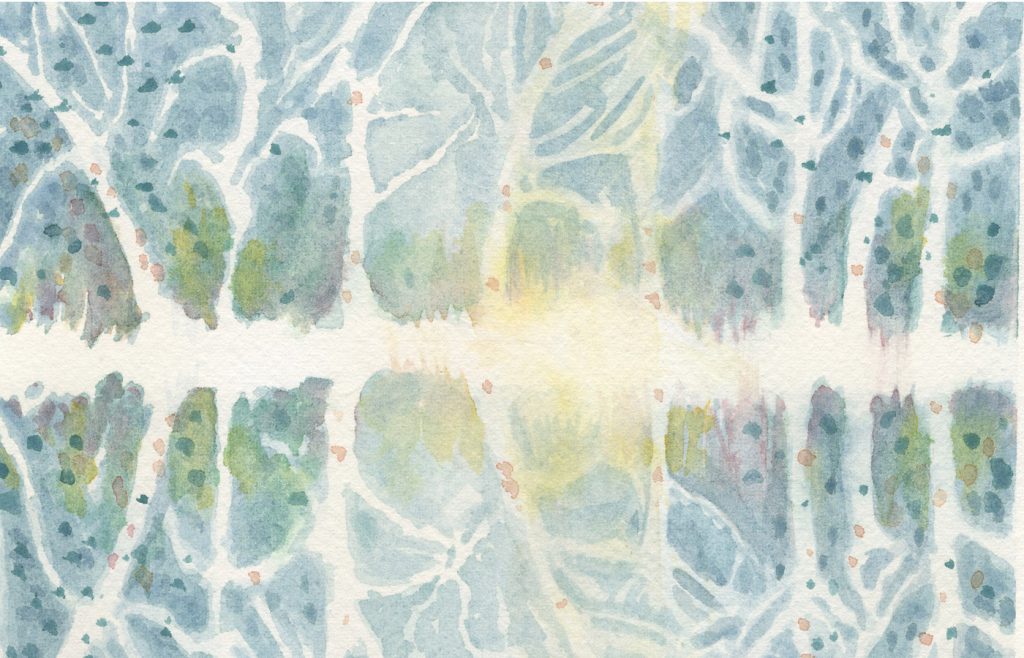 Below, the water is a sky so blue

unmoored from the sumac, buoyed

by the pure float of cumulus.

Above, the same exuberance of white

and blue, but without the scarlet gash

of her body, empty as an autumn pod,

and the dock some poet has lashed it to.

Across the lake, the dark brush and trees

rise from their reflections, grounded

both to the hidden earth and to radiant

ideas of themselves, almost perfectly true.

Near the far shore the lake

flattens out. The cottonwoods

stand in the sun on their own

But in the center some

of an old mirror.

And from that troubling

in stretched puffs of gray

as from a pipe.

The red canoe is tied up,

against the soft wash,

a statement of pure fact.

The Red Canoe Dreams of Spring

On a frozen lake, there can be no reflection,

no meeting of minds between earth and sky.

The snow on the ice may shimmer

under the light of the moon, but Heaven

is no closer, cannot marry the Earth.

The red canoe is lonely at the ice-edge.

She longs for the spring softening, the limber

dip and roll, when the body of water takes

the moon’s form into its bed, eases her

from the rarity of space to the common

tenderness of thaw, and mingles with her

in the shimmer and motion of love.

She dozes and dreams she is the moon,

Then she dreams herself skidding

headlong down the sky onto the ice.

She does not break. The lake goes soft,

takes her into its heart, strokes her,

rocks her in its arms. She feels

her blood heat up and move in her.

Jeanne Emmons was born in Louisiana, received her Ph.D. in English from the University of Texas, and currently lives and teaches in South Dakota. Her work has appeared in literary journals such as Alaska Quarterly Review, American Scholar, Prairie Schooner, and New Orleans Review. Her poetry has won numerous awards, including the James Hearst Poetry Prize for 2006. She is poetry editor of the Briar Cliff Review and lives in McCook Lake, South Dakota.

A Platitude on Gratitude: The Catitude Who Changed My Attitude