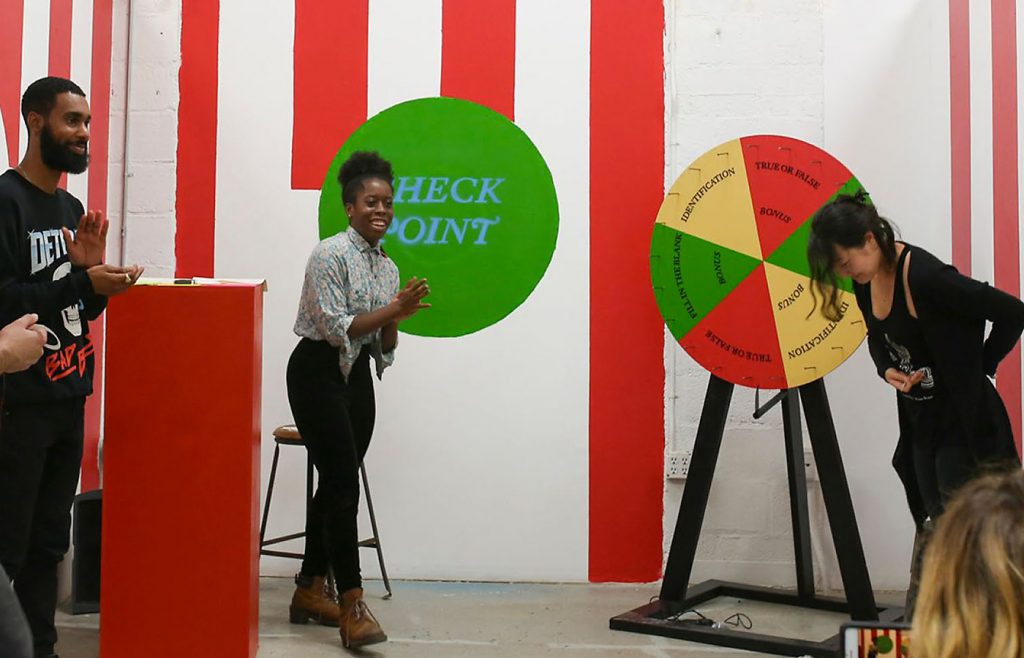 Public Space One (PS1), presents their final exhibition of the spring, an immersive and performative installation titled Check Point: an Introduction to Child’s Play, by Chelsea A. Flowers, opening at 6 p.m. on Friday, June 1.

The PS1 opening coincides with the Downtown Iowa City Gallery Walk, a fun, self-guided tour of 16 different venues that happens between 5 and 9 p.m. on Friday night. It’s the beginning of the Iowa Arts Festival in Iowa City!

Detroit-based artist Chelsea A. Flowers uses art to subvert popular culture and to examine how “otherness” is created. She takes a fresh look at these ideas through comedic troupes, physical play, nostalgic memorabilia, and participatory performance. In Check Point, she has created a game that tests social, cultural, and emotional knowledge, and seeks to answer the question, “Can we build communities through play?” The game asks questions like, “Did O.J. do it?” “What day did Beyonce turn Black?” “Can you walk like an Egyptian?” and “Can you list seven young men and/or women who were murdered by police in the past four years?”

Three audience members will be asked to compete in Check Point. Based on the idea that communities are created by what we share and how we care for each another, participants will be able to show their care through play (verbal discussion), dance (intellectual conversation with one’s body), and investigation (openness to learning).

“I think that cultural misunderstandings are happening due to the lack of individuals ‘seeing’ and acknowledging what they ‘see,’ ” said Flowers in an interview with Kate Mothes on Young Space.com. “I am working to figure out how my physicality can have visibility. . . . I have been endeavoring in this inquiry and my response to this question has been to undertake performance. Specifically stand up comedy to address these issues.”

The PS1 installation also contains art objects and educational components. The game show/performance will begin at 6 p.m., with Flowers acting as host and performer. The exhibition will run through the month of June.

Featured Poem: "Finding the Language: Morning on the Outer Banks"