When I was in my early twenties, my fellow students and I feverishly employed ourselves to the production of a campus literary magazine. We were fuelled by visits from poets like Robert Bly, Marvin Bell, and John Logan who came to read to us in the campus lecture hall. Especially mesmerizing was Robert Bly, whose journal The Seventies introduced our young minds to translations of poets like Rilke and Tomas Transtromer. Especially popular were the translations from the Spanish: Fredrico Garcia Lorca, Cesar Vallejo, Pablo Neruda, and Blas de Otero. What excited us about the poems from the Spanish? Bly said, “We accept tons of dull poetry, and no one looks for an explanation of why it is dull.” The poets translated from Spanish were not dull. They, in Bly’s words, “loved the new paths of association” and their leaps were the fuel that we as young poets adored and consumed like addicts.

In a similar vein, now that I’m slightly older, I have been enthusiastically revitalized by the recent encounter with the poetry of José Manual Cardona, masterfully translated by his daughter, poet Hélène Cardona. 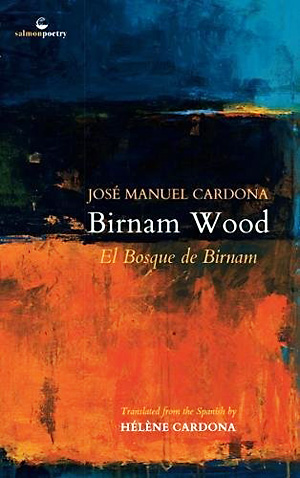 José Manuel Cardona is a poet, writer, and translator from Ibiza, Spain. The Franco regime forced him into exile in France. This exile informs much of the spirit in this book. The original Spanish language is printed face to face with Hélène Cardona’s English translations. In her hands, El Bosque de Birnam (Consell Insular d’Elvissa, 2007) or in English, Birnam Wood (Salmon Poetry, 2018) sings to us in a rendering that is lush and passionate.

My favorites in the book are the Poems to Circe, where the young exiled poet, full of passion and longing, envisions himself as a modern Odysseus, swayed by his personal enchantress, at once person and country, who is seen everywhere, in the sea, in the sky, and on the earth. In years, I have not read a poetry more expansive, gripping, and beautiful for the true music of language.

I open my blood in love

and offer it to you.

I am amazed every day by the roaring

Here I present “Poem to Circe XIX” as a sample:

I did not come to put things in order,

Nor will I spend much time among you.

The foreigner knows that the land

He most loves is not his and he remains

When it’s time to leave,

When the wind raises its moorings

And the rigging is wrapped with the mysterious

Smoke of dawn and the fish

Slime is soft in the grotto

Where we sacrifice to the gods,

When you do not see me among you,

Abandon my name to oblivion.

I leave you nothing and I take nothing

With me. There are no anchors or banners

To commemorate my tenure.

Only the long knife of the stars

In the night’s open eyes.

I haven’t come to sow in your fields

Nor do I think of collecting for winter.

I have been with you, that’s all.

Circe knows what stars, what storms,

What millennial moons brought me.

I know the signs ruling exile

And death and abandon myself

To a dark honey blood.

I am iconoclastic and break idols.

I affirm and deny with the same force.

Those who know me know the fire

In my decisions, what brutal force

Accompanies my laughter, what madness

Has bitten my chest and the black

Mastiffs barking on my heart.

–It was just a man who knew himself

A man inside and out. A Stranger

Who arrived, saw and loved. The humble

Adopted him a citizen of the island.

A man bound with human skin.

–And he is still alive and remembers you.