You might think that graphic novels are only for superhero fans. But this month, we take a look at an exciting new graphic novel about a giant of jazz.

In his first book in English, Youssef Daoudi, a graphic novelist born in Morocco and living in France, explores the life and career of jazz master Thelonious Monk. Daoudi highlights Monk’s relationship with Kathleen Annie Pannonica Rothchild in Monk!: Thelonious, Pannonica, and the Friendship Behind a Musical Revolution.

In the afterword to the book, Daoudi explains the importance of jazz in his life: “Jazz has saved my life, or at least, my sanity,” he writes. “The very fact that some cats could produce such dazzling music gave me hope for humanity. One of the most beautiful examples of that is the work and life of Thelonious Sphere Monk.” 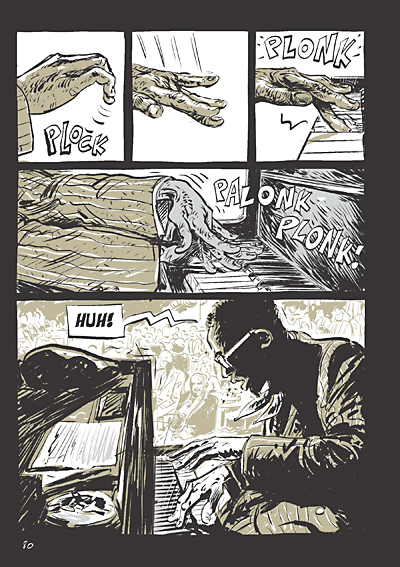 Monk was at the forefront of the bebop movement in jazz, composing and playing music unlike anything that had come before. Daoudi is at pains to explain these innovations, and that occasionally leads to stilted dialogue. Here, a musician listening to Monk in a club describes his playing style to a companion:

“That’s right. He hits the keys with fingers almost as still as vibe sticks and holds his free fingers high above the keys. Because his right elbow fans outward away from his body, he often hits the keys at an angle rather than in parallel. Sometimes he hits a single key with more than one finger, and divides single-line melodies between his two hands.”

The artistic style, which often seems to sizzle with the energy of improvisation, makes up for any weaknesses in the text. Daoudi has a gift for visual jokes as well as a knack for creating passages that seem to build in the way of a good jazz solo. For example, Monk muses on the “self-induced altered state” of improvisation. The conversation segues to a consideration of Monk’s mental health struggles, including mood swing. That in turn leads to a look at swing as a musical concept.

At book’s end, Daoudi includes a bibliography and a playlist of Monk’s music. For those unfamiliar with Monk, I’d recommend doing some listening before sitting down with Monk! For those who are already fans, this graphic exploration of the man and his music is appropriately and satisfyingly off-kilter and engaging.