Regular readers may remember the story of the Writing Lads, a writing group formed by the late Lennox Randon that included me and Dennis Green. This month, as I continue my series on Iowa’s indie authors, I’m pleased to share the news that the third volume of Green’s Traveler series, Traitor, has been released. I have been honored to watch this series come to fruition and, though I will admit to some bias in this case, I heartily recommend this science fiction trilogy that frequently acknowledges its influences while also offering something as original as it is enjoyable and engaging.

Rob Cline: We should start with an introduction to the Trav-verse. What is your trilogy about and what’s at stake in the new book?

Dennis Green: Traveler is the story of Trav Becker, a police detective who finds himself slipping in between parallel realities and soon discovers that another version of him is killing every Trav Becker he can find. Trav must catch someone who is not only trying to kill him but has already succeeded. Along the way, we get to know Trav’s best friend, Sam, a physicist whose work is somehow connected to Trav’s situation, Trav’s girlfriend Mary, Eastern European crime boss Anton Kaaro, and a mysterious psychic named Morgan.

In Prisoner, the second book of the trilogy, we also meet a young girl named Sophie, who plays a pivotal role in the concluding book in the trilogy, Traitor.

You wrote the first two books under the heavy influence of the other Writing Lads—including our late friend Lennox Randon. What was different about writing this third installment? Were there any passages that you thought Randon would have particularly responded to or would have had questions about? Are there portions of the book that you think of as homages to Randon? 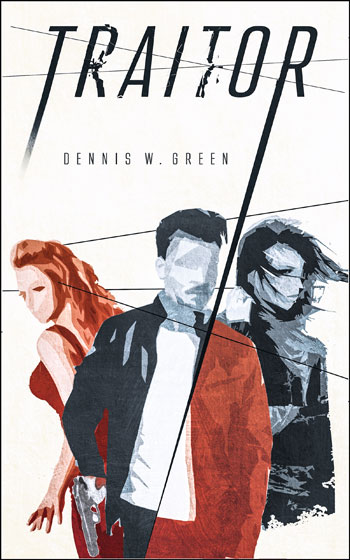 In the dedication to Traitor, I say to Randon, “This would have been a lot easier if you had been around to help.” As you know, that is 100 percent true! It was so much easier to write when the three of us were meeting each week. In many ways, I wrote the first two books for the two of you. I’d often end a scene or chapter with a cliffhanger and think, “That is a good place to leave Rob and Randon hanging until next week!”

Not having that weekly feedback made the third book much harder to write. And not having the weekly deadline was even worse! Which was one of the reasons this book took nearly five years to write, instead of two.

I missed Randon each time I sat down to write. I especially wished I could have had his help writing the fight scenes. Randon was the only Writing Lad with actual fighting and self-defense training. I know his insights would have made them better.

Of course, my biggest regret is that Randon didn’t live long enough to read the end of the book. He would often say to me, “You need to finish the story before I croak.” I wish I had.

Morgan’s cat, Noah, is named for the protagonist in Randon’s first book, Friends Dogs Bullets Lovers. And Randon himself makes a cameo (as does Rob Cline) portraying a police officer, which was one of Randon’s many actual careers.

You went with a small publisher for your first book and have since moved to indie publishing. What would you say are the pros and cons of those two approaches?

I considered myself very lucky to meet Karen Matibe, who at the time was running Mbedzi Publishing. There are few feelings as good as sending your book to a publisher, even a small one, and receiving an email that says, “I love this! I want to publish it!”

Most everything I learned about the book business I learned from Karen. She lined me up with an editor, a book designer, a cover designer, and gave me valuable feedback herself. But as we all know, the book business is a tough gig. Karen shuttered her imprint to move with her husband to Botswana. Which also could have been a nightmare. So many writers lose the rights to their work when their publisher closes. Fortunately, Karen made sure the rights reverted to me, and even provided me with the book files. This made it so much easier for me to re-publish under my own imprint.

As far as being an independently published author goes, I love being able to control every aspect of the process—cover design, book design, everything. The downside is that it also means I’m responsible for each minute detail. Oh, the typos. Every time I think the manuscript is clean, I find a few more.

Another downside is that it is so hard to get noticed when you’re one of 20 million titles on Amazon.

You’re a voracious reader and I’m interested in who you would say your main influences have been as you’ve been writing this series. What about television and movies that have influenced your work?

So many things in my books are an homage to something else I’ve loved. The first-person narrative style in the Traveler books has reminded a number of people of Jim Butcher’s wizard for hire, Harry Dresden. I’ve been a Butcher fan for decades, so that’s a pretty good observation. Roger Zelazny’s Amber series, which also does parallel realities but in a much different way, was definitely an inspiration piece as well. In Traitor, there is a big fight scene where Trav takes on a literal army of Trav Beckers on a staircase. This is my version of the famous hallway fight in Netflix’s Daredevil.

And the books are a literal fountain of Easter eggs and tributes to the books and movies that have inspired me. Star Trek, Star Wars, Lord of the Rings, Terminator, Ghostbusters. Robert Heinlein gets a mention. And of course Buckaroo Banzai.

And area readers might spot some familiar settings—and even people, right?

Even though the Traveler books are sci-fi, one of the most fun parts was setting them in “real” Corridor locations. Building 231, where Sam’s office and lab are, is a re-skinned version of Van Allen Hall at the UI, right down to the observatory on the roof. There’s a scene in Traitor where Sam and Trav take a homemade laser to the roof and make red dots appear on the sidewalk in front of a downtown bar. Some college friends of mine actually did that.

Much of the action in the books takes place in a recently gentrified industrial area dubbed the District. This of course is inspired by Cedar Rapids’ NewBo neighborhood. In a funny case of life imitating art, the people in charge have also now dubbed this area (including nearby Czech Village) the District, five years after I coined the name in Prisoner!

Residents of Cedar Rapids and Iowa City will recognize other thinly disguised landmarks in the series, including the Geonetric building, the Paramount Theatre, and others.

I also want to recognize my friend and cover designer Drew Morton, well known in the local music community as a jazz bassist and member of groups like Christopher’s Very Happy. Band., Jack Lion, and Koplant No. The jazz trio that pops in and out of view in Traitor consists of Drew, plus pianist Jon Snell and drummer Chris Jensen, both of whom are enthusiastic Traveler fans. When I told Jon I had put him and Chris together with Drew, he decided to actually book that trio for some gigs! Trumpeter and composer Al Naylor, my jazz mentor, also makes a cameo.

You’ve kicked around a few ideas for your next writing project. Any firm idea what you might jump into next?

I think my next project will be a comic spy thriller, but one with a different protagonist than you’d expect. The hero runs a barely-making-it theater and mistakenly receives a government “grant” of 20 million dollars that should have gone to a black-budget intelligence operation. Much hilarity and confusion of identities ensue.