My great-great-grandpa John Love served as a Union cavalry soldier in the Civil War. Even though Grandpa Love’s grave is prominently marked in a family cemetery, I grew up knowing nothing about him.

The internet changed that, and now my family is fascinated by the history. And for me, at least, that history has shed light onto my personal journey, one that has included struggles with self-doubt in my work for social justice.

I recently researched Grandpa Love’s military buddies. Like myself at their age, they were all farm boys from rural Keokuk County, Iowa. It wasn’t hard to find their graves, sitting quietly along dusty gravel roads.

I decided to visit their memorials that have always been in my midst.

I discovered that the soldiers were mostly first-generation immigrants with surnames from Ireland, England, and Germany: the Donnell brothers, Hawk, Hogue, and Mallonee, to name a few. As a veteran myself, I can picture them standing together in a company formation or a chow line, just as I had countless times. I wonder how they maintained their uniforms and kept gear clean. I also consider whether they resented orders and menial duties, or worried about their families left at the northern end of their endless movement southward—and the scars that remained after they returned home.

Could visiting their graves help me understand my personal path, and the scars caused from my figurative battles for justice?

Unlike Grandpa Love, I was an officer and Army attorney. Soldiers called me sir, even though most had more seniority and skill. In return, I took my duty as a military criminal defense counsel very seriously. At its core, my job meant protecting the liberty of my clients, but it also included protecting their military legacy and honor. And the dignity of the process.

My military clients loved me . . . because I loved them. Their appreciation was the only decoration I cared to earn. I certainly wasn’t going to receive glowing accolades from the bureaucratic generals I fought against.

Since my military years, I’ve continued working for people facing the overwhelming strength of the state. My clients today are mostly poor and have some form of addiction or mental illness. Since I don’t represent the powerful, I am routinely treated unprofessionally and marginalized within my profession. Sometimes I wonder whether fighting the fight is worth the toll.

Constant exposure to social injustice has made me sensitive. Like many others, I react with nausea at videos of police officers murdering men like George Floyd. I cannot help but think that Grandpa Love and his Union buddies would have mounted their horses and stormed the Minneapolis police station in a rage. I imagine their war cries, echoing the voices of current protestors, “We fought the war to end slavery and lynching. Black Lives Matter!” My mind wanders with the glory of swinging swords. 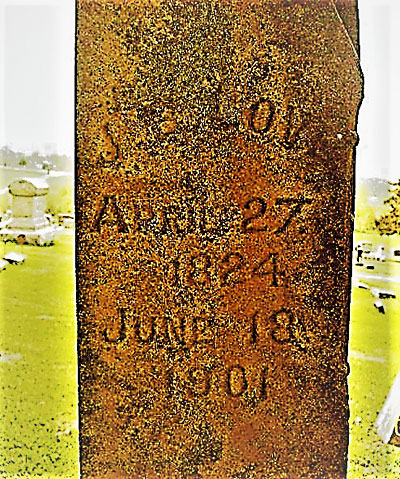 Then I feel conflicted—not about police brutality but about how history views Confederates from the Civil War. It doesn’t seem like a simple thing. By visiting the graves of Grandpa Love’s military buddies, aren’t I simply honoring local heroes? Aren’t I using their history to put the events of my own life into context? Couldn’t the same be said about our Southern friends who see monuments as their way of honoring the heroes of their local history?

On the other hand, shouldn’t I feel disgust at the overt, ongoing, and public disrespect caused by these monuments? Their monuments.

I shared my feelings with my wife. I reasoned, were Robert E. Lee and Ulysses S. Grant mutually exclusive? Could Grant have fought to end slavery if there was no Lee? Could Lincoln have ended slavery with stern pronouncements to plantation owners? No, I argued.

Blood had to be shed! I argued. To end slavery, there had to be a yin and yang. And Lee ensured that a conflict would happen. Right? Yes?! I intellectualized that the monuments should stand. “Don’t knock down Grandpa Love’s headstone, either! Or else I’ll . . .” Swords were swinging and piercing wildly in front of my mind’s eye.

As in most debates with my wife, she coolly told me I was wrong. Even though Lee was a famous historical figure, he didn’t deserve public monuments, and he himself warned against glamorizing the Southern cause. Confederate statues and flags only symbolize hatred to many Americans. The Civil War should symbolize the end slavery’s injustices, not the continuation of intimidation and social terrorism.

My philosophical position was blown to bits by a howitzer’s blast of truth—clearing my mind of that grotesque logic argued by many others. My sword was placed back in its sheath.

I wonder what Grandpa Love would say. I presume he would remind me that racism is a projection of fear and insecurity, and that it is best to honor the protestors who have the courage to speak out publicly about the institutionalized murder of Black Americans. That Black Lives Matter. I hope he would.

I will listen closely when visiting my local heroes, and Grandpa Love. Perhaps I will hear echoes of dissent in the wind. Or cries against the monuments of hate.

Championing Factual News: A Vote for the "Lamestream Media"

Mason City's Prairie Gems ... and How Australians Found Them