Completing a long, demanding assignment in the Kalahari Desert, wildlife documentary filmmaker Craig Foster returns home to Capetown, South Africa, feeling exhausted, drained, and disconnected. He retreats to the magical tidal pools of his childhood on the stormy Atlantic coast. Diving into the frigid water, he navigates the tall kelp of the Great African Sea Forest, which Foster describes as one of the greatest unspoiled ecosystems. And which inspired him to launch the Sea Change Project, to safeguard the planet’s natural habitats. My Octopus Teacher is a true story about Craig Foster and how he was healed by the ocean and by a special creature that taught Foster that he too is part of the natural world.

A seasoned ocean diver since childhood, Foster decides to explore the underwater sea forest every day for a year, while capturing his daily adventures on camera. His endurance is mind boggling. With no wetsuit, he welcomes the stimulation of cold water that’s barely 50 degrees Fahrenheit. And free of the scuba tank, he learns to sustain long breaths. He’s joined by experts and filmmakers who record hundreds of hours below the surface to bring his experience to life. 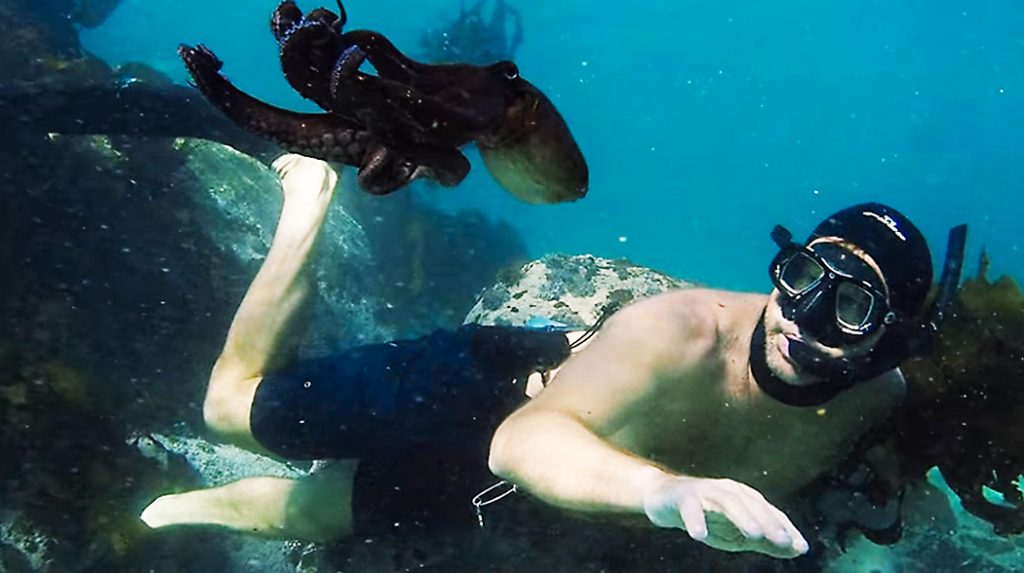 An encounter with a young octopus inspires a mutual curiosity. And eventually, the octopus lets Foster follow her around with his camera. We observe her ingenuity for hunting for food, and her innovative ways to avoid sharks and even escape them. As a soft, boneless, nutritional entrée, the octopus is the ocean predator’s snack of choice. Or as one researcher describes them, the protein bar of the sea.

Now we pause for a timeout, to grasp this unusual tale with its cast of two, in which a 50-year-old marine photographer establishes a relationship with an octopus. For those of us who have spent little time underwater holding hands with an octopus while its other tentacles are getting to know us better, this is a leap. We are unfamiliar with a shape-shifting animal that oozes out of a rock, whose eight tentacles are covered with suckers that don’t let go, and who might be wondering how we’d taste with a little Tabasco. Now that we’ve gotten that part out of the way, let’s see how this film carries us across the mental divide. 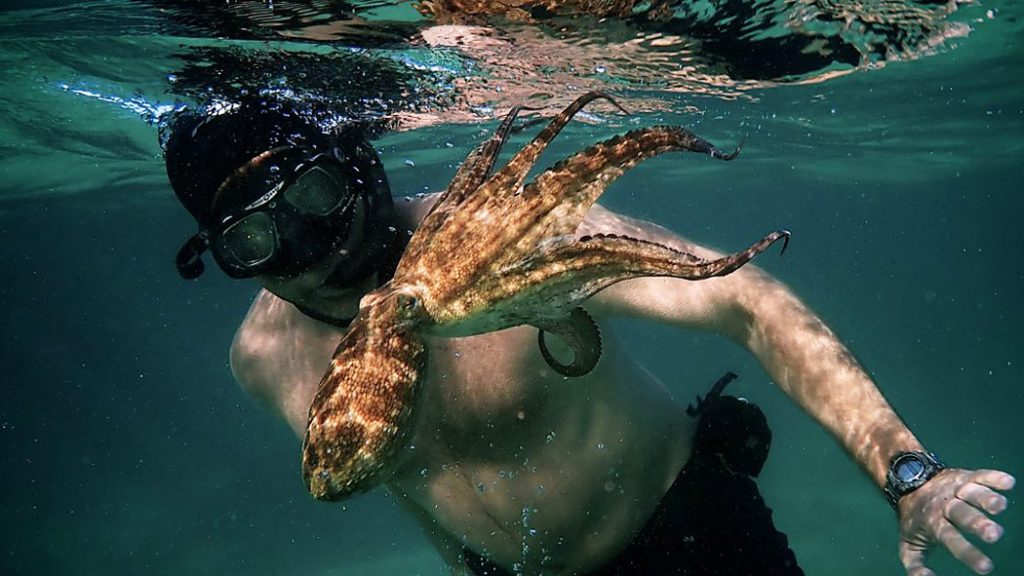 Craig Foster is our guide. His narration is instrumental in drawing us in, bringing us along, and putting us at ease. His observations and explanations help us understand who he is and how this encounter is changing him. And he reveals how bonding with a sea animal brings an awakening—which is just what the doctor ordered.

And there you have it. We let ourselves grow more comfortable. We observe the octopus’s behavior, we admire her skills. We witness qualities that seem human—her curiosity, her playfulness, and her ability to recognize and trust a human visitor. We get used to the way she’s in constant motion, which starts to look like a graceful dance. 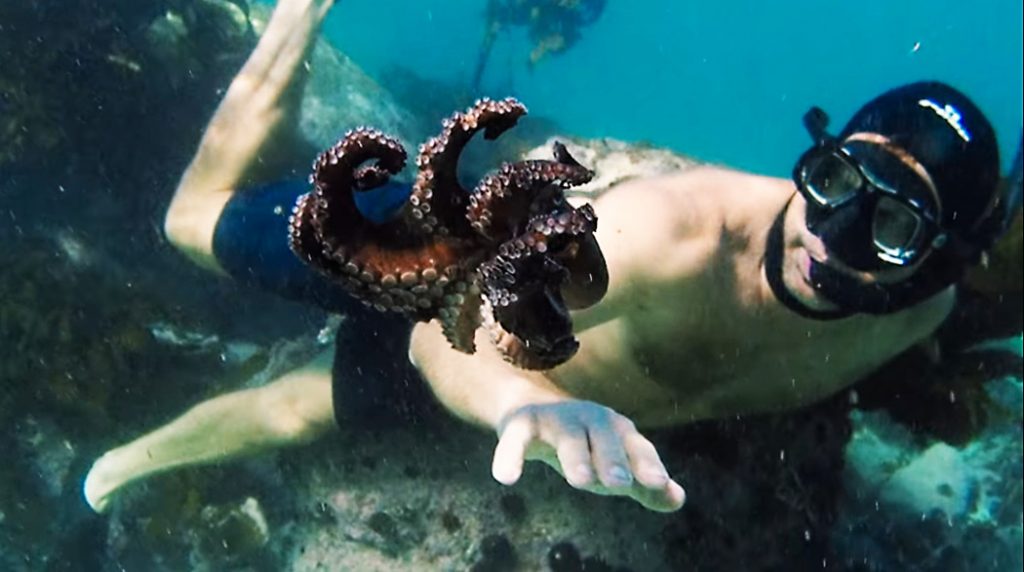 My Octopus Teacher is a slow-moving descent into a foreign underwater world, where two utterly different beings find common ground. And as we learn about the octopus, it’s hard to not be impressed, or be tempted to gather more information—which I’m now tossing into the mix.

This animal lineage of cephalopods dates back 300 million years, long before the dinosaurs or even the Mayflower. They’re presumed to be the planet’s original sea creatures, numbering 298 species. They have three hearts, blue blood, keen vision, a hidden beak that crushes prey, and the ability to regenerate body parts. They instantly change color and texture for camouflage, though they’re believed to be color blind. Their eight tentacles taste, touch, and smell, and each appendage can “think” and behave independently. They’re incredible problem solvers. And they come in different sizes. Of the Giant Pacific Octopus, the largest on record was 30 feet wide and weighed 600 pounds. That one would have taken us longer to get used to. 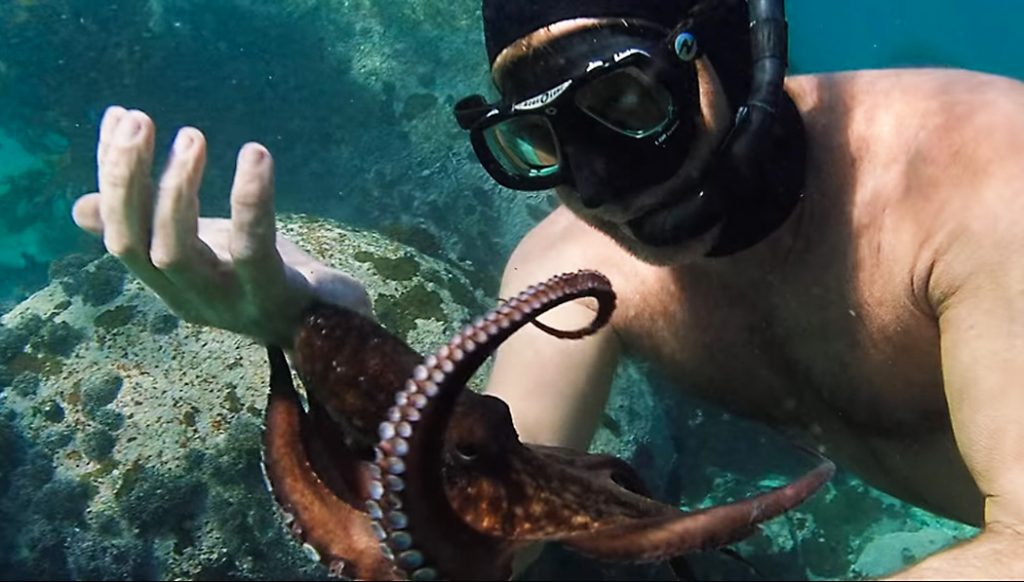 If you can downshift to the speed of a crawl, this quiet film offers a tender distraction from the terrible tensions of the world. And when it’s over, you might say aaaaah, or at least think it. You might also see the charm in befriending a sea animal, which, in most cases, is better left to the experts. Thank you for not trying this at home. B+

ICON Gallery's 2020 Biennial Auction: This Year It's Twice as Good

Honey, I Shrunk the Speakers! (And the Sound Suffered)