In my home, the Christmas music goes on as soon as the calendar hits November. Since I also love a good story, I decided to blend my two loves and search out the tales behind the carols. There are so many canonical Christmas songs that I couldn’t decide where to start, so I began by asking my mother.

“O Holy Night,” she answered. “But I don’t know. It may not have a very interesting history….”

Truly He taught us to love one another . . .
And in his name all oppression shall cease

Commissioned for and later banned by the Catholic Church, “O Holy Night” has a history worth sharing. In 1843 Placide Cappeau penned the poem “Minuit, chrétiens” (“Midnight, Christians”) at the behest of the parish priest of Roquemaure, France, who wished to commemorate a newly renovated church organ. The poem was so well liked that Cappeau asked his composer friend Adolphe Adam to put it to music. Adam did, and the carol “Cantique de Noël” was sung for the first time at Midnight Mass in 1847.

When it came out that Cappeau was an atheist and Adam was of Jewish descent, church leadership scrubbed the song from Catholic liturgy. But the people of France kept singing it, and a few years later, in 1855, “O Holy Night” debuted in the United States. John Sullivan Dwight—minister, music journalist, Transcendentalist, and abolitionist—was the translator. The song grew in popularity, and on December 24, 1906, “O Holy Night” became the first song to hit the airwaves when it was broadcast using novel technology and reached a handful of receivers on ships and in newspaper offices.

The story goes that the singing of “Cantique de Noël” by French soldiers on Christmas Eve of 1870 put a temporary stop to fighting during the Franco-Prussian War, and the two sides ceased fire to observe 24 hours of peace. It seems that “O Holy Night,” written as a song of equality and love for others, has lived up to its intent. My mother chose well!

I’ll Be Home for Christmas 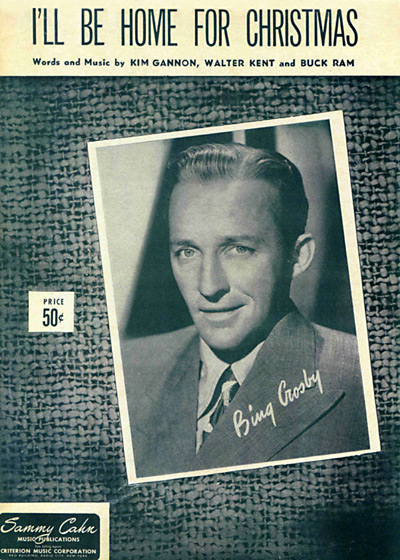 When I launched an online poll asking for Christmas carol favorites, “I’ll Be Home for Christmas” came up more than any other. Its history lends even more potency to its lyrics. Introduced in 1943 during World War II, this song was written and composed by Kim Gannon and Walter Kent to voice the thoughts of thousands of soldiers stationed overseas during their Christmas holiday.

At first no one in the music business wanted to record the song, because the last line was deemed too sad for soldiers and families separated by war. Eventually, Bing Crosby agreed to record it after Gannon sang it for him during a golf game. It became the most requested song at Christmas U.S.O. shows and today is a definite Christmas favorite.

Do You Hear What I Hear

“Do You Hear What I Hear” took me by surprise when it popped up in my song poll. I like the tune, but I had always assumed it was an old song written for the church. I was wrong!

“Do You Hear What I Hear” was written by Noël Regney and composed by Gloria Shayne in 1962, and it was written in reaction to the Cold War.

The opening line, “Said the night wind to the little lamb,” came to Regney while he was driving through New York City. Nuclear buildup between the United States and the Soviet Union had just escalated into the Cuban Missile Crisis, and that day the French-born Regney was thinking of his horrifying days as a drafted German soldier in World War II. Despairing at the thought of having to witness battle and death all over again, he looked out his car window to see two toddlers riding in strollers on the sidewalk. The two were happy and smiling, oblivious to nuclear threat. The sight brought the entire lyrics of “Do You Hear What I Hear” into being and gave hope to its author.

“Silent Night,” which was declared an intangible cultural heritage by UNESCO in 2011, is my personal favorite Christmas carol. At one time, people claimed the song was written by Haydn, Mozart, or Beethoven. But today it is known that Joseph Mohr, an assistant priest at St. Nicholas Church in Oberndorf, Austria, wrote the famous words after going for a late walk and taking in views of a small, still town slumbering in winter splendor. The Napoleonic Wars had just ended, and Mohr was struck by a sense of peace.

All is calm / all is bright

He asked Franz Xaver Gruber, the organist and choirmaster at St. Nicholas Church, to put his poem to music, and in 1818 the carol “Stille Nacht! Heilige Nacht” was performed at Christmas Eve mass for the first time ever.

I hope that when you turn on the Christmas music this year (if you haven’t already), this bit of history brings new depths to songs that, if you’re like me, you already know by heart. And I hope that you, as the old song goes, have yourself a merry little Christmas!