This upside-down year, for many, was a call to step back and take stock. As normal life ground down to a halt, some busy little bunnies on a farm just outside of Fairfield were building a hoop house.

When I spoke with her a few weeks ago, Chloe Hennesy, owner of Rocket Rabbit Flower Farm, was in the throes of planning—and planting—the second growing season on her new farm, and although her version of this article would have been a lot funnier had she written it herself, spare moments were in short supply for the once-upon-a-time Fairfield Ledger journalist. Chloe had hundreds of tulips to tend. And a team of teenagers to lovingly shout things at.

Mix infectious charisma, infinite curiosity, dogged determination, and wicked humor with a pair of overalls (probably purple), and that is Chloe Hennesy. This multi-talented mom (and my former third-grade classmate) had done something extraordinary during this horrible year and I wanted to hear more about it.

So. You started a business  during a pandemic.

“What were you thinking?” I asked Chloe, only half kidding.

“That is a great question,” she said after a deep belly laugh. “The plan actually happened in the fall of 2019. I had gone on a Vipassana retreat, a ten-day silent meditation course, and while I was in there, the idea for how much I love flowers was distilled down for me. I just thought, Oh. This is what I need to be doing, I need to start a flower farm.” The Buddhist term “vipassana” is most commonly translated as insight. I’d say she got her money’s worth.

“As soon as that realization came into being,” she continued, “honestly, things just fell into place. You know, in Fairfield people love to say ‘nature supports.’ And this was literally nature supports. Everything just sort of lined up for me. And I pursued it.”

Even though Chloe had worked with plants and flowers on and off for a couple decades, the cut-flower thing was a new angle for her and she wanted a solid start. “I took a flower course with Floret Farms, a small family farmer out of northern Washington.” How did she find them? “Instagram is owned by Facebook and has that algorithm that listens in to your conversations, so I must have said ‘flower farm flower farm flower farm’ enough times that it started showing me ads for this course.”

Lucky or creepy? “I had ten days to figure out where to get the money, if this was something I really wanted do, and if it was legit. But I looked it up, it was super legit.”

Floret Farms emphasizes being part of a smaller collective while working with uncommon and heirloom flowers, and its philosophy resonated with what Chloe was dreaming about. “I loved it,” she said.

The course wrapped up in March, and then the pandemic hit. “I pulled the kids outta school,” Chloe said, “and then I was, like, uhhhh, I guess I’m … starting a business??

“Like a lot of people, I had to do a hard pivot. I’m a process person, so my pivot was to build a greenhouse. Cuz I’ll need the greenhouse, I thought. And I don’t know what to do. I’ll start here. And I just kept pushing forward little by little.”

During the time that most farmers are starting their seeds, in March and April, Chloe was working on her 24×14 hoop house and didn’t get to start all of the flowers she had in mind.

“But somehow you did it,” I said. By the end of summer, Rocket Rabbit Flower Farm was producing bouquet after bouquet of stunning arrangements that Chloe parsed out to her first CSA subscribers in the shady little garden behind the At Home Store on the town square. I saw big velvety zinnias, purpley flowering herbs, cheerful cosmos reaching out to tickle your face, spectacular dahlias, and a lot of happy customers.

I asked Chloe how she pulled it off. “I’ll tell you,” she said warmly, “I had a couple very sweet teenage boys work with me, children that I’ve known since they were babies, and they’re delightful. Being around that kind of energy was really amazing and helpful.”

But it was far from easy. “I would look at the boys every morning and I would say, ‘Listen, boys. Every day I wake up and I don’t feel like getting out of bed. And it all feels terrible and I never feel like I’m doing anything. I get my coffee and I put my pants on, I start preparing for your arrival, and I stand outside and I look at everything and see that it all looks impossible. But I keep pushing forward. I’m telling you this so that we can mark it all together, so that I can remind myself that progress doesn’t always feel like progress. It feels awful some of the time. Getting stuff done and living your life is not always beautiful.

“I’m sure people can relate to that,” she continued, “especially last year. It feels like slogging. But I’m a bit of a masochist,” she laughed. “Maybe I sort of like pushing through the challenge, you know?”

“Did any part of this venture surpass your expectations?” I asked her.

“What was sort of a delightful surprise was the fellowship around it. Getting to hang out with young people on a regular basis was just faaaaantastic. We’re yelling and screaming and rocking out in the countryside among the flowers. Being outside during the pandemic, especially in rural Iowa, I sorta lucked out, to be honest.

“Another surprise was my wonderful friends here in town who provided me with sooo much moral support. And being able to see people on a weekly basis who subscribed to our fall CSA was really wonderful. Because I wasn’t often putting myself in positions where I would randomly see people.”

What’s New in Round Two?

“This year I’m giving it the full force. I’ve got the website, and I’m doing the spring CSA. The tulips will be popping off at Easter.” And daffodils like you’ve never seen.

“Then in June and July I’m going to do a summer CSA—that’ll probably have sweet peas and a little bit of ranunculus and some anemones.” I feel like she pulled a fast one on me and is now discussing exotic sea creatures. “And in August and September we’ll do the fall CSA.

“We’re in the control years,” Chloe reiterated. “I chose a lot of stuff last year because it was surefire. I wasn’t gonna take any risks.” But she’s excited about trialing some new things out this year, and integrating more of the blooms she really believes in.

And for another delightful twist, “the lovely Diane Porter,” Chloe said, gushing, “the birding lady who I’ve known forever and ever, offered to give me some more native species seeds—coneflowers, asters, and liatris—they’re spikey, pink.”

Even though Chloe has had more time to plan this year, she said it’s hard not to be able to offer everything that people want right away. Luckily, she is incredibly creative and pretty darn skilled at shooting from the hip. “If people can trust that part of me, then they can be confident about the selection of flowers I’m choosing for their bouquets.”

In my opinion, her bouquets knocked it out of the park last year—even when she felt like she was moving backwards through mud. “I want to bring people something surprising,” she said. “I think I’m at least good for that.”

Starting in May, you’ll find Rocket Rabbit at the Fairfield Farmers Market. “Single stem, single variety bouquets, as well as mixed-market bouquets,” Chloe said. “I get to meet people and talk to them about flowers!”

Near the end of our conversation, Chloe got quiet. “I’ve spent a lot of time feeling guilty about loving flowers so much. I was a landscaper with my mom for a long time, and when I told people what I did, there’d be an element of, ‘Oh, you just make things look nice?’ Like working with plants or flowers was, you know, a floofy job. But in that Vipassana course, I really defined for myself what it is. I just. Love. Flowers. And I want to be able to share that with people.”

“I get it,” I told her. “I have yard space this year to start a vegetable garden, but all I want to do is fill it with blooms.

“There is no function without form,” she reminded me. “They go along together! A plant can’t get pollinated if a beautiful flower isn’t there to get the pollinator there. It’s not that functionality takes priority over form. They’re almost binary—like the zeros and the ones of the world. And the flower to me is the zero. I’m all about the zero. Whoever was the industrial designer of the flower had it going on—it’s the most classic, most timeless example of form being just as important as function. I mean, look at the columbine, it’s this perfect little shrimp-colored . . . lantern!

“And god forbid we want to bring a little of that perfection into our houses, right?” We had a good laugh.

“Part of the reason, too, why I want to share the flowers with people is because we’ve just been so bummed out for so long. The endless political inflammation and flare-ups of all different kinds. And then we have a pandemic, we can’t even hang out.

“I didn’t know if people would wanna have flowers, but I offered them, and they liked it. It’s nice that it can be part of my financial goal too, but it’s really the beauty part of the sharing that I love so much. And the process of it.

“I really do believe in the flower power. I do.” 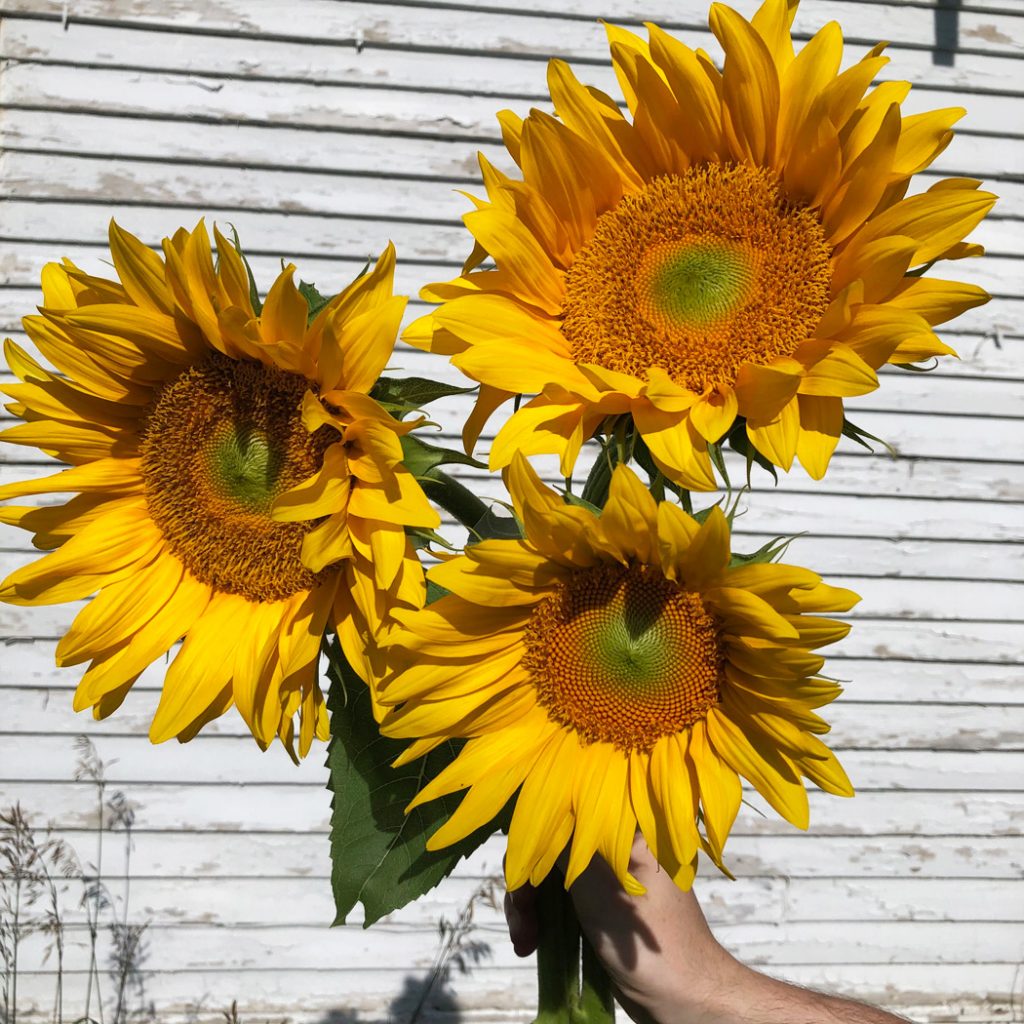 Visit RocketRabbitFarm.com to learn about their CSA (Community Supported Agriculture) subscriptions or visit them beginning in May on Saturday mornings at the Fairfield Farmers Market in Howard Park.

SXSW Online 2021: A Virtual Smorgasboard of Art and Tech Events

Jolene Buchheit: Hearing Readers Laugh Is Music to her Ears