With its small cast of heavy hitters, this brave, fictional drama jumps headfirst into the deep end to revisit a horrific crime that has become a deadly national syndrome: mass murders at public schools. Stay with me.

Mass begins six years after a single shooter kills ten fellow students, and then himself. Two of the families shattered by this tragedy are still seeking answers, and the two sets of parents agree to meet in person. What makes this confrontation unexpected is that one couple happens to be the parents of the shooter.

Do we really want to witness this meeting? The first answer is yes—and not just because the issue is topical. The dialogue and delivery are so authentic you’ll forget you’re watching fiction. And more important, this film considers something other than thoughts and prayers for the victims’ families. What would that be?

Mass presents a challenge that most filmmakers would never tackle. But Francis Kranz, a veteran actor of the stage and screens wide and small, dared to try. As a new father disturbed by the 2018 shooting in Parkland, Florida, Kranz looked deeper into school tragedies. And listening to parents of shooters made a different impression than the assumptions we tend to make. As a first-time screenwriter and director, he crafted a scenario that paused to consider how, or if, we can reconcile the vantage points of opposite sides. 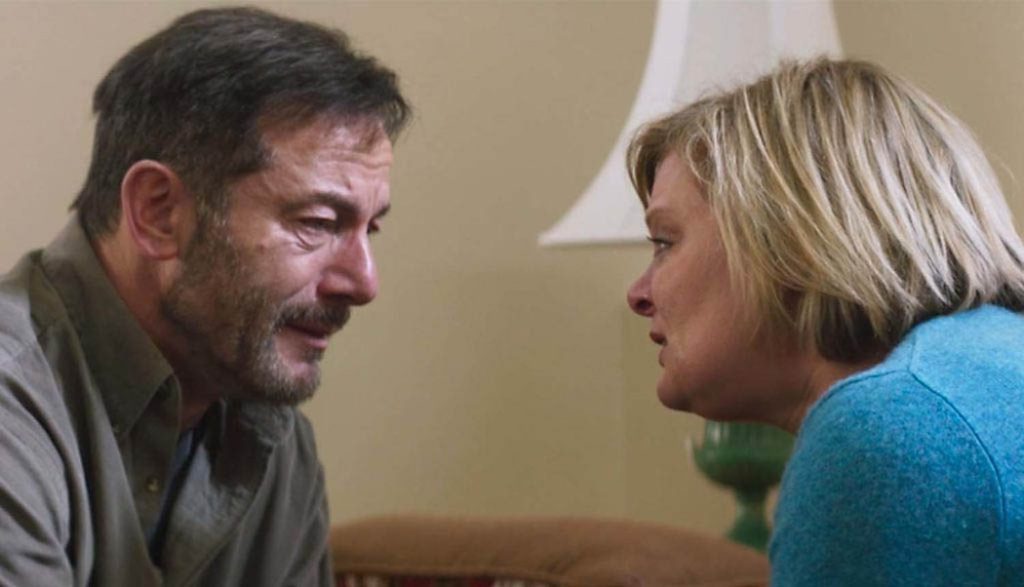 Kranz staged his low-budget, 14-day shoot like a play. The setting for the highly charged meeting is a sparsely furnished room in a rural church. And he selected an extraordinary cast of four high-octane actors, each with a long pedigree of credits that includes live stage experience. He also trusted them with the freedom to tweak the dialogue.

Ann Dowd (Linda) and Reed Birney (Richard) harness the unimaginable complexity of the shooter’s parents. Their son Hayden is a mass murderer, which made them pariahs. And Hayden is dead. And apparently their marriage did not survive the avalanche of stress.

As the victim’s parents, the mighty team of Martha Plimpton (Gail) and Jason Isaacs (Jay) approach the meeting with equal parts sincerity and turmoil, and a yearning for a sense of peace. They have so many questions about how this could have happened. But will the answers make them feel better, or worse?

The impassioned conversation never debates laws or guns; the meeting is entirely personal. But the four parents are determined to keep it civil. It begins in a cordial but awkward formality, progressing to earnest exchanges and then disagreements, all leading to exasperation and anger, which was bound to happen. Like a deep-sea diving expedition, the dialogue penetrates the submerged, raw emotions of four desperate people trying to recover from their losses and feelings of betrayal. And they all want the same thing: to find their way back to normal.

Should you see this film? The second answer is a qualified yes—watch it when curiosity draws you. The meeting we witness is more searing than soothing, the pain is palpable. You’ve been prepped. But this confrontation has its own destiny. Early in the film, a brief exchange between Jay and Gail offers a clue. It’s easy to miss, but it can explain how the meeting ends. And maybe, just maybe, it can take us somewhere unexpected that makes the journey worth the ride.

The Wild World of NFTs: It Just Keeps Getting Weirder

Gertrude Stein: An Author's Fondness for Her Iowa Friends