On March 3, 1969, the United States Navy established an elite school for the top one percent of its pilots. Its purpose was to teach the lost art of aerial combat and to ensure that the handful of men and women who graduated were the best fighter pilots in the world. They succeeded. Today, the Navy calls it Fighter Weapons School. The flyers call it: TOP GUN.

Tom Cruise was 24 when he was cast in the leading role of Pete Mitchell, a.k.a. Maverick, for the 1986 feature film Top Gun, which soared to number-one film of the year. Maverick is a fighter pilot in training whose rebellious nature lives up to his call sign (nickname). Before watching the Top Gun: Maverick sequel, I viewed the original (my first time), which offered continuity. And while it wasn’t really my taste, I appreciated it.

Top Gun is a high-octane adventure about training fighter pilots to succeed or die. Its macho culture is fueled by war planes with explosives and the teamwork of hot-and-shirtless beach volleyball. And it depicts a naval fraternity inspiring cooperation and competition—because, at least in the movies, every Top Gun wants to be number one. 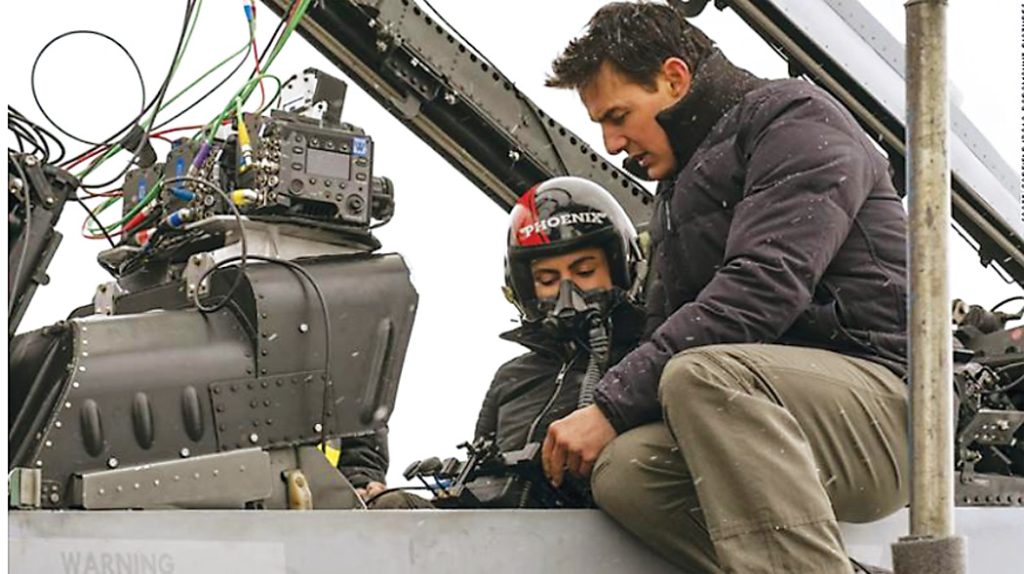 Now 36 years later, Top Gun: Maverick sustains and updates the macho culture while adding a woman pilot onboard. This ambitious film is made for the big screen (my first theater viewing in two years; hint: go on an empty Monday). Maverick checks all the boxes for thrilling storytelling and viewer engagement, thanks to director Joseph Kosinski, along with five screenwriters plus two from the original film: Jim Cash and Jack Epps Jr. And one more writing credit we’ll mention later. Maverick is a high-stakes adventure with well-written dialogue peppered with comic relief. And infused with emotional depth—not too much, not too little—the journey feels so human.

In addition to producing the film, Cruise resumes his title role. Maverick is still a pilot, doing what he loves. But his wildcard persona is a barrier to advancement opportunities, except for assignments that would retire him from the big blue sky and keep him tethered to the ground. Until he’s offered a challenging task: preparing top young pilots for an impossibly dangerous mission. Fasten your seat belts for this uncharted course that broadens the scope of the story and fuels the thrills.

But Maverick has issues. A fighter pilot with attitude raises safety concerns, and Maverick loves to mess with the rules. Which is why his supervisors are always dressing him down. And why Iceman used to call him dangerous and his old flying partner worried about getting home safely to his wife and kids. Can a rebel pilot be trusted? Reformed? Competence and good luck seem to allow him second chances. And coincidentally, Cruise, like his character, welcomes mischief. For some examples, Google “James Corden and Tom Cruise.”

Finally, from where do Top Gun and its sequel draw their ideas and inspiration? Here comes that additional writing credit. Israeli writer Ehud Yonay published this story in California Magazine in 1983: “TOP GUNS: At Mach 2 and 40,000 feet over California, it’s always high noon,” which NPR describes as “A character-driven tale of two ambitious Navy fighter pilots.” Paramount purchased the story rights from Yonay (his wife and son took ownership after his death in 2012). And Top Gun, the movie, was born. And the 2022 sequel? Pandemic and production issues delayed release for three years, exceeding Paramount’s 2020 copyright expiration. But the studio ignored expiration notices from Yonay’s family. So . . . yada yada yada, the family is suing Paramount for profiting from unlicensed content. And asking for a share in the profits.

Paramount’s defense: 1. Top Gun: Maverick isn’t “obviously derivative” of the magazine story. 2. (But just in case it is . . .) The sequel was “sufficiently completed” before the copyright expired.

My two cents on #2? Sorry, copyright law wasn’t covered on Law & Order, but isn’t content ownership required for selling tickets to the movie? I see a settlement on the horizon for “an undisclosed amount.”

Is this the part where we choose sides and place our bets? Before Paramount supporters rally film fans to see Maverick as often as possible to contribute to a worthy cause, here’s a reference: gross box office to date (shy of eight weeks) is $1.23 billion. Yes. Paramount’s highest-grossing film ever, while ticket sales keep rolling in, may be a new Hollywood record (since Titanic). Even subtracting overhead (budget of $170 million, plus investor payouts, movie theater percentage, fighter-jet bumper stickers, etc.), Paramount is probably in the black. But as the Hollywood industry adage goes, you can’t count your chickens ’til you’re done being sued.

Business aside, do see the movie. Repeat viewings optional.

Tunes for a Chillin' Summer Evening: An Off-the-Beaten-Track Song List