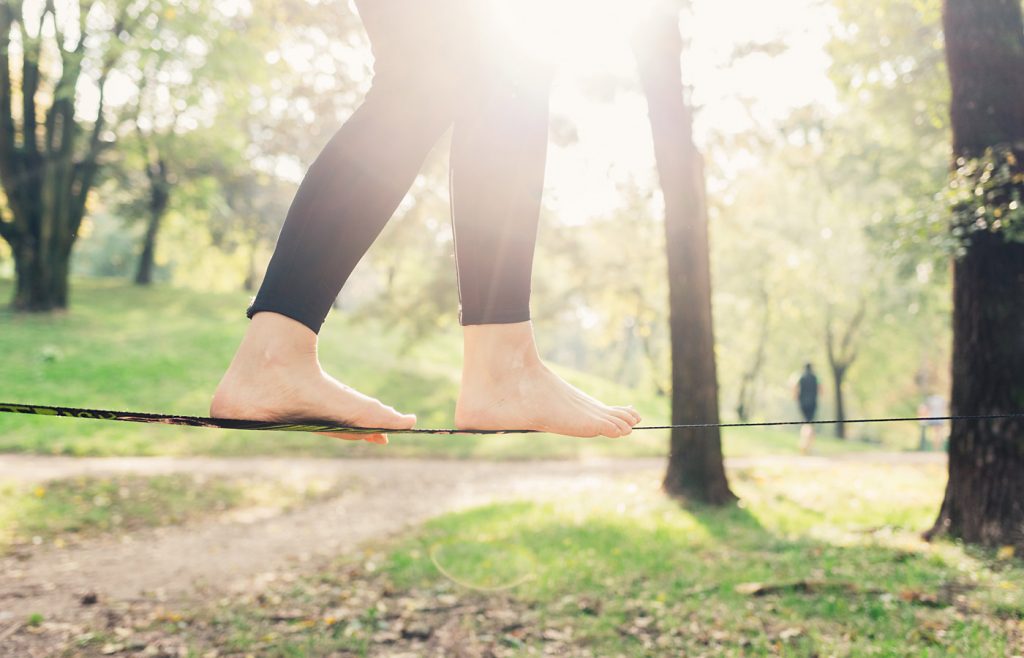 Not long ago, as my husband was searching for his car keys, I spotted them on the railing of the entryway stairs. “I found them!” I shouted, while bounding down the oak stairs in sock-clad feet to grab them. I looked at him instead of where I was going. Guess what? I slipped and fell. Multitasking on stairways is a dumb idea. Happily, I received only purple bruises for my folly, no sprains or broken bones.

My friends are falling down, too. One banged onto a concrete floor while hauling laundry down her basement steps. Another hurt her ankle: she stuck her foot in a pothole while trying to resume riding her bike after stopping at a red light. Still another slid down her stairway and has her arm in a sling. Others have similar stories. We didn’t all suddenly swallow clumsy pills. What’s happening to us? And what can we do about it?

First the bad news: People’s senses degrade as they age, and that includes a sense you may not know you have—proprioception. English neurophysiologist Charles Sherrington, a Nobel Prize winner, coined this term in 1906, but the sense itself has been around maybe even longer than our sense of smell.

What is proprioception? Close your eyes. Now thrust your left arm toward the ceiling and wave it around. Even though you can’t see your left arm flopping about, you know it isn’t dangling at your side. Sensory receptors in your muscles, tendons, joints, and skin tell your central nervous system where your arm is and how fast it’s moving. When this sense of where your body is in space—proprioception—declines, you’re more likely to step in potholes or tumble down stairs.

Now the good news: Balance exercises enhance proprioception, too. Enroll in Nia, pilates, yoga, or tai chi classes, and you’ll be less likely to fall and probably less likely to sustain serious injuries if you do.

What else can you do to avoid accidental spills? Reconsider your footwear. In our youth, my brother and I never wore shoes in the grandparents’ apartment my dad added onto our house. When our sock-clad feet slipped as we careened across the bare oak floors, we leapt up, sped up, and cracked up (laughing). We fell on purpose over and over again.

But falling down in your fifth decade or later isn’t the same as falling in your first. Over 80 when they moved in with us, my grandparents never slipped on those slick oak floors. Their thick-soled, tightly laced black oxfords made sure of that. Sensible footwear today isn’t as ugly as it was then, so if your floors are uncarpeted and slippery, wear shoes in your house, not just socks, which facilitate falling. Does tracking dirt indoors disturb you? Then reserve some shoes for indoor-only wear. Or go barefoot indoors. It’s as much fun today as it was long ago. Outdoors, in slick weather, opt for low-heeled boots with serious treads.

Age diminishes visual acuity, also, so pay attention to lighting. Hallways, stairways, and bathrooms should be well lit. And clutter-free! (How’s it going, clutter-prone readers? Remember, National Clutter Awareness Week is March 21-28, 2010. Report your progress and check on mine by visiting my blog at www.iowasource.com.)

Don’t dump stuff “for now” in places where you routinely walk. Don’t put throw rugs or anything else on or at the top or bottom of any stairs. Don’t block access to the shower, tub, or toilet with a bucket, a mop, and a rack of wet lingerie. (Okay, I confess! I routinely do this, but I promise I won’t any more!) Wipe up spills immediately, and don’t let electrical cords snake around the room where they’re liable to coil themselves around your ankles and pull you to the floor.

The National Association of Mutual Insurance Companies (NAMIC) website contains a checklist for avoiding falls at home. NAMIC’s website identifies falls as the leading cause of accidental death for people over 65 and the number one reason children end up in hospital emergency rooms.

Thirty-three years before I was born, a fall killed my grandma. My dad died on January 2, 2005. Five days earlier, he fell and sustained a head injury that made his face look exactly like Mel Gibson’s war paint in Braveheart. With Dad lying beside me in a coma, I watched New Year’s Eve fireworks light up Pittsburgh’s skyline. Every life must end sometime. But Dad would’ve enjoyed those fireworks, and Grandma would’ve liked to raise my mom.

What Bodywork & Nutrition Can Do for Spine Health