“I’m convinced a child is not a problem. A child is an oportunity. A child has infinite potential. A child is like a shrine,” says Father Gabriel Mejia, who is the subject of a deeply moving new film, Saving the Disposable Ones.

In the mid-80s, learning that 50 milllion homeless children live in South America, Father Gabriel Mejia devoted his life to helping these kids. He says it felt like an impossible thing to do yet he felt an urgency to act. Since then, he has quietly rescued 100,000 children from the streets of Colombia, offering shelter, food, and the gift of love. “The basic therapy is love,” he says. “Love is the imperial medicine for any illness or disorder. When a child feels they are welcome, when a child feels an educator is concerned about them, the child who came from violence and hostility of the streets, from being mistreated and who became aggressive, they change. The child changes.”

The world premiere of Saving the Disposable Ones will be presented Thursday, April 8, 2010, 7:45 p.m. at the Sondheim Center in Fairfield.“Surviving on the streets is a harsh business,” says the film's director, Stuart Tanner. “Children as young as six fall into prostitution and many escape the torments of their existence by sniffing glue.” Father Gabriel has set up 47 shelters where children can get cleaned up and have a decent meal. They’re not required to stay, as Father Gabriel has found that the children must want to change for themselves. As these “unwanted” children begin to face a brighter future, the glow on their faces tells the whole story. This is an extraordinary film you won’t want to miss. 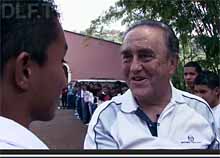 “I believe the solution is within every person,” says Father Gabriel in the film. “Within each one of us there is a sanctuary, and the moment we take refuge there, we can enter it. Solutions come from every person. When we put them together, there are many solutions. We must globalize love.”

Meet Father Gabriel at the April 8 premiere! Read more about the film at the David Lynch Foundation