Most Iowans are likely familiar with Pella’s Tulip Time each May, but less so with the area’s 165-year history and the reach of Dutch culture. Pella Dutch: Portrait of a Language in an Iowa Community, by Philip E. Webber (University of Iowa Press), is a charming and readable book that brings the early chapters of this community’s story to life.

Webber, a professor emeritus of German and linguistics at Central College in Pella, interviewed more than 150 speakers of Pella Dutch for this study, which was first published in 1988. He has carefully preserved information about the local linguistic traditions and how the Dutch language has developed as Pella Dutch. In this expanded second edition, updated research combined with anecdotes shared by interviewees allows the reader to experience something of the wit, humor, and experiences that make up the community’s  character.

The Dutch immigrated as communities and maintained their communal interdependence. They sought out not just fellow Netherlanders but others from their home provinces. As might be expected, these subsets of communities nurtured small prejudices and stereotypes about class structures or others’ places of origin. For example, people from Gelderland were known as “a contrary bunch” and the Frisians as “stiff headed.” Whenever two people crossed these cultural lines and a “mixed marriage” resulted, it was the source of talk.

Still, solidarity does exist. Webber points out the local residents’ understanding of which communities lie within or outside the scope of Dutch influence. This is based partly on ethnicity and partly on loyalty to the Reformed or Christian Reformed Church. Knoxville and New Sharon, despite their Dutch populations, are considered outside the range of Dutch influence. Otley and Peoria, on the other hand, fall within it. At one time, the small communities of Bethel, Olivet, Tracy, and Leighton would have joined them; however, “most such communities have lost their place on the map and can no longer be observed by an outside investigator,” says Webber. 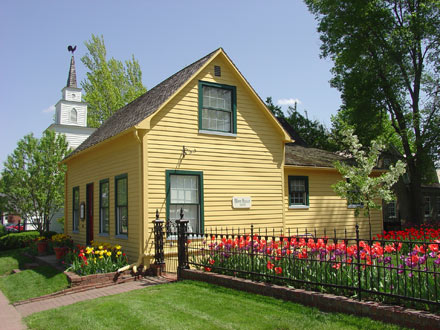 The Blom house in Pella.

Reverend Hendrik P. Scholte and religious separatists who followed him settled the town in 1847. Scholte did not encourage his people to deny their Dutch heritage—most church services continued to be conducted in Dutch—but he did encourage them to embrace their new home. In contrast to publications in other immigrant communities, Scholte published his weekly newspaper, the Pella Gazette, in English with limited Dutch language content. He frequently signed his journalistic pieces by adding the line, “An Adopted Citizen.”

For a time though, a darker period did descend on Pella. America’s involvement in World War I brought with it suspicion, and sometimes violence, against people of German descent. In Iowa, Governor William Harding issued a proclamation declaring it illegal to speak any language other than English in a public place. This included speaking at school, on the telephone, and in church services. It was regarded as one of the harshest such laws in the country. In late 1917 and early 1918, inspectors appeared unannounced at a number of Pella churches to check compliance with it. Many years later, some of the older citizens still recalled the assumption of disloyalty with visible emotion.

Pella is Iowa’s oldest Dutch American community. In reading Pella Dutch, one realizes how much has already disappeared from our midst. It is all the more fortunate that Webber has captured this information in his scholarly work. As thoughts of traveling to Pella to enjoy Tulip Time and Dutch letters from a local bakery approach, consider seeking out Webber’s book as an additional treat.

It's Easy to Make Pie Dough, with Beth Howard, the Pie Lady