Food, Restaurants and Recipes
May 3, 2012
by Sarah Kingsbury
0

Beth Howard, proprietor of the Pitchfork Pie Stand at the American Gothic House in Eldon, Iowa, and author of Making Piece: A Memoir of Love, Loss & Pie, talks about breaking the rules to make good pie crusts, why perfection is actually a bad thing, recent pie disasters, and why we should all just relax and not be so hard on ourselves.

Sarah Kingsbury: You know, a lot of people are actually afraid to make pie. They think making crust is too hard. Do you have any words of reassurance for them?

Beth Howard: Yeah, don’t follow the recipe, cause that’s what trips people up. “But I added 5 tablespoons of water, ’cause that’s what the recipe said”—but maybe the recipe isn’t right, maybe you have to go by the environment around you. Maybe it’s very dry where you live, so your flour’s going to need a little moisture. . . . There’s so many variables, so I say use the recipe as a guideline, but please pay attention to what’s in front of you and follow your own common sense.

For example, one of the common problems with dough is that it cracks when it rolls. Well, ’cause you didn’t add enough water. “But I added how much the recipe said.” Well, add more, that’s okay. I think the main thing is just give yourself permission to step outside of the hard and fast rules.

Another common problem is that the dough sticks to the rolling surface and that drives people crazy, that’s what usually drives people to the store to buy the premade crust. And I say, sprinkle your surface liberally with flour, don’t be stingy on that flour, because that’s what’s going to help your dough. And then be very patient and gentle when you’re pulling it off of there. I’ve seen people just try to rip it up too fast off the counter. You have to keep observing what’s going on—if there’s a little sticky bit then you have to scrape underneath and lift the part off the surface.

And the other thing is, don’t overwork the dough; it’s not bread, so you don’t want to knead it, and if you overwork it, it can get very tough and therefore very hard to roll.

So those are the main three things that will fix pie dough that make people think that it’s difficult, when really it’s quite a quick process. You don’t want to spend a lot of time mixing it at all; let it hold together and stop. 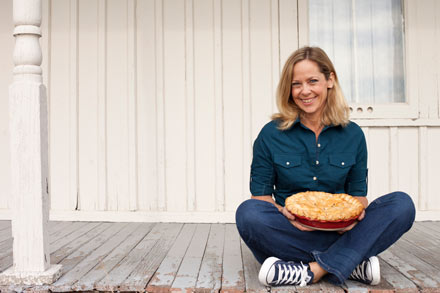 Beth Howard bakes pies in the kitchen of the American Gothic House in Eldon, Iowa. (photo by Kathryn Gamble)

What is it that makes you so good at baking pies?

I don’t think that I’m such a great pie maker, I just had a good teacher. And then I’ve made a lot of pies since, and now I’m able to teach those lessons to other people. And also I did learn from my teacher that it should look homemade, and I love that concept that then helps people relax, too—that pie is not about perfection, it doesn’t have to look perfect; in fact, the less perfect it looks the better, the more delicious it looks.

Even the most experienced bakers have times when things don’t turn out well. What are some of your worst pie disasters?

Oh, you mean last week? (Laughs) Last week, when I had an LA Times reporter in my kitchen and I was trying to him how to make a pie, we were doing strawberry pie and I just absolutely did not use enough cornstarch. The strawberries got so juicy and it was just completely runny and soggy and essentially inedible, I mean, the thing just couldn’t be eaten! So, yeah, recently. I’m not above mistakes.

I gave a demo at the Iowa State Fair last summer. I forgot to bring a pitcher for ice water, so I didn’t have cold water with me. So somebody in the audience ran and got me some water and it was warm. Between the warm water and the hot day, my pie dough was a crumbly mess. (Laughs) In front of all these people, with a microphone and everything, trying to show them how to make pie dough, and it just completely disintegrated! And I couldn’t get it to roll and when I tried to pick it up it came up in pieces and it was just a melted mess, basically, and people were so sweet about it. People were like “Oh, we’re so relieved to see that you make mistakes too. That it doesn’t always turn out for even the best of bakers.”

And actually, I look back at that day with a good sense of humor because I think it was classic. I think it was a great lesson for everybody: Yeah, even the best pie makers have their bad days and so that takes the pressure off other people. It reminds that it’s not about perfection, it doesn’t always turn out great, and so don’t be so hard on yourself, because even [for] people who’ve been doing it forever, it doesn’t always turn out right. I think that helps to take some of the fear out it too. Maybe that actually inspires people too!

I’ve always thought that when you bake something to share with others there’s something magical that’s created, beyond the baked good itself. Is that your experience?

Always, because people appreciate it. You know, you go to a dinner party . . . and you bring something homemade, and people know that you took the time to make it yourself. . . . There’s something heartfelt about that, something generous about that, more so than just bringing a bottle of wine or picking up something from the local bakery.

An Artist Gives Back: The 5 Year Project | Khadi-Cloth Art