The Turner Hotel, which burned down in 1967, once stood on the site of the Fairfield Arts and Convention Center. Photo used by permission from Fairfield Iowa History Center.

In 1997, Suzan Kessel and Sally Denney began to work together as a team, taking steps to gather community support for a proposed performing arts center. As more and more community members joined this group effort, attracted by the creative and economic possibilities such a facility would bring to Fairfield, the project began to coalesce. But fortune truly smiled on the project when a talented Fairfield-born architect came along to forge this myriad of possibilities into one community building.

During this exploratory period, however, the scope of the building was as yet undefined.

One of the first people Suzan and Sally approached was Art Association founding member Nan Cameron. Nan jumped right in and never stopped. Also lending his support was Ken Norton, a member of the Jefferson County Fair Board who endorsed FACT’s summer performances at the Fairgrounds. Like Ken, Korwin Hinshaw was on the Fair Board and had a strong personal interest in the project. Long-standing FACT board-member Deb Glass was invited to join the core planning group. She, along with everyone else on the new board, was enthusiastic about the proposed center and eager to have it manifest.

Many early meetings were devoted to brainstorming sessions. But soon the informal chats and animated discussions gained momentum as the meetings moved to the comfortable conference room of the Farm Bureau the business owned by Pat Kessel, Suzan’s husband.

When attorney Sarah Cochran joined the group, her legal expertise proved extremely valuable. The City of Fairfield was represented by then Mayor Bob Rasmussen, a de facto member, and by City Councilmen Jeff Harris and Tom Stanley. Joneane Parker of the Jefferson County Hospital, then FAA president Jane Mc- Nerney, and dance enthusiast Coralee Dey generously gave of their time and energies.

Next, by-laws for the group were drawn up and officers elected, with Sally as the first president, Suzan its first secretary, and Nan its treasurer. Deb Glass later became treasurer and helped the grant-writing team as they assembled information for a five-year plan. Dr. Bob Tree, a supporter of the project from its very inception, made generous contributions to help cover operating expenses.

In preparation for the new building, the board queried similar communities throughout the Midwest and prepared site visits to ones of interest. They discussed Local Option Tax, which was not yet in existence, and selected a temporary name, "Jefferson County Civic Center," officially incorporated on May 15, 1997. Even at that early stage they had achieved official nonprofit 501 (c ) (3) status so that donations were tax deductible. Contributions started coming in motivated by word of mouth, with additional contacts made to interested individuals and businesses.

To find out what else the proposed arts and civic center could provide, the group sent out a needs assessment survey to individuals and businesses. They were working hard to create a building that would be useful for virtually every segment of the community. The Fairfield Concert Association, dance schools, Fairfield Art Association, and many businesses and individuals contributed their feedback.

A comprehensive mission statement was discussed, drafted, and finalized. But even then, ideas and suggestions still poured in: "Don’t you think…?", "Wouldn’t it be wonderful if. . . ?"

Then, almost miraculously, came a game-changing breakthrough—an architect. "This project moved forward when the right people came along to solve the problem of the moment," Suzan said.

When Martha Bell arrived, in February 1998, she gave the project a definite shape. The daughter of Dorothy Bell, one of Fairfield’s cultural champions, Martha had attended Fairfield High School before going on to study architecture and join a practice in Chicago. 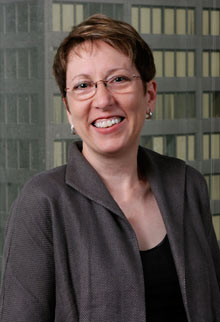 Architect Martha Bell grew up in Fairfield and now practices in Chicago.

Martha Bell felt deeply about the project. When she met with Suzan and Sally, she thought, "What a great thing they are doing! They really have a vision." And she wanted to be part of it. Delighted to offer her professional expertise to her hometown, she gave of her time graciously and magnanimously, commuting all the way from Chicago to attend meetings.

On one visit, Martha met with Suzan and Sally and their entire group. "As an architect, you want to hear from the lead group where they want to go with this thing, so that you can really understand what their goals are," she said. "Having that in mind, you then follow up with interviews with each organization." These talks helped Martha nail down exactly how the space would work, how big it needed to be, and how to efficiently share facilities. After gathering as much data as possible, Martha came up with a plan.

What previously had been nebulous in people’s minds became clear and specific. "It’s like taking a photographic negative, putting it in developer fluid, and slowly watching the picture emerge," Martha said of the programming process.

What resulted was a building designed specifically for this community. In the developed image, everyone now saw clearly what they had been mulling over for many years.

To read the entire series, go to:

Part I: Fairfielders Dream About a Performing Arts Venue