Meskwaki tribe member Jerry Young Bear (with daughters Jessica and Jerika) is working to maintain the genetic purity of their tradition corn. (photo by Bob Campagna)

In Iowa, corn is king. In  summer, one can drive hundreds of miles in all directions—east, west, north, and south—and see vast green fields of corn, along with soybeans, planted fence row to fence row.

To some Iowa natives, corn is more than king. It’s sacred. The Meskwaki Native Americans, based in Tama, have grown corn for centuries, making today’s massive industrial corn production a small dot in the timeline by comparison.

The Meskwaki’s traditional corn is called Tama Flint, which is known for its hardness and red color.

But today the corn is threatened by cross-pollination from genetically modified corn, which now dominates U.S. agriculture.
Meskwaki tribe member Jerry Young Bear is trying to preserve the genetic purity of his tribe’s corn. “Corn has significant value to the Meskwaki people in our culture, tradition, religious ceremonies, and as a major food source,” he says. “We want to take care of our corn to make sure it is viable for future generations.”

The sacredness of Meskwaki corn is expressed in the story of how the tribe received it. Two tribe members were hunting in a forest when they met a beautiful woman. They thought she was hungry so they gave her deer venison to eat. She thanked them for their kindness and told them to return to the same place in one year and they would receive a gift. After a year, the hunters and other tribe members returned to the place. They found sacred corn at the spot where the woman’s right hand had been, sacred beans where her left hand had been, and tobacco at the place where she had been sitting.

The Meskwaki have been growing Tama Flint corn ever since, says Young Bear.

Origins of the Meskwaki

Unlike most Native American tribes, the Meskwaki people do not live on a reservation. They own their own land, about 7,000 acres in Tama, Iowa.

The Meskwaki have lived in the upper Midwest for centuries. They were originally two separate tribes, the Meskwaki and Sauk. The tribes joined forces in 1735 to fend off Europeans and other Indian tribes. At that time, the two tribes moved south from Wisconsin into Iowa, Illinois, and Missouri.

Following the Black Hawk war of 1832, the U.S. government officially combined the two tribes into one known as the Sac & Fox Confederacy. The Sac & Fox were forced to move to a reservation in Kansas in 1845.

However, a few Meskwaki remained in Iowa, and in 1856 the Iowa state government enacted a law allowing them to stay. A year later, the Meskwaki purchased their first 80 acres of land in Tama County, which is named for Taimah, a Meskwaki chief in the early 19th century.

Today, the tribe is known officially as the Sac and Fox of the Mississippi in Iowa, although members still refer to themselves as Meskwaki. There are about 3,500 tribe members.

According to Jerry Young Bear, owning their own land has helped the Meskwaki maintain their cultural traditions. “We weren’t subject to outside influences and we’ve been able to adhere to our traditions and rules and regulations.” 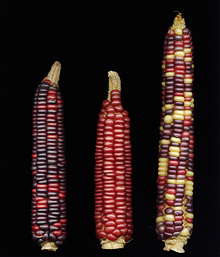 Tama flint corn has kernals of red, blue, and purple.

One of those traditions is Tama Flint corn. The corn gets its name from its tough outer shell that is hard as flint. Tama Flint has red, blue, and purple kernels, while another Meskwaki corn, Sac Blue, is deep red and white.

“It’s the type of corn that explorers would have seen in the Northeastern United States, says Mark Millard, maize curator at the U.S. Department of Agriculture’s Germplasm Resources Information Network (GRIN) in Ames.

Early settlers in the U.S. grew a softer dent corn, and this was bred with the flint corns, which eventually led to today’s dent corn varieties that are grown on millions of acres each year.

The Meskwaki people plant Tama Flint in their gardens. But in recent years, farmers have also been growing yellow dent corn on 2,000 acres of the tribe’s land. Pollen from the yellow corn, which is likely GMO, is now contaminating the traditional corn. Several years ago Jerry Young Bear started seeing yellow kernels in Tama Flint corn and became concerned that the genetic purity of the heritage corn may be threatened.

He contacted Millard at GRIN about the problem.

GRIN is a network of organizations and people dedicated to preserving the genetic diversity of crop plants. It collects plant germplasm—seeds and living tissue from which plants can be grown—from all over the world. Curators such as Mark Millard preserve, evaluate, and catalog this germplasm and distribute it.

“We provide free samples to anybody who wants to research or grow them and germplasm to plant breeders who are developing new varieties,” Millard says.

The GRIN office in Ames has a collection of 20,000 corn varieties, including Tama Flint and Sac Blue.

Millard gave 1,000 seeds of Tama Flint to Young Bear, who then distributed them to tribe members to plant in their gardens.

“They may have not been growing enough plants to maintain the genetic diversity,” Millard says.

Young Bear plans to bring the cross-pollination problem to the tribal council. “We want to see what can be done to protect Tama Flint, such as adding buffer zones to avoid cross pollination,” he says. “The council appreciates the value of heritage corn.”

He is optimistic. “Bringing back the genetics of heritage corn is difficult but not impossible.”

The tribal council hired Jennifer Vasquez, a research assistant at Iowa State University, as a local food coordinator to encourage production of grass-fed beef and vegetables on the tribe’s lands. Community gardens were planted this spring. Her aim is to help the tribe diversify its economy with local food projects. In the process she hopes this will improve the health of Meskwaki people and their environment.

Vasquez also recognizes the importance of corn to the tribe. “I was struck by how many corn plants people are growing,” she says, adding that more awareness is needed about the threat to Tama Flint. “Cross pollination is an issue. People don’t know what issues with GMOs are and how prevalent they are.”

This year Jerry Young Bear planted his own garden with the “three sisters” that are valued by Native Americans: corn, beans, and squash. Like many Native Americans, Young Bear has health challenges, including type 2 diabetes and hypertension. He says he is losing weight and exercising to improve his health, and he recognizes the importance of healthy food.

Young Bear says his goal is simply to “do the right thing” by protecting Tama Flint corn. “We need to keep our heritage and traditions alive,” he says.

Ken Roseboro is editor of The Organic & Non-GMO Report.